Notes From The Delhi Farmers’ Parade 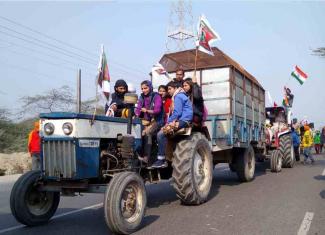 Throughout the extraordinarily cold night of 25 January, farmers at the protest sites at the Singhu, Tikri, and Gazipur borders remained awake till late in the night decorating their tractors and trolleys and planning and preparing for the parade.

At Tikri on 26 January, All India Kisan Mahasabha National President Comrade Ruldu Singh, as well as comrades Gurnam Singh and Jasbir Kaur Nat of AIKM the were at the very forefront of the tractor parade. At Gazipur, AIKM General Secretary Comrade Rajaram Singh, along with AIKM leaders Comrade Purushottam Sharma from Uttarakhand and Comrade Ishwari Prasad Kushwaha from UP were at the forefront of the parade.

All three processions were greeted with enthusiastic welcome and hospitality by Delhi residents throughout their route. At various points along the routes, the Delhi units of the AICCTU trade unions and student-youth organisations AISA and RYA had organised welcome gatherings, with banners and slogans and refreshments. The Tikri farmers’ procession were greeted and felicitated by the AICCTU-AISA-RYA delegations in this manner at Najafgarh. Similar demonstrations of solidarity were organised at Swaroop Nagar and Singhaula for the procession that began at Singhu, and at Apsara Chowk for the procession that began at Gazipur. Apart from this, comrades told us that people gathered on their roofs and balconies to shower flowers and petals on the farmers’ parade as it passed through residential areas.

Comrade Sanjay Sharma, V Arun Kumar and I had spent the night of the 25th January at Singhu, preparing to cover the parade for Liberation and for the CPIML’s social media pages. I will share some of my impressions of this unparalleled experience.

We spent the night at Singhu in the Shaheed Bhagat Singh library tent, where AICCTU and AISA comrades were up all night preparing decorations for the tractors and trolleys. Banners featuring a cartoon depicting Modi as a puppet controlled by Adani and Ambani by an AISA activist Neha Tiwari were much in demand – with farmers coming up asking to display it on their trolleys. Our comrades decorated one AIKM trolley as a float featuring large cut-outs of Bhagat Singh, Ashfaqullah, Chandrashekhar Azad, Dr Ambedkar, Che Guevara, Shaheed Udham Singh and Kartar Singh Sarabha – and this float became a centre of much attraction at the Singhu site and throughout the parade.

Comrade Sanjay and I, along with a young Chandigarh comrade Soumya, walked a couple of kilometres from the library to the tent where our Gurdaspur AIKM comrades were camped. There, we met a family of four – father and mother, and two daughters, one about 13 and the other about 9, who had made a two-day journey from Gurdaspur to Singhu on a motorbike, just to join the farmers’ protest. The two young girls were besides themselves with anticipation for the next day’s parade, pleading and persuading Soumya as well as the Gurdaspur comrades to somehow ensure a spot for them on one of the tractors.

We also met contingents of farmers from Tamil Nadu and Karnataka, eager to find a place right at the front of the parade.

The next morning, as I waited sleepily in the queue at a petrol pump bathroom, I noticed one man nudging a young girl and looking my way. A short while later, he came up and said, “This is the person whose book I gave you - Fearless Freedom!” Immediately, several other young women there greeted me with great enthusiasm, recognising the book. I was gratified to find young women readers of my book on women’s autonomy in the middle of this historic protest. They told me they had come, variously, from Patiala, Gurdaspur and Chandigarh to join the movement and were especially looking forward to the Republic Day parade.

Gulping down a quick cup of tea and a snack at one of the many langars briskly distributing food, Comrade Sanjay and I began making our way to the border where the parade would begin. Arun had already made his way, with his camera, to the very front. Waiting at a tea shop at the Singhu border, we met Jasbir Singh (who seemed to have phocomelia, congenital condition in which the legs are extremely shortened and traveled in a wheelchair). He told us he was from Gurdaspur and had been at Singhu for 25 days – “We’ve made our bungalow (kothi) here,” he joked. He showed me the flag of his Kisan Union which he had proudly displayed on his wheelchair. He added, “The line of tractors goes back all the way to Sonipat and beyond, there are so many thousands of them. You can only see 2 percent of them here. If these laws are implemented, it will badly affect everyone. People will go hungry, there will be an end to rations. Modi will have to agree to our demands.”

As the seemingly endless parade of tractors began, Sanjay and I joined an almost equally large number of farmers and their supporters marching on foot alongside the tractors. This was no militarised “march past” – it was exuberant, with slogans being raised, a whole range of songs including patriotic and revolutionary songs, as well as songs composed specially for the farmers’ movement and parade being played, while youngsters and quite a few old men and women also, danced to the tunes.

Sanjay and I walked alongside the parade for more than 10 kilometres. We were struck by the total absence of any cameras of the major TV stations. The internet connection appeared to have been deliberately slowed down, to make it difficult for us to report on the parade live on social media.

Throughout the route, wherever there were residential areas, the locals came out to clap and cheer for the farmers. I spoke to one set of young workers. One of them told me, his face beaming, “Everyone must admire the farmers – their spirit (jazba) and courage (himmat) both! We are besides ourselves with joy to see them and we wholeheartedly support their demands. We workers are farmers too – all of us come from farming communities in villages.”

We met a tractor full of women, being driven by a young woman. Along with trolleys and tractors full of women, we met innumerable women walking alongside the parade, waving flags and raising slogans.

At Khampur (a village in Delhi), we saw an entire community of residents – men, women, children – busy filling buckets full of water, and briskly distributing glasses of it to the thirsty and tired farmers on the tractors and on foot. Two of them told us, “We fully support the farmers, what they are doing is excellent.

One man who keeps a small shop at Khampur offered us water and was eager to comment. “I educated my son with so much effort and at so much expense, all in vain. There are no jobs for him. He is a property dealer and the property market is in a crisis. This Modi speaks of good days, but we got nothing. Only Adani and Ambani seem to be getting everything. This is why the farmers are fighting.”

At Khampur, Sanjay and I hitched a ride with a trolley that was part of the parade. A young man walking alongside the trolley saw me struggle to get up into it, and lifted me up by my armpits into the trolley! Inside, we met an entire family including several women, that runs a cosmetics shop in Chandigarh, that had come down to Singhu for the movement and the parade. The view from the trolley was breathtaking – an ocean of tractors, in orderly lines, for as far as the eye could see. There seemed to be no end to the procession.

Finally, as we began to get reports from Arun about the police repression at ITO and other places, we realised that the whole parade had come to a halt – clearly because the police, using the ITO incident as a pretext, had stopped it from moving past Mukarba Chowk on its route forward. Realising this, we hopped off the truck and found that we were on the Sanjay Gandhi Transport Nagar flyover, and below us was Libaspur village. We had no choice but to make our way down the embankment, using bushes and trees for support, to the road below. There, we made our way back to our office in Shakarpur in fits and starts, with several missteps along the way, because the Government had shut down most metro routes as well as the internet, and the traffic jam caused by the police bringing the farmers’ parade to a standstill, meant that travel in Delhi had become exceedingly complicated.

The good part was that throughout our return journey, every Delhi resident we met – mostly auto and e-rickshaw drivers and passengers from various classes and sections of society – was sympathetic to the farmers and highly critical of the Modi Government and the police.

One gentleman in an auto criticised the Government at length, “How is it that this government, which was elected with so much goodwill six years ago, seems to manage to create a major upheaval and chaos every year, with demonetisation, lockdown, CAA and now the farm laws? Don’t we have enough trouble with China at our borders, that the government should be making enemies of its citizens? Last winter, there was the agitation against CAA, this winter farmers are protesting for the past two months. If so many people are opposed to some law, surely any government with sense would gracefully withdraw it? The problem with Modi is, he is too arrogant. He thinks he is a king who will lose face if he bends. Look at these farmers, they have not harmed a hair on the head of even a single resident in Delhi, even though they are so many in number.”

An auto driver said, “Farmers already earn so little and have to worry every season about their survival. Now the government is trying to take away even what little they earn. You know the problem with this government? It brands every critic ‘anti-national’. How can it be that the government is always right, and everyone who questions it is a traitor to be arrested and jailed?”

One girl in an e-rickshaw at Libaspur said, “I heard that the farmers beat up a police officer.” When we told her that in fact, a farmer had died in the midst of police repression, she looked up at the long line of tractors on the flyover and replied, “Well, they look peaceful here. If the police beat them up and kill them, is it any surprise that some of them will hit back?”

Not a single person we met complained of the inconvenience they were facing as a result of the farmers’ parade – instead all of them looked sympathetically at the stranded farmers and expressed concern for them.

With Republic Day, the farmers have crossed another milestone in their courageous and historic movement. We must stand with their struggle which will end only when the three farm laws are repealed. 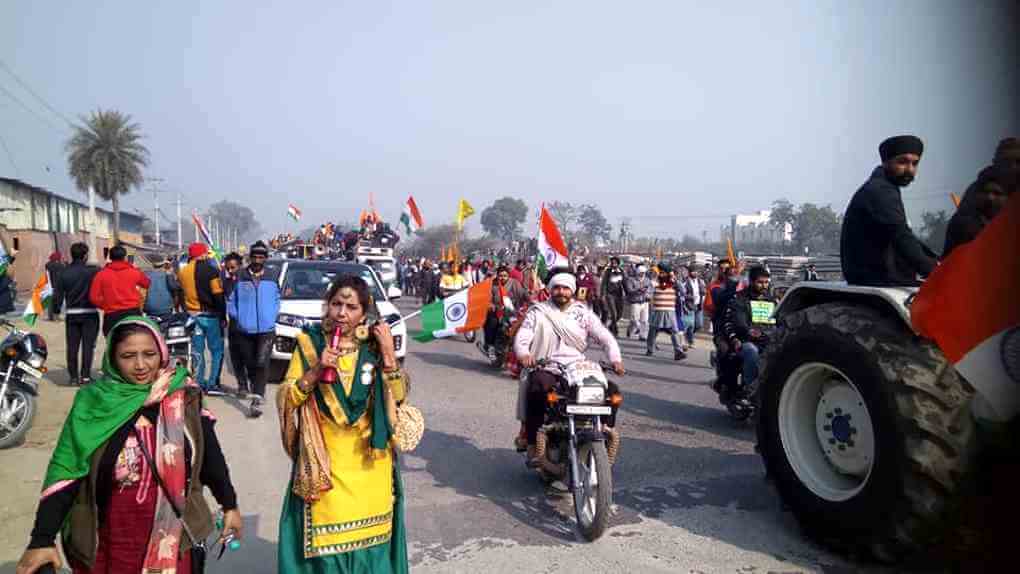