The Resonance of Netaji Subhas Chandra Bose in Today's India 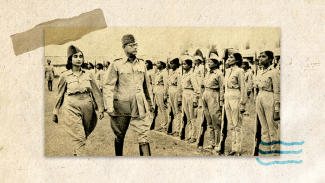 23 January 2021 marks the 125th birthday of Netaji Subhas Chandra Bose. As we celebrate this historic occasion, it is time we went back to the core vision and legacy of this great hero of India's freedom movement.

The Modi government has christened Netaji's birthday as Parakram Diwas or the Day of Valour. Just as Gandhi has been sought to be reduced to the idea of Swachhata or cleanliness, Bose is now being identified with the idea of Parakram or valour. In other words, while Gandhi becomes a saint preaching cleanliness, Bose is accommodated as a military icon in the iconography of the Sangh-BJP establishment. This is a clever ploy to appropriate these great icons of India's anti-colonial national awakening, while keeping the people oblivious of how these leaders had fought all their lives against the disastrous communal politics that the Sangh-BJP establishment is today inflicting on India from the citadels of power.

The Azad Hind Fauj phase was of course the most eventful and decisive phase in Bose's political life, but before that he had already emerged as one of the tallest leaders of the Indian National Congress, widely recognised as the leader of the Left wing within the Congress, who twice went on to be elected the party's president. As the President of the 1938 Haripura Session of the Congress, he formed the Indian Planning Committee and appointed Jawaharlal Nehru as its chairman. Eventually, as he had to part ways with Gandhi and quit the Congress, he formed the Forward Bloc as an independent socialist party with an uncompromising call for complete independence and clear vision of a secular socialist India.

In all his political writings and speeches, Subhas Chandra Bose emphasised the composite culture of India, identifying the Mughal period as a golden period in India's history and crediting it with the rise of much of the cultural synthesis and civilisational mosaic inherited by modern India. He was a great champion of the struggles of peasants and workers for their basic rights and dignity and considered them as important pillars of India's anti-colonial national awakening. At the same time, he was keenly aware of the divisive potential of communal politics. Even as the Hindu Mahasabha was trying to spread its network in undivided Bengal, Bose came down hard against this mixing of religion with politics and called upon the people to reject it and banish these practitioners of communalism from the political arena.

With the advent of the Second World War, Bose thought the time was ripe for a final push for freedom. While the majority of India's communists went to the extreme of ignoring the national context of India's freedom movement in responding to the international call for defeating the fascist alliance of Germany, Italy and Japan, Bose went to the other extreme of joining hands with the Rome-Berlin-Tokyo Axis to achieve a military ouster of India's British rulers. It is an irony that an ardent socialist like Bose who had categorically denounced the rise of fascism in Italy and Spain and wanted to build free India on a strong socialist foundation eventually sought the help of the fascist alliance to achieve military victory over British colonialism.

The Azad Hind Fauj experiment and expedition must not however be seen only as a tragic phase of Indian history which ended in defeat and mystery. It had its elements and moments of glory. The formation of a government in exile, Arzi Hakumat-e-Azad Hind or the Provisional Government of Free India and the building of an Indian National Army (INA) by bringing together Indian prisoners of war and expatriates from South East Asia, with brigades named after Gandhi, Nehru, Maulana Azad, Rani of Jhansi, and Bose himself, signified a totally new level of determination and maturity in India's battle for independence. The way the INA experiment drew on the rich legacy of 1857 with the motto of Ittehad, Itmad and Qurbani (unity, faith and sacrifice), including also Sikhs (who had not been part of the 1857 uprising) and forming a full regiment of women under the leadership of Captain Lakshmi Swaminathan (Sahgal) named after the Rani of Jhansi, upheld the spirit and vision of a united India with an explicit recognition of India's composite past and present. Even after the military defeat of the INA expedition, the call for the release of INA prisoners resonated through India and together with the revolt of the Royal Indian Navy in Bombay, created a decisive backdrop for the end of British rule in the immediate aftermath of the Second World War.

In 1857 India's freedom fighters, comprising soldiers (who were peasants in uniform), peasants and citizens, had reached Delhi but could not hold on for long. Netaji tried to pick up the thread, paying tribute to the memories of Bahadur Shah Zafar in Rangoon. ‘Delhi Chalo’ was Netaji's final battle cry. Today as India remembers the legacy of Netaji Subhas Chandra Bose and braces itself for the 71st anniversary of the foundation of the Indian Republic, India's farmers are shouting the same slogan as they march on the borders of Delhi, demanding freedom from Adani-Ambani-Company Raj and complete repeal of the Modi government's disastrous anti-farmer farm laws. This is the living legacy of Netaji Subhas Chandra Bose and India's freedom movement, and it will resist today's corporate aggression and communal fascist offensive as uncompromisingly as Bose had fought for freedom from British colonial rule.