We the People of Patna Stand with Farmers 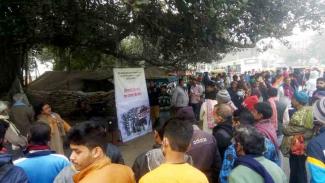 22 January was the 4th day of the 'We the People of Patna with Farmers' campaign organized under the banner if AIPF Patna. A orogram in support of the ongoing farmers' struggle against the 3 black farm laws was held at the Kankarbagh Sabji Mandi in Patna attended by a large number of members of civil society.

All India Kisan Mahasabha National Vice President Shiv Sagar Sharma said that if farmers provide food for the 135 crore population of the country, they also know how to deal with those who want to steal the food from the mouths of the people. He appealed to all people to stand with farmers against the loot of Adani-Ambani Raj.

Senior CPIML and AIKM leader KD Yadav said that the martyrdom of 147 farmers on the Delhi borders will not go waste and the Modi government will have to repeal these black laws.

AISA leader Priyanka Priyadarshini recited a ghazal written by Dushyant and poet Sanjay Kumar Kundan recited his poetry about the certain downfall of this tyrannical government.

AIPF leader Ghalib, conducting the program, said that the campaign We the People of Patna with Farmers will hold programs at various places till 26 January to make people aware of their responsibility to stand with the farmers in this just and historic struggle.

The indefinite dharna in support of the ongoing farmers' movement that started on 7 January at Gardanibagh in Patna concluded on 15 January with the call to make the human chain called by the Mahagathbandhan to be organized on 30 January a resounding and historic success. Kisan dharnas there were going on across Bihar also concluded on 15 January with the resolve to continue the farmers' struggle.

Addressing the dharna at its conclusion CPIML Bihar State Secretary Kunal said that this struggle is no longer confined to farmers but has become a second freedom struggle of the people. Enslaved agriculture equals an enslaved country. These three black laws will destroy farming as well as the country's food security. He gave the example of Somalia and how corporate farming destroyed that country, pointing out that the BJP government wants to repeat that story in our country as well. He also gave the example of the Adani group cornering the apple market in Shimla, buying apples cheaply and earning fat profits by selling at Rs 100 per apple. The Modi government wants to serve such corporate houses through these new laws.

AIARLA General Secretary Dhirendra Jha said that the protesting farmers and people of India have no confidence in the stay order given by the Supreme Court on the implementation of the three black laws which farmers are demanding should be repealed. A CPIML team has just returned from the Singhu-Tikri borders where they spoke with the agitating  farmers. Farmers believe that a misconception is being sought to be spread through the Supreme Court but the farmers will never accept this. He also said that the farmers' parade in Delhi on 26 January is going to be historic.

AIKM National Vice President Shiv Sagar Sharma said that the people have now understood that Adani-Ambani Raj is being imposed in the country and we have to save our freedom and democracy. All the leaders said that the struggle would continue till the three black laws are repealed. They called upon all the people in the country to stand in support of farmers.

Through the dharna the call was given for saving farmers and farming, for protecting rations for the poor, for protecting democracy and making the farmers' parade in Delhi on 26 January and the human chain across Bihar on 30 January a historic success.