Hands Off Our Campus! Students Protest in Philippines 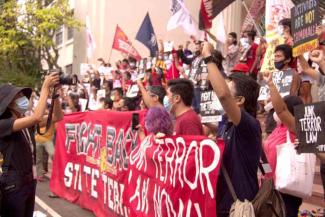 Massive students’ protests have erupted since 15 January at University of the Philippines (UP) campuses against fascist President Rodrigo Duterte government’s attempt of red-tagging (targeting leftist students and teachers) and trampling student activism. Carrying placards ‘Fight Back State Terror,’ hundreds of students and faculty members protested against the government’s decision to unilaterally terminate the 1989 agreement with the UP that prohibited entry of police and military into UP campuses without the permission of university authorities.

The 112-year-old university has long had a long history of being a bastion of student activism and progressive politics. Under Duterte, who had been organising terror campaigns against progressive, leftist and dissenting voices, the UP campus had been in the forefront in resisting the fascist regime. And the new move by the government is seen as an expansion of red-tagging campaign by targeting UP, which played a historic role in the fight against the United States backed dictatorship of Ferdinand Marcos in the 1970s and 80s. Hundreds of university students were abducted, tortured and killed by military forces during the Marcos dictatorship, which in 1986 was ousted by the people’s collective action.

In February 1971, the UP Diliman campus (in Quezon City, Philippines) students and teachers, along with transport workers rose in protest against oil price hikes, took over the campus and organized a “Diliman Commune” that resisted police and military attacks for eight days.

The 1989 agreement was signed to prevent military brutality against students and teachers witnessed during Marcos dictatorship era. The ruling Duterte government is following in the dirty footsteps of Marcos.

Unlike many other incidents of state repression on universities across the globe, the UP administration stood with the students and teachers in the protest. UP Diliman Vice Chancellor for Student Affairs Louise Jashil R. Sonido said “To all those who continue to doubt and underestimate our youth, enough. Because the kids are all right. They are here and unafraid. They will stand their ground on the right side of history, and they will be remembered for their strength and vigilance, for their relentless service to the people despite red-tagging, despite political persecution, despite big bullies in government picking on them and pointing their guns at them. Our weapon is our criticism, our insolence, our daring, our defiance. History will remember that in the line of fire, UP stood its ground and it will not back down. We will defend the University.”

Duterte’s ‘War on Drugs’ and ‘War on Terror’ has witnessed horrific crimes, including extrajudicial killings and enforced disappearances. Since 2017, many people from poor backgrounds were summarily executed as drug peddlers and state machinery was given a free hand by Duterte to target union leaders, environmentalists,  farmers, lawyers, students, indigenous peoples and journalists.