Arnabgate and India’s Battle against the Goebbelsian Godi Media Propaganda 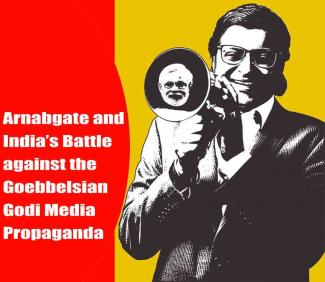 Arnab Goswami, the vitriolic face of India’s notorious ‘Godi Media’ – a school of media that operates not just on behalf of the state against the interests of democracy but acts as the stormtroopers of a propaganda war, colluding round the clock with fascist forces to spread hate and lies, distort facts and demonise dissent – has finally got a debilitating dose of his own medicine. For too long he has been holding media trials on behalf of the Modi-Shah establishment and the Sangh brigade using select leaks from mails and chats. He would not have perhaps bargained for the moment when WhatsApp chats would prove such a leveller for him and expose his identity as a thoroughly unscrupulous power broker in the garb of a self-righteous journalist.

The law has of course begun to catch up with Arnab Goswami in recent times. He was arrested by Maharashtra police in November 2020 as a key accused in a 2018 suicide abetment case. Interior designer Anvay Naik and his mother who had committed suicide in May 2018 had accused Arnab Goswami and Republic TV of driving them to commit suicide by not paying Naik his dues worth Rs 5.40 crore. The Supreme Court of India which has of late been denying bail petitions filed by journalists, writers, lawyers and human rights activists, all victims of trumped up charges and draconian laws, by contrast rushed to the rescue of Arnab Goswami to grant him bail.

While Republic TV gets away with its routine peddling of hate and lies in India, its Hindi channel Republic Bharat was fined last December by Ofcom, the British TV regulatory authority, for “hate speech against Pakistani people, and derogatory and abusive treatment of Pakistani people”. But here in India, we now know how Arnab’s Republic TV has been the beneficiary of systematic collusion with India’s TV rating agency Broadcast Audience Research Council (BARC). Former BARC CEO Partho Dasgupta is already in jail in connection with what has now come to be known as the TRP (Television Rating Points) scam, and with the submission of the supplementary chargesheet by the Mumbai Police containing 500 pages of Whatsapp conversation between Arnab Goswami and Partho Dasgupta between 2017 and 2019, we now have explosive details about the functioning of Republic TV.

The Arnab chats tell us not only about the collusive nexus between  Republic TV  and the BARC and the tampering with India’s TRP data to the business advantage of  Republic TV, they give us an anatomical picture of the propaganda war that the Modi-Shah establishment has been waging with Arnab Goswami as a key manager of this  war. Viewed only economically, the TRP scam may look like nothing more than a media equivalent of India’s notorious share market scams or banking frauds based on systematic manipulation of ‘insider information’. But it assumes a totally different dimension when we realise that this ‘insider information’ pertains to military and political planning at the highest level of the executive, when we hear Arnab Goswami mention the Pulwama tragedy as a ‘war we have won like crazy’ or when we realise that Arnab Goswami has prior intimation of official secrets like the Balakot air strike or the abrogation of Article 370! It is all the more disturbing to realise that the National Investigative Agency (NIA) is currently busy targeting leaders of the farmers’ struggle – while ignoring the evidence in Arnab’s chats of what is clearly a breach of national security.

The world has just heaved a collective sigh of relief over the failure of the Trump coup in America. Major parts of the American media played a key role in securing America’s escape from the trauma of a second term of Trump’s tyranny. The Arnab chats tell us how India fares in contrast, how the Pulwamas and Balakots are unscrupulously used by the combination of the Goebbelsian Godi Media and the Hitlerite Modi Regime to manufacture and manipulate public opinion. At the same moment Modi was shamelessly asking for votes in the name of Pulwama martyrs, Arnab was unscrupulously using their deaths to increase viewership and further consolidate his channel as a Sanghi propaganda machine. The battle for democracy in India will have to be advanced by challenging this collusion between the dominant sections of the media, especially television, and the ruling political establishment.

The Arnab chats are way more explosive and ominous than the infamous Radia tapes of the UPA era. The Radia tape were about journalists and corporate lobbyists trying to influence ministerial appointments and policies, the Arnab chats are about the transformation of the media into a tool of corporate aggression and fascist propaganda war. It is reassuring that the ongoing farmers’ movement against the Modi government’s disastrous farm laws has identified the Godi media as a key adversary along with the Adani-Ambani company raj and the dictatorial Modi government. Regardless of the legal trajectory of the TRP scam, the Arnab chats must be used as key ammunition in advancing this battle for truth, justice and democracy against the combined assault of corporate power, dictatorial government and an aggressively partisan media establishment.

Here are the highlights of the chats between Arnab and BARC Chief Partho Dasgupta.

BARC Chief Partho Dasgupta speaks of “unofficial collaboration” between the ratings agency and Republic TV, advises Arnab on how to boost ratings.

BARC Chief warns Arnab that some decisions are being taken which will “hurt” Republic, and discuss how to prevent such decisions from being taken.

They discuss how to harm other channels.

BARC internal documents, email evidence shows rigging of ratings. Two BARC officials exchange mails saying that a particular set of data “can’t go out” because it would expose “which channels we are controlling and which we are not”.

BARC Chief asks Arnab to “get him a media advisor kind of position with the PMO”, and Arnab boasts of his influence within I&B Minister Venkaiah Naidu, saying Naidu will meet the BARC chief “one on one” so that he can make a personal presentation, and also says that Minister of State for I&B, Rajyavardhan Rathore, has “set aside” a complaint about Republic.

BARC Chief tells Arnab how to brief I&B Minister Smriti Irani, and tell her to “whack” rival networks to warn them not to trouble Republic.

Arnab boasts of setting up a meeting with the PM Modi. The BARC Chief reminds Arnab that he has supported Republic and “jammed” other channels, and in return asks Arnab to “help him through the PMO”, and Arnab promises to take up the BARC Chief’s concerns during a meeting with PM Modi.

BARC Chief and Arnab discuss how “AS” will rein in the TRAI and make sure that TRAI does not pursue its investigations of various illegalities by BARC. BARC Chief asks Arnab, “Can you help me by telling AS to tell TRAI to pipe down on BARC?”, to which Arnab replies “I can.” The BARC Chief continues, “Can you text AS and get TRAI rapped?”, to which Arnab replies “Can you give me three points why TRAI action is working against AS interest?”

Arnab also hints at prior knowledge of the Balakot strike – information that is supposed to be only with top political and military leadership alone - and the abrogation of Article 370.

So – what picture emerges from these chats?

Arnab gets “inside” help from the ratings agency to rig ratings, harm rival channels, and gets advance tip-offs about policy changes that may hit Republic’s interests. In exchange, he peddles his influence with the Prime Minister, the PMO, various I&B Ministers, and “AS” (the identity of whom is not difficult to guess). Why does he have such influence with the PM, “AS” and the Modi Cabinet? Clearly, because he helps them construct a political narrative favourable to them. That is why they give him advance knowledge of political and even military decisions – because these decisions are being taken to help the PM’s political image, which Arnab and the Republic will help shape. The Republic is no news channel which will take an impartial look at policies and decisions – it is a propaganda tool, literally embedded in the Modi PMO.

Such corruption is dangerous for democracy and national security alike.