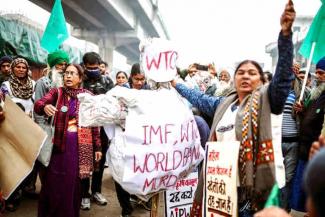 How is it possible that after the world attained an overall surplus in food production in most of the food-producing countries, worldwide hunger and malnutrition have also increased to a much greater extent? The answer lies in the logic of capitalism, which is the logic of greed and profit.

The farmers’ movement going on in India is a revolt against the Modi government’s deceitful, greedy and profiteering designs of surrendering country’s food sovereignty into the hands of few big capitalists (symbolised here in India’s leading capitalists Adani and Ambani) under the imperialist diktats of the WTO.

The implementation of these three farm laws will be the last nail in the coffin of public welfare policies, completing a process that began in late 1980s in USA under the garb of Uruguay round of GATT negotiations and in India in 1991 with the diktats of IMF and World Bank given to the Narasimha Rao Government.

It is no surprise that the International Monetary Fund (IMF) has come out openly in support of the three farm laws. Ironically the Modi regime which yelled “foreign interference” when the Canadian PM Trudeau expressed concern about the Government’s repression of farmers at Delhi’s borders, is perfectly happy with the “foreign interference” of the IMF!

The World Bank submitted a long memorandum  to India in 1991 demanding immediate restructuring of the economy and warning that without such measures India would be deprived of international financial assistance - mainly IMF loans. The major part of that structural readjustment programme proposed through that memorandum has already been implemented in bits and pieces by different governments, and what remains would now be completed if the three farm laws are implemented.

The World Bank recommended that:

The World Bank recommendations were immediately accepted by the Government of India in spite of wide opposition by left parties and many farmers’ organisations. In the budget of the same year, 1991-92, fertilizer costs were raised by 30%, export subsidies were abolished and subsidy on sugar was also eliminated. During the course of three decades most of those WB diktats have been fulfilled by the successive UPA and NDA governments.

The three farm laws forced through without a proper vote division in the upper house of Parliament are meant to accomplish what few of the WB diktats remain. The current farmers’ movement has now posed the most formidable resistance yet against the virtual parliamentary consensus in support of the imperialist package. This is why the farm law proponents complain of “too much democracy.”

The WTO Agreement on Agriculture  signed in 1995 echoed the same World Bank package in a more binding form for nations. Now it became mandatory for the developing countries to be “committed to achieving specific binding commitments” to “establish a fair and market-oriented agricultural trading system” by “regressive reductions in agricultural support and protection”. This was done in the name of “correcting and preventing restrictions and distortions in world agricultural markets” which is nothing but another name for lifting the system of subsidies and support to the peasants of poor nations to give a free hand to the rich countries to dump their agricultural surplus in the markets of developing countries. A new form of colonialism.

The AoA restricts member nations from providing support to domestic agricultural producers; restricts export subsidies; reduces import tariffs; and restricts public stockholding for food security which in the case of India amounts to doing away with the Food Corporation of India (FCI) and the government’s procurement of food grains for the purpose of ensuring food security to the deprived citizens and communities. This agreement imposed a system of crop insurance to be run by private companies instead of measures to develop and improve basic agriculture infrastructure. The three farm laws now fulfil the commitments made by India to WTO under the AoA.

There was a time when scarce food production was a primary concern particularly during the first half of the twentieth century. That was also a period of imperialist aggression and realignment surrounding two world wars. Food production worldwide increased considerably with technological advancements in latter half of the century. A system of subsidies and support to farmers and to develop agricultural infrastructure was also evolved by the nations as a natural corollary to ensure sufficient food supply.

India strived for its own food security after Independence, adopting land reforms and developing  agriculture infrastructure to do so. The agenda for land reforms was never completed, which remain till today the biggest blockade towards rural development. The productive forces could not be unleashed keeping agriculture shackled by feudal remnants. Some states including Punjab, Haryana and parts of Western UP fared better in land reforms. These areas became the sites of the “Green Revolution” (capitalist development in agriculture) in later years.

The “Green Revolution” & the Path Not Taken

India has an immensely rich and vast diversity in agriculture, in terms of crops as well as climate. Agriculture here has evolved into various different regional traditions, cultures and techniques. The introduction of High Yielding Varieties (HYVs) as the basis of Green Revolution by importing technology from the USA was not the sole option before scientific community during the Sixties. Our political establishment, bureaucracy and a section of agricultural scientists favoured imported Green Revolution technology. This involved import and development of HYV seeds which also required large quantities of pesticides, fertilizers, irrigation and other inputs because they were not adapted to Indian environmental conditions as were the indigenous varieties. Therefore, this technology import in turn increased input costs in agriculture production and also paved the way for the dominance of big corporations in this sector.

The then Director and world renowned rice scientist of Central Rice Research Institute Dr. RH Richharia at that time stood up in opposition to the Indian scientific establishment risking his own career. He gave a model to identify and develop high yielding seeds from India’s own vast diversified varieties because they are resistant to diseases, pests, drought and need less chemical fertilizers etc. This would not only have kept the input costs at much lower levels, it would have prevented health consequences like the cancer epidemic in Punjab that is the result of pesticides in the groundwater.

Dr Richharia made a gene bank of naturally occurring varieties of rice from Chhattisgarh (then in Madhya Pradesh) which were in no way less high-yielding than the imported ones and did not require huge input of fertilizers and other inputs. Let us argue what would have been the agrarian scene today had Dr. Richharia’s model of agricultural development been adopted at that time in place of what we today call the “Green Revolution”? Today we are experiencing huge environmental degradation, water crisis, farmers’ indebtedness and suicides on the one hand and an overwhelming dominance of big corporations over the lives and livelihood of rural population as an ultimate fall out of the Green Revolution.

Dr. Richharia in the 1960s had challenged the fundamental approach of the Green Revolution. In early 1980s he described this in his plan for increasing production of rice submitted to the PMO on latter's request saying, "The main constraint has been the hurried introduction of the undesirable new rice material, the HYVs (dwarfs) on which we based our strategy, replacing even the reputed high yielding rices of the lacality, forgetting at the same time unexpected drought situation, under the HYVs lowered the yields.... HYVs proved susceptible to diseases and pests which cannot be controlled easily, thus against pointing towards reduction of yield ."

Dr. Richharia’s story is lost in oblivion thanks to political establishment which apparently favoured US designs ignoring India’s ground realities. He was isolated and victimised to the extent that he had to unsuccessfully fight a long legal struggle to keep his job and designation as well as his scientific accomplishments. Today we talk of importance of organic farming and organic food, and we have a chance to review our entire approach towards India’s model for scientific and technological innovations in agriculture and rural economy.

Indian agriculture is facing stagnation since decades. Neo-liberal restructuring and WTO diktats  have made the situation even worse. The same WB memorandum of 1991 also said that “limits to growth from Green Revolution technologies are approached, there are no new technologies on the horizon.” In place of reviewing and correcting the inherent weaknesses of the Green Revolution, now there are talks of “Green Revolution II” which is nothing but the going further ahead with the same policy regime to introduce bigger penetration of imperialist capital which in turn makes farmers more alienated from their own lands and from agriculture as a profession. This scheme is unacceptable to Indian farmers.

Land reforms were required most to unleash the potential of agrarian development. This unfinished agenda is now a thing of the past and whatever land reforms were achieved are now being reversed. The policy of land acquisitions, and policy rhetoric of land consolidation in the name of making agriculture viable is nothing but a disguise for alienating small and marginal farmers from their lands. The three new farm laws are meant to do this job more speedily.

There has always been a demand by farmers for increased expenditure in agriculture infrastructure and development of roads, storage capacity, irrigation, electricity in order to develop the rural economic base and the country’s food sovereignty. These are demands which were never considered by the State seriously. Now preparations are on to hand over the whole business of agricultural infrastructure to the private sector on a platter.

Subsidies are not doles or freebies as alleged by the ruling class parties, especially by the ideologues and apologists of the Modi regime today. On the contrary they are an essential way of allocating the state’s resources to the most deserving sector in order to strengthen the country’s socio-economic development. Marketing with proper remuneration is common sense. Every nation has a right to evolve and develop its own mechanism. We need not to go for abolishing APMCs or similar mechanisms to give a free hand to monopoly capitalists, instead one should go for accepting the farmer organisations’ long pending demands for improvement in those mechanisms as well as a good and viable credit system the absence of which has made thousands of farmers to commit suicides.

Indian farmers today produce more than enough food to feed each and every citizen comfortably. Sadly, not all Indians are well nourished and well fed because the food produced by farmers is not accessible to them owing to rising economic inequality manifested in rising poverty levels. This phenomenon has become more acute under Modi-rule. We need to secure our food sovereignty by rejecting the policy framework which will further endanger our farmers, and we also need to create suitable conditions so that food reached to all as their fundamental right. Government’s dilution of National Food Security Act, decreased funding of MNREGA, declined budgetary allocation to the FCI, etc should not be seen as unconnected events. These are part of the same scheme which today is being opposed by massive farmers’ movement.

Developed nations want their surplus food-grains to be dumped in Indian and other developing nations’ markets through WTO route. In these times our government is being ‘governed’ by the WTO rules and imperialist diktats which must be opposed by supporting the ongoing movements of farmers, workers, and other sections of toiling masses who are directly resisting WTO’s adverse impacts on Indian people. These three farm laws are integral to the US designs of forcing Indian farmers to shun traditional crops, mainly food grains, in the name of diversifying towards more
‘commercial’ crops like raising corn for ethanol production. This is a direct attack on our food sovereignty and independence – and we all need to support the farmers at the frontlines of resisting this attack.