A Victory for Women’s Movement in Argentina 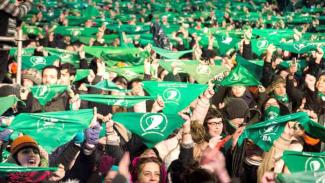 An Update on People’s Struggles And Victories Around the World

On December 30, the Argentinian Senate voted to pass a bill that will legalise abortion in the country, marking a historic victory for country’s feminist movement that has been organising for the past 15 years for the legalization of abortion.  The bill, known as  the Voluntary Termination of Pregnancy (IVE),  legalises terminations in the first 14 weeks of pregnancy was passed with 38 votes in favour, 29 against and 1 abstention.

The legalisation of right to abortion sent out a wave of joy across Argentina, with tens of thousands of feminist activists gathering at the Argentine Congress with symbolic green bandanna/scarf. The green scarf, which became the symbol of women’s movement for liberation and rights was an allusion to the Mothers of Plaza De Mayo who wore white headscarves and fought against the disappearance of their children by the brutal dictatorship backed by the United States in Argentina in the 1980s.

In Argentina, abortion was penalised based on the 1921 regulation that criminalised the right to abortion with certain exceptions. The abortion ban led to women, especially from poor and disadvantaged communities forced to opt for clandestine and unsafe abortions out of fear of repercussions from the state authorities and the right wing anti-abortion groups.

The watershed movement in the campaign for right to abortion came in 2015 when mass protests swept across Argentina against the, brutal murder of 14 year old Chiara Paez, who was few months pregnant. The protests mobilised with the call - #NiUnaMenos (Not One Less) - no more women lost to gender violence. Demanding an end to all forms of gender violence, the movement also strengthened the fight for the right to abortion, LGBTQI rights and all social struggles.

The earlier attempt to legalise abortion was blocked by far-right wing Maurico Macri led senate in 2018, which rejected a similar bill. Despite massive vilification campaign and opposition from right wing anti-abortion groups in the country, the feminist movement constantly mobilised for their rights.

With the rejection of the Macri government in the 2019 elections and victory of the Frente de Todos coalition led by Alberto Fernández and Cristina Kirchner, the right to abortion struggle gained further momentum and ultimate victory on December 30 2020.

This decisive victory for the feminist movement in the long and hard fought struggle for right to abortion in Argentina is an inspiration for similar movements across the world.