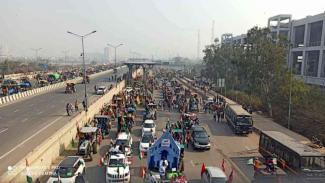 The journey of independent India as a modern democratic republic began on 26 January 1950 when the Constitution of India came into force, the Constitution adopted by 'we, the people of India' resolving to constitute India into a sovereign democratic republic and secure to all its citizens comprehensive justice, liberty, equality and fraternity. The 71st anniversary of India's Republic Day saw India's farmers and other common citizens rekindle that republican spirit of India's Constitution in an unprecedented display of people's unity, determination and power.

Incidentally, the current phase of the farmers' movement demanding repeal of the disastrous farm laws began on 26 November, the day of adoption of India's Constitution. While the government of the day betrayed the spirit and vision of the Constitution to promote corporate interests as farm laws, the determined resistance of the farmers to this fascist corporate assault has created a countrywide people's platform to defend the interests and rights of not just India's farmers and other sections of agricultural population but all Indians fighting for justice and democracy. Between 26 November, 2020 and 26 January, 2021 while the Modi regime, Indian state and the Sangh-BJP brigade tried every possible trick to isolate, confuse, divide and discredit the protesting farmers, the movement has gone from strength to strength, arousing tremendous hope and goodwill and unleashing massive energy and determination all around.

The farmers' movement has shown enough patience, maturity and power to brave a cruel winter and deal with the multi-pronged strategy of the government. Frustrating all attempts of the government to bring the movement to an end before the Republic Day, the protesting farmers took their movement to a new high. Having failed to crush the movement by force or outwit the farmers though deceit, the Modi government is now trying to delegitimise the movement by with a distorted and misleading account of Republic Day events in Delhi, accusing farmers of indulging in anarchy and insulting national symbols and monuments.

Nothing could be a bigger and more brazen lie. While waiting for more details to emerge on the clashes between protesters and the police in parts of Delhi and the visual of some people hoisting the Nishan Sahib in the Lal Qila complex, two facts stand out as clear as daylight. It is the farmers who lost at least one life in the course of the day's events and they mourned this loss without getting provoked. It should also be noted that in the Lal Qila incident, the flag in question was hoisted on an empty flagpole without showing any disrespect to the tricolour. In fact, as in most recent examples of popular struggles since the anti-rape and anti-corruption struggles during the last years of the second term of the UPA government, the tricolour has been the most prominent flag of the ongoing farmers' movement along with red and green flags of farmers' organisations.

The ongoing farmers' movement has emerged as one of the biggest in India's history in terms of vibrant participation, fighting spirit and creative energies of the protesting people. In the last decade, Delhi has witnessed several instances of sustained popular assertion. The anti-rape and anti-corruption struggles played a big role in bringing about a change of governments, with the AAP replacing the Congress government in Delhi and Modi-led NDA replacing the UPA government at the Centre. These struggles too had their shares of confrontation between the protesters and the police or scenes of chaos and disorder. But these struggles were never sought to be dismissed as anarchist or anti-national exercises by the media and the governments of the time.

The culture of discrediting and demonising popular democratic protests as anti-national acts of anarchy is a distinct post-2014 trend. We've seen the Modi government try and do that to suppress the student movement triggered by the institutional murder of Rohith Vemula. We saw it again last year in the wake of the equal citizenship movement initiated by the students of Jamia and the protesting women of Shaheen Bagh. The attempt to intimidate and discredit the Shaheen Bagh protesters even took the form of a campaign of organised anti-Muslim violence followed by persecution of protesters by arresting them under draconian laws. The government wants the world to believe that the Shaheen Bagh movement was a conspiracy to carry out a communal riot!

The same pattern is at work following the Republic Day events in Delhi. A vicious and concerted disinformation campaign is underway to discredit the movement in popular perception. The farmers' movement which has remained remarkably focused and united till date will surely be able to overcome this challenge. The farmers' movement has every potential to secure a complete repeal of the disastrous farm laws. All forces of anti-corporate anti-fascist resistance must stand firm with the farmers in this great battle. More power to the fighting farmers, more power to people's protests!