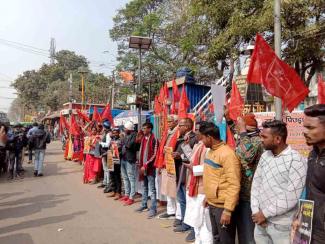 At Mahendra Singh’s ancestral village Khambhra, his bust was garlanded and the whole village gathered to pledge their support for the farmers’ movement. At Bagodar, Comrade Mahendra Singh’s statue at the CPIML office was garlanded by Bihar and Jharkhand MLAs, and senior CPIML leaders, followed by the human chain against the farm laws, in which women and men from Bagodar, Sariya, Birni, Rajdhanwar, Jamua and other blocks and small towns participated in large numbers, raising slogans against the Modi-Shah tyranny and in support of the farmers’ movement.

Addressing the memorial meeting, State Secretary Kunal said that Mahendra Singh was a people's leader and the epitome of a true people's representative. Fearful of his popularity, BJP-protected criminals brutally murdered him on this day in 2005. His voice was the fearless voice of the revolutionary opposition inside the Assembly. He made the voice of the poor, the oppressed and the  marginalized everywhere, from the Assembly to the streets. He was an ideal people's representative, an inspiration for the Communist movement, and an intrepid warrior for the 'jal-jangal-jameen' rights of the people.