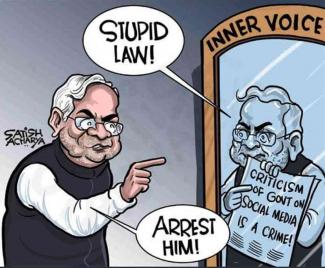 A gag order dated 21 January 2021 issued by the Bihar government declares that any individual or organisations that post criticism or comments against the Bihar government, or its Ministers, MPs, MLAs and government officials, on social media will be punished. It is difficult to imagine a more shameless and draconian attempt to gag criticism.

Recently, a video of the Chief Minister Nitish Kumar reacting angrily at being asked a question by a reporter, went viral. The CM’s reaction, and his subsequent gag order, reveals the fact that he knows that his government barely scraped by, through hook or crook, in the elections. But gagging social media will not make the criticism of the BJP-JDU regime go away!

This gag order is reminiscent of the notorious Press Bill 1982 of the Jagannath Mishra era, against which the journalistic community along with the people of Bihar launched a historic protest and forced the government to repeal the draconian law. This new order by the Nitish government is a similar draconian law and must go.