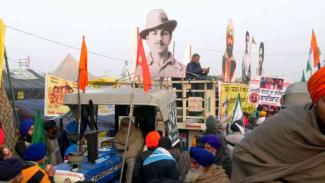 On Republic Day, the official parade had the usual display of military hardware, while the floats had an ominous tinge of Hindu supremacy. The Uttar Pradesh Government float displaying a model of the prospective Ram Temple at Ayodhya – which will take the place of the historic Babri Masjid, demolished by Hindu supremacists in the presence of the topmost BJP leaders who went on to profit politically for decades to come from this act of violence against Muslim minorities and the Constitution of India.

In contrast to this disquieting official spectacle, the people of Delhi had the historic opportunity to witness and participate what Republic Day is really about: the spirit of democracy in which We The People of India speak truth to power, rather than celebrate the state’s power over people. All along Delhi’s Outer Ring Road, for kilometres at a stretch as far as the eye could see, farmers from all over India were on the streets on tractors and trolleys that had been decorated as floats with sugarcane shoots and leaves, flowers, and flags. The Tractor Parade in fact continued all night right up to the morning of 27 January, when the huge number of tractors could finally make their way back to the protest sites at the borders of Delhi.

The electronic media, which spent the whole morning focusing its cameras on the official parade, failing to show any meaningful coverage of the thousands of tractors and lakhs of farmers in a peaceful parade, chose to blow one small chapter of the 26 January farmers’ actions out of proportion. This was a chapter where some small contingents of farmers (from the processions that left the Gazipur, Tikri and Singhu borders) chose to follow the parade route along the inner ring road, which the joint platform of farmers’ unions had changed to minimise clashes with the police. In the first place, the Delhi Police (answerable directly to Home Minister Amit Shah) had no right to “deny permission” to the original route proposed by the farmers. In the second place, in a huge movement, not all farmers are bound by the decisions of the farm unions’ joint platform. Choosing an alternate route is not a crime, since the streets do not belong to the government but to the people, and protest by its very definition is not held at the mercy of “police permission”. It was obvious to all observers from the night before that some farmers were planning to take the original route, and the police had ample time to be prepared and should have simply made plans to cooperate with those farmers. The police, instead, unleashed brutal repression, beating up farmers with batons and using tear gas at various places including Akshardham and ITO. At ITO, this repression and the resulting chaos cost the life of a young farmer. In the confusion and panic that inevitably follows tear-gassing, a tractor lost control and turned turtle, and young Navreet Singh Hundal, a farmer from the Uttarakhand contingent which had been camped at Gazipur, lost his life on the spot. Navreet, whose village falls on the border between Uttarakhand and UP, had taken up farming after being deported from Australia for taking up a job while on a study visa. Hardeep who had been in the same truck as Navreet, alleges that the police had fired at them. Even if this is not true, it is likely that the farmers mistook the sound of tear gas shelling for gunfire. Defying attempts by the police to take Navdeep’s body into their custody, the farmers sat down at ITO to mourn Navdeep, draping his body of this martyred young farmer with the national tricolour, and several of them chanted prayers for him.

The Ambani-controlled and Modi-serving media, chose not to focus on this tragedy caused by the police repression, and the incredible restraint shown by the farmers in the face of the death of their brother. Instead it chose to focus its gaze exclusively on some younger protestors who, following the chaos at ITO, moved ahead to the Red Fort, where some of them scaled it and hung some of their flags (including a flag with a Sikh religious symbol on it) on some empty flagpoles, below the national tricolour. The media promptly began misreporting the parade, claiming that it had “gone out of control”, had “desecrated the national flag and a national monument”, and even that farmers had “raided” the national capital and “captured the Red Fort.” In fact, the incident at the Red Fort was at best a very understandable restlessness among the younger farmers following two months of patient protests in deadly cold, more than 150 deaths, and an adamant and arrogant government; and at worst, it was perhaps instigated by some agent provocateurs. But two fact shine out even in this episode. First, it is crystal clear that had the Delhi Police not opposed the original route proposed by the farmers unions’ platform, the Tractors’ Parade would have passed without the Red Fort incident and without any loss of life. Even if the Delhi Police had simply allowed the contingent that followed the original route, to do so without repression, these incidents would almost certainly not have taken place. Secondly, all the participants of the Tractor Parade, including at ITO and Red Fort, returned peacefully to their protest sites as had been previously decided. As several Delhi residents we spoke to in the course of the day said, the farmers, even after the death of one of their own and in the face of dire provocation by the police, had not raised a finger against any Delhi resident’s home or property. Even the “attacks on buses” that the media showed were merely the result of the fact that the Delhi Police had used the buses as barricades! Clearly the farmers had no intention to either “raid” Delhi or “capture” any monument.

We can clearly recall the 2012 anti-rape protests, when sections of young protestors had made their way into the Rashtrapati Bhawan and Parliament, and other areas “forbidden” by the police, and had faced repression by the police. The difference is that then, the UPA Government was in power, and the media, instead of being servile to the government and vilifying the movement, had rightly shown the perspective of the protestors.

Mirroring the Farmers’ Parade in Delhi, farmers and workers together held parades (including motorbike and tractor parades) in support of the farmers’ movement, at many cities and towns all over India including at Patna, Ranchi, Bagodar, Bangalore, Kolkata, and Bangalore.

Republic Day marks the occasion when “We The People of India” gave to ourselves a Constitution and set for ourselves a goal of democratic values to aim for as a society – goals we knew we fell short of, but goals for which we felt we had a potential. The farmers on the streets reminded the whole country that Republic Day is not a day for citizens to be mere spectators (watching a military parade on TV) but to be active participants. People are the heroes of the Republic, not mere “extras” in a televised script where the PM is the hero. 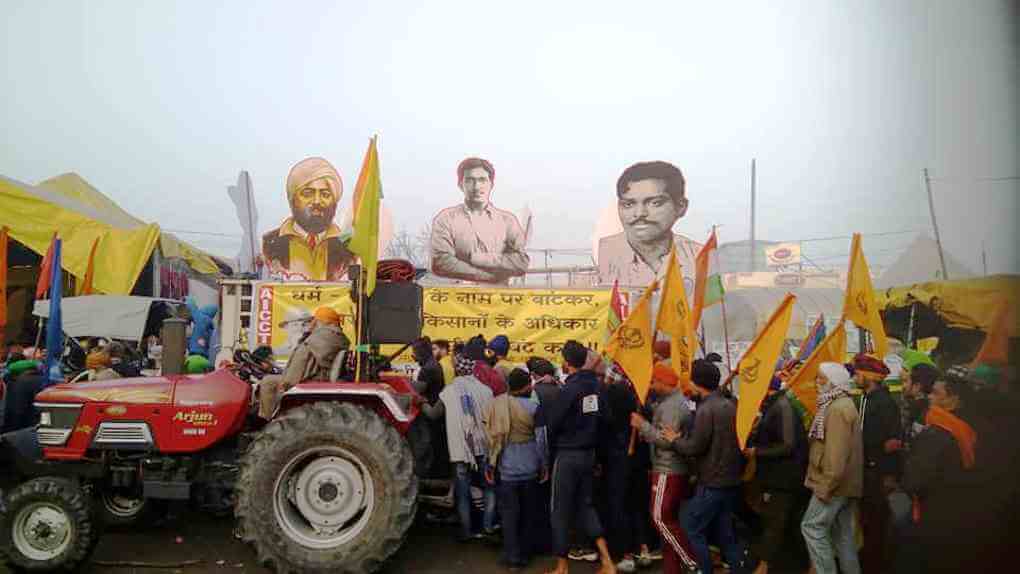