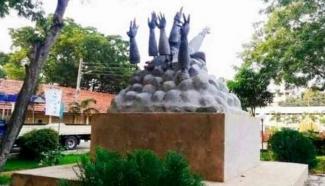 In the first week of January 2021, a memorial for Tamil martyrs in Jaffna University was demolished. The memorial had commemorated the tens of thousands of Tamils massacred in Mullivaikal in 2009, on the directions of the then President and current Prime Minister of Sri Lanka Mahinda Rajapaksa, during the final stages of the struggle for Tamil self-determination in Sri Lanka. While the University has now agreed to reconstruct the memorial following a hunger strike by the University students, the demolition itself is symptomatic of the Sinhala majoritarian triumphalism of the Sri Lanka government, since Gotabaya Rajapaksa and his brother the notorious Mahinda Rajapaksa were elected President and Prime Minister respectively in August 2020.

Justifying the demolition, the University Grants Commission (UGC) Chairperson Sampath Amaratunge said it was a threat to national unity. Branding a memorial to massacred Tamils as a threat to “unity” in Sinhala-majority Sri Lanka, reeks of majoritarianism and bigotry. In the same vein the Public Security Minister Sarath Weerasekera said that “no one will and should be allowed to commemorate dead terrorists.”

According to the Tamil Guardian which tweeted live video reports on the whole episode, journalists covering the demolition were assaulted by Sri Lankan police and plain clothes intelligence personnel. Sri Lankan Special Task Force troops blocked the Jaffna University campus gates and conducted motorbike patrols. Even in the face of this intimidation, Tamil students gathered to hold a sit-in protest against the destruction of the Mullivaikkal memorial, asking their Vice Chancellor to come out and agree to reinstate the memorial. One tweet summarised the situation in this manner, “While Tamils want to remember the dead the Sri Lankan government keeps reminding us who the killers are.”

Eventually, on the fourth day of the hunger strike by students, the VC met them and promised to reinstate the monument, following which the strike ended.

The demolition of the monument is a reminder that the Rajapaksa regime wishes to annihilate the very memories and histories of the Tamil people. Such attempts at the erasure of history are also a form of ongoing genocide.

The Sri Lankan President Gotabaya Rajapaksa appointed five members of his own family (including Mahinda Rajapaksa) to cabinet and ministerial roles, cementing a dynastic and tyrannical stronghold on the country.

Thousands of acres of land belonging to Tamils, that had been occupied by the military and that the government was supposed to return, remained under military occupation. The Rajapaksa regime has ignored the UN’s urging to return the land and rehabilitate the Tamils who had been forcibly evacuated or driven from the land.

In a constitutional coup, the Rajapaksa regime is dismantling the North East Provincial Council (set up after the Rajiv-Jayawardane Accord, that had held out some meagre powers of self-governance for the Tamil regions).

Women relatives of thousands of Tamil people who were “disappeared” by the military during the conflict, continue to search for their loved ones.