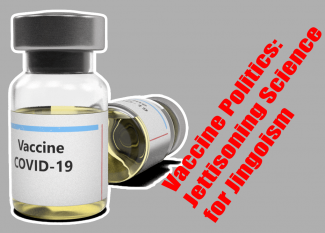 India launched its vaccination program against Covid-19 with much fanfare on 16 January. Unlike other countries which are using just one vaccine for their whole population, India has opted for two vaccines, Covishield and Covaxin. Citizens as of now do not have an option to choose from the two. Even though administration of vaccines to health care workers has already started there are serious questions over the process of approving the vaccines especially Covaxin including ethical issues and questions of accountability. Till now the two vaccines have been approved for ‘restricted emergency use’ (REU) by the Drug Controller General of India but the lack of transparency and the jettisoning of scientific parameters in the process of approval has established a dangerous precedent and will further undermine public trust of science.

Of the two vaccines in use in India, Covishield was developed by a team of researchers in Oxford University and the pharmaceutical company Astrazenca. The Serum Institute of India (SII) has got the license to manufacture it in India. The other vaccine Covaxin has been developed by Hyderabad based Bharat Biotech in collaboration with Indian Council of Medical Research (ICMR). For a vaccine to be approved it has to go through a set of trials to establish its efficacy and safety. If the vaccine has been developed in another country like Covishield there has to be a ‘Bridging Trial’ to demonstrate efficacy and safety in local conditions. The data from the trials are then submitted to the regulatory authority for approval, they are also made public along with the consent forms and the ethics approval granted to the trial. This is important so that members of the scientific community across the globe, not just those who sit in the regulatory authority can scrutinize and study the data; after all, being evaluated by peers is one of the pillars and norms of science.

In India the whole approval process granted to the vaccines has been shrouded in secrecy. The Subject Expert Committee (SEC) of the DGCI gave approval to Covaxin for REU even though Phase 3 bridging trials are still ongoing, but at least we have data from the UK where the same vaccine has completed all trials and has been found to have 70% efficacy against the virus. More alarming is the case of Covaxin which has been touted by the Modi Govt as the ‘Make In India’ vaccine and a flagbearer of ‘Atmanirbhar Bharat’. Between 30th December-2nd January the SEC first didn’t give approval to Covaxin and then did a complete 180 degree turn to grant approval without the vaccine even completing Phase 3 trials (any vaccine has to complete 3 phases of human trials before being approved for use). In fact, as this article is being written the Phase 3 trials for Covaxin have not yet started.

The SEC which comes under the ambit of the Ministry of Health has not yet given any reason for doing an overnight U-Turn to approve Covaxin. The SEC put out a statement saying Covaxin has been approved because it can be effective against the new strain of the Coronavirus recently discovered in the UK, but rigorous science demands that such a capability be demonstrated by the vaccine and ensuing data be made available for scrutiny. Approvals cannot be granted in the realm of the possibility for this would set the precedent for future vaccines to be approved on their ‘possible capabilities’ and not their ‘proven capabilities’.

Multiple instances of unethical practices have also been reported in the conduct of the trials by Bharat Biotech. Victims of the Bhopal Gas Tragedy were paid to take the shot without being informed about the vaccine. Subsequently no one has monitored them to observe the effects of the vaccine, in case adverse reactions emerge they will have to look after themselves. Astonishingly, the Health Ministry has refused to take responsibility for any adverse reactions and deaths arising out of vaccination!

Dr. Gagandeep Kang, one of the world’s leading virologist who has critical of the vaccine approval process pointed out that it is a worrying sign that not enough people in India were volunteering to be part of vaccine trials which point towards a hesitancy and doubt about the vaccines. This is an important observation because it is not just anti-vaxxers who distrust vaccines, today there are valid grounds to doubt the safety and efficacy of the Bharat Biotech Covaxin. When principles of science like transparency and peer review are not adhered to then it is only natural that citizens who trust science start doubting the vaccines. The historian and philosopher of science Naomi Oreskes has argued that one of the reasons for people trusting or not trusting science is their knowledge about the process of reaching a conclusion in science. If citizens know that the final product has gone through a rigorous process of scrutiny, trials and all the data is placed in the public domain citizens are more likely to trust a vaccine. Secrecy will lead to the death of trust in science. In the case of Covaxin and to an extent Covishield, the lack of transparency will not encourage people to trust the vaccine.

But the Govt’s jettisoning of scientific principles to approve the vaccines is not surprising. Since 2014 the Modi Govt has been anti-science. It has cut funding for research, promoted mythology and fake news in the name of science. It has promoted an ecosystem which has scant regard for scientific knowledge and has institutionalized practices which undermine science. For example, it recently allowed Ayurveda practitioners to conduct surgical procedures, such actions end up undermining Ayurveda and modern medicine which are two completely distinct systems of healing. More importantly such actions end up making a caricature out of science thus reducing public trust in science, which can have disastrous consequences. Distrust of science resulting in climate change denial and anti-vaccination and anti-evolutionism is a common thread among right wing across the globe hence state sponsored undermining of science and evidence-based decisions in India will only act as fodder to Hindutva right wing groups.

Science as a Law and Order Problem

To add a cherry to the top the Home Secretary has in the guise of a circular issued a gag order directing all state govts prosecute those questioning the lack of transparency around Covaxin. If such is the case then the first person to be prosecuted will the Director Genera of the ICMR itself, who is an author of a just published paper in the journal Lancet which states that “results reported here do not permit efficacy assessments. The analysis of safety outcomes requires more extensive phase 2 and 3 clinical trials.” Turning science in to a law-and-order problem will only increase the doubts about the vaccine and will lead to an increase in vaccine hesitancy. This is a dangerous situation for India where millions of children get vaccinated every year for a variety of diseases. This is literally playing with lives.

By hurriedly approving the ‘indigenous’ Covaxin the Modi Govt. is more interested in trumpeting his empty slogans of Make in India and Atmanirbhar Bharat rather than rolling out a safe and effective vaccine which has gone through the rigors of trials and tests. Modi has an eye on 26th January to grandstand his achievement of an Indian vaccine. Gaining political capital by rushing a vaccine is a dangerous game as it puts millions at risk but Modi has shown that he and the BJP are willing to sacrifice anything under the sun to gain political capital, transparency and safety are of little importance to them. The BJP and RSS have gone on a social media overdrive to portray Covaxin as the nationalist vaccine. Not surprisingly all those who have questioned the lack of transparency and the violations of established protocols have been branded anti-nationals.

If Atmanirbhar Bharat means the jettisoning of principles of science then one can only infer that the target of the vaccine is not the virus but to gain political capital by putting millions at risk. It is clear that Covaxin has little credibility and is being forced down on people because India is supplying Covishield to countries like Nepal and Bhutan not the homegrown vaccine. If Covaxin is reliable why not supply it to our neighbors also?

Most importantly Narendra Modi who misses no opportunity to be the center of attention has not taken the vaccine himself. Surely it is a valid question to ask why Modi who purports to lead from front has stayed away from the jab. It is probably because he knows something which we don’t. As India’s vaccination drive expands there are daily reports of adverse reactions but the Modi Govt is more interesting in harvesting votes from the vaccine rather than provide Indian citizens a safe, effective and trustworthy vaccine against the coronavirus.

Most importantly Narendra Modi who misses no opportunity to be the center of attention has not taken the vaccine himself. Surely it is a valid question to ask why Modi who purports to lead from front has stayed away from the jab. It is probably because he knows something which we do not. As India’s vaccination drive expands there are daily reports of adverse reactions but the Modi Govt is more interesting in harvesting votes from the vaccine rather than provide Indian citizens a safe, effective and trustworthy vaccine against the coronavirus.