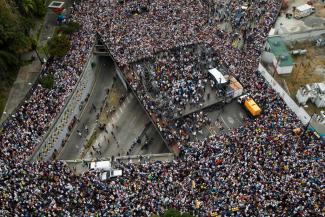 In the Venezuelan National Assembly Elections held on December 6, 2020, the people of Venezuela have resolutely thrown out the puppet of US imperialism, Juan Guaidó into the dustbin of history. The Grand Patriotic Pole (GPP) of the ruling United Socialist Party of Venezuela (PSUV) and other parties upholding the legacy of Liberator Simon Bolivar and Commander Hugo Chavez were elected into the National Assembly by the people, securing 257 out of 277 seats in the country’s parliament.

Guaidó was elected to the National Assembly in 2015, and in 2018 he declared himself as the interim President of the country, betraying the mandate of the people who elected Nicolas Maduro as the President. Guaidó was propped up by the Venezuelan oligarchy and far-right wing forces which aimed at ending the socialist policies in the country. Backed, funded and supported (both politically and militarily) by the United States and its puppet states in Latin America like Colombia, Guaidó and right wing forces clandestinely organised multiple coup attempts, including assassination attempts against the democratically elected government of Nicolas Maduro.

These groups also attempted to take over military bases and infiltrate mercenary forces into the country to carry out attacks and organise sabotages against vital infrastructures in Venezuela. In May 2020, a large number of mercenaries including two American military contractors employed by Silvercorp attempted to infiltrate into Venezuela by sea and overthrow the Maduro government. The attack failed as Venezuelan people and the civic-military militia of the Bolivarian Army captured the mercenaries as they attempted to enter into the country. After the attack, the contract document signed in October 2019 between Silvercorp and Guaidó’s Strategy Committee came into public domain. The Strategy Committee was formed by Guaidó with the goal of exploring all available options for overthrowing Maduro from power and installing himself as president.

The fall of Juan Guaidó is a victory for the people’s movement and a rebuff for US led imperialism forces which for decades has been trying to overthrow the Venezuelan government.

Despite the inhuman and criminal economic blockade imposed by the US on Venezuela, the people are determined to continue their heroic resistance against all nefarious plans of US backed Venezuelan oligarchy to dismantle a process of building a Venezuela of workers and toiling masses as envisioned by Chavez.