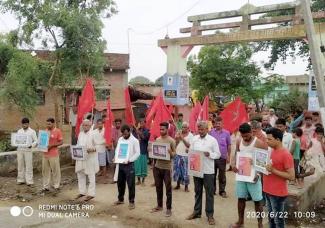 CPIML organized a countrywide day of mourning on 22 June to pay tribute to the brave soldiers who fell in the Galwan Valley. The party has condemned the misleading and contradictory statements made by the Prime Minister and his party and government. The government has no right to keep the country in the dark.

Homage meetings for the martyred soldiers were organized in all the states in Party offices as well as open places wherever it was feasible in the lockdown. People joined to pay tributes to the fallen soldiers and to ask the government as to why it is hiding the truth from the people about how and where the soldiers were killed.

Hundreds of activists from several districts of Tamil Nadu observed Mourning Day. They criticised Modi Government’s diplomatic failure leading to such an impasse and deaths of many soldiers.

CPIML leaders including former MLA Rameshwar Prasad, MLA Sudama Prasad, Madhuri Gupta, Rakesh Manjhi and Rajesh Gupta visited Taranagar village in Bihata (Patna District) on 17 June and paid tributes to Jawan Sunil Kumar who fell at the India-China border at Galwan. They met and spoke with the bereaved family. Jawan Sunil Kumar’s father is Shri Vasudev Sah. Another brother Anil Kumar was also in the Army and is now living in the village after retirement. Martyr Sunil Kumar leaves behind 3 children—a daughter and two sons. The entire village is plunged in grief.