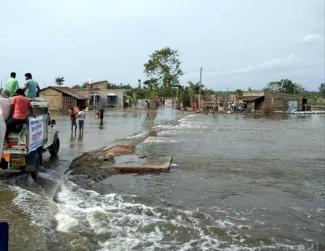 CYCLONE Amphan, one of the deadliest storms over the Bay of Bengal struck hard on June 20 and devastated southern districts of West Bengal including South and North 24 Parganas, Kolkata, Howrah, Hooghly along with parts of Orissa. The wreckage due to severe wind flow and rain fall took a heavy toll on lives, property, houses and trees. Amidst Corona outbreak, this ravage has rendered thousands homeless, destroyed crops, agricultural fields and fisheries, broke buildings and embankments, hit electricity and water supply. Despite such huge loss and sufferings, the Central Government failed to cooperate, refusing to declare it a ‘National Disaster’. While the relief announcements from both the State and Central Governments were still stuck in bureaucratic formalities, corruption and irregularities, the common people of Bengal showed their determination by extending hands towards the affected victims. With the pledge to rebuild, rehabilitate and reconstruct Bengal, numerous initiatives have been observed from distributing ration, water, baby food, tarpaulins, clothes, medicines, sanitary napkins to arranging medical camps, pond renovation etc. Taking the Lockdown Relief work one step ahead, CPIML and mass organizations like AISA, RYA, AIPWA, AICCTU, Gana Sanskriti Parishad, AIPF, AIKM, AIARLA with help from few other organizations and individuals, came to the forefront to stand by the cyclone-affected areas and people. 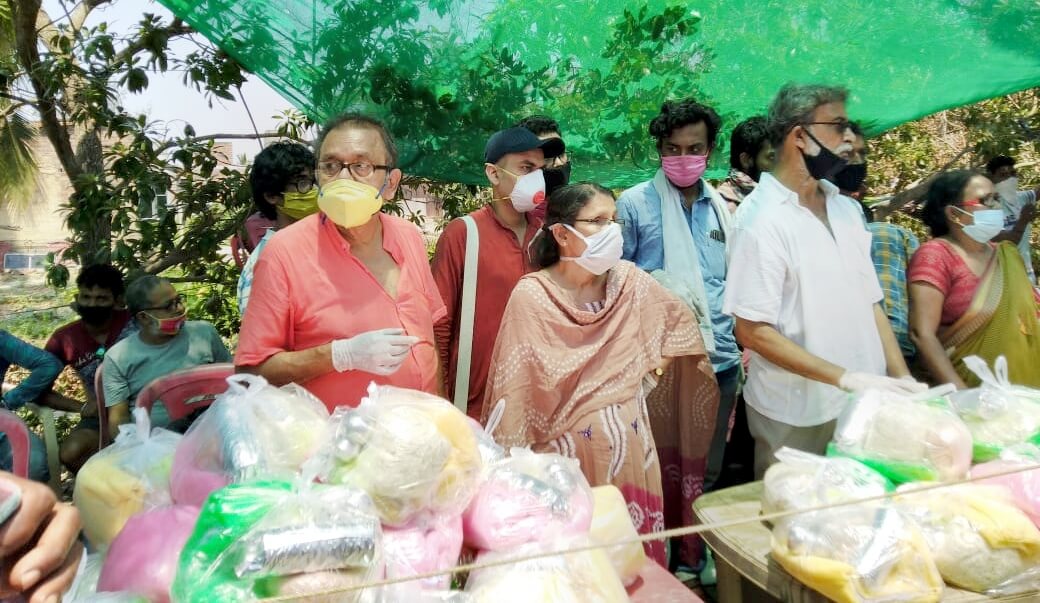 Almost the entire district of South 24 Pargans has been devastated by the havoc wreaked by Cyclone Amphan which was even more destructive than Cyclone Aila 10 years back. Relief efforts were conducted in Kultoli, Canning, Bakhrahat, Sundarban and Budgebudge with help from AISA, RYA, AIPWA, Forum for People’s Health, PUCL, Arijit Mitra Smarok Committee and Jadavpur Commune.

Dakshin Budhkhali is a remote village, 25 km away from Canning Subdivision situated on the west bank of river Matla, very close to the estuarine region. When the relief team reached to the village, it was bearing the signs of devastation everywhere. The earthen embankment on Matla river collapsed and water flooded out the agricultural lands and ponds leaving layers of saline water on them. This region is known for diverse vegetable production and intrusion of salty water on the croplands has made them unusable for at least 3 cropping seasons. The ponds were also contaminated by saline water. Extensive damage to the kuccha houses and collapsed trees were distinctly visible. Even after 20 days of the cyclone passed by, there was no electricity. Villagers were furious with the local Panchayat members due to massive corruption in relief distribution. The relief team distributed ration kits with essentials like rice, potato, lentils, soybean, oil, biscuit, soap, detergent, candles along with tarpaulins, essential medicines and clothes among 150 extremely affected families. 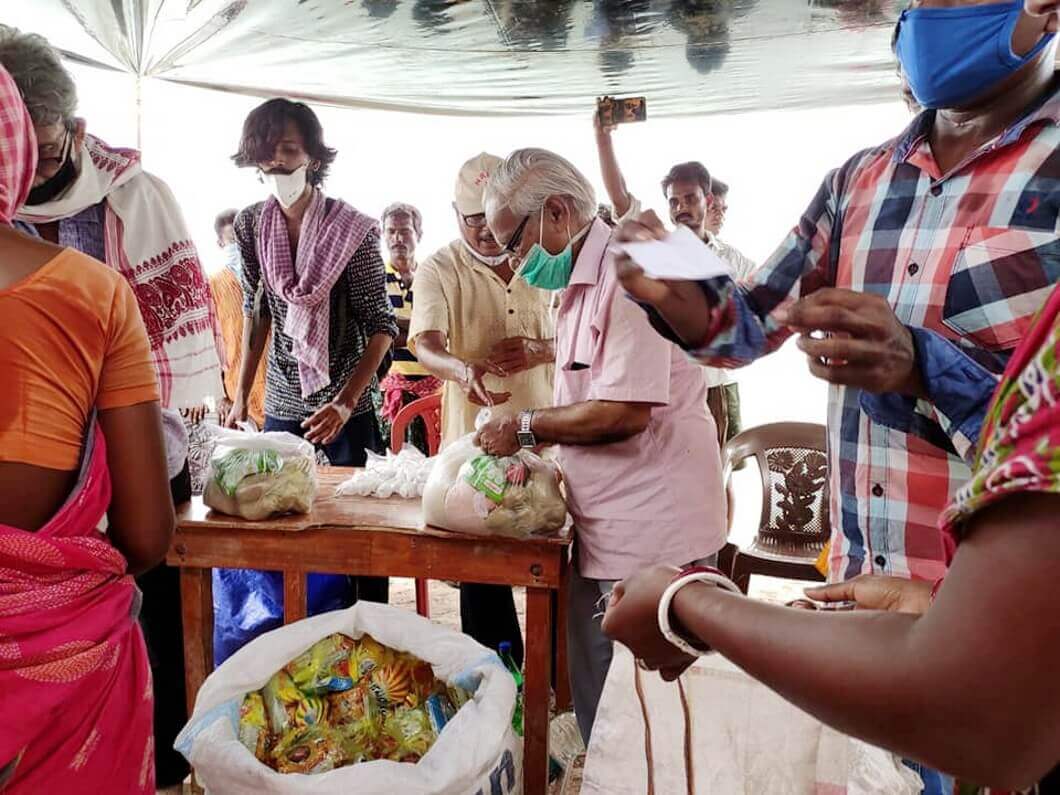 Bally island in Gosaba Block is one of the numerous islands of Sundarban mangrove delta which faced the extreme severity at the foremost being the first line of defense. With broken embankments, shattered houses, submerged farmlands and destroyed fishery ponds, Cyclone Amphan left the people of the Sundarbans with no livelihood options, except being solely dependent on mangrove forests. Even leaves of the trees turned wilted and yellowish due to salt water fog during the cyclone. A section of people from Bally island working as construction laborers had got stranded in Kerala, Maharashra and other states due to the unplanned Covid Lockdown. Women gathered in the relief camp said they hardly have been given employment under job cards. Their lives are now at stake due to double blow of Lockdown and Cyclone. When our relief team reached the remote village in a ferry from Gadkhali, villagers showed how they had to repair the broken mud embankment with sand bags all by themselves to resist further ingression of salt water into the village. Ration kits, tarpaulins and other essentials were distributed among 200 extremely needy families of the village.

Bakhrahat village in Bishnupur 2 Block is mostly dominated by poor marginalized people engaged as daily wage labourers. Kuccha houses have been partially or fully destroyed but yet to receive any compensation. Dry food items were distributed on emergency basis among the affected families suffering from both Lockdown and Amphan Cyclone.

Banshra Panchayet of Ghutiyari Sarif in Canning 1 Block is hugely deprived of government relief programmes. People mostly working in unorganized sectors have lost their jobs during lockdown and cyclone Amphan has further taken a heavy toll on their livelihoods. Essential ration have been distributed among 115 Amphan ravaged families. 4 quintals rice and 50 kg lentils were also provided to the local community kitchen along with 25 tarpaulins.

To stand beside the Amphan affected citizens of Sankijahan colony in Gopalgunj of Kultoli Block, approximately 120 km away from Kolkata, our relief team distributed rations, mosquito nets, clothes, medicines and sanitary napkins among 150 families. The entire Kultoli block, especially the villages adjacent to the river course has been suffering from the aftermath of Amphan. While fishery being the dominant livelihood for the villagers, most of the fishermen have no employment currently. Those lacking ration cards had no access to free ration as declared by the government. Even the homeless people received no tarpaulins or any kind of help from the local panchayat to rebuild their houses.

AIPWA comrades disbursed ration kits among 100 families in ward 3 and 9 in Pujali Municipality and Jamalpur area in Nischintipur Panchayat of Budgebudge. Life has been halted in this region as all the kuccha houses collapsed and there is hardly any livelihood option left. As learnt from the villagers, the Panchayat seems to be highly ignorant about allocating compensation to the affected people. 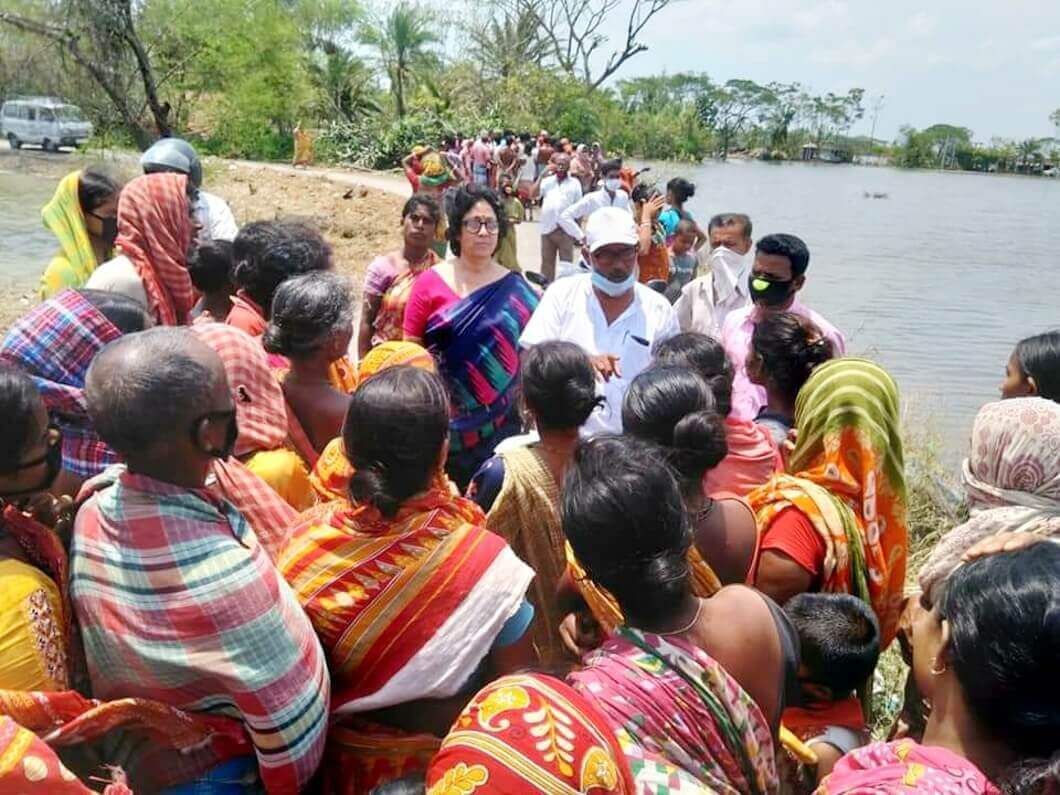 Hasnabad block in Basirhat subdivision was one of the worst affected blocks where long stretches of the region got completely inundated as the mud embankments over river Ichhamoti got collapsed. Thousands became homeless with no provision for livelihoods in the submerged villages. The situation got worse after the full moon high tide emerged just after the landfall of Amphan cyclone. On the day of relief distribution, our team could not even reach to the targeted area after waiting for 3 long hours as the entire road was completely under water. Many people had to swim to reach locations where relief was being distributed. The relief team distributed ration kits, water and sanitary napkins among 1100 families if Baliadanga, Joygram, Tiyamari, Khan Pukur villages in two consecutive relief drives with the help of Nirman Sanskritik Sanstha and students of Jadavpur University.

River embankments in Minakha Block in North 24 Parganas were found to be completely destroyed. Ration items and essentials were distributed among 100 families of Uchildaha village and dry foods provided to 200 families in Uchildaha garh. 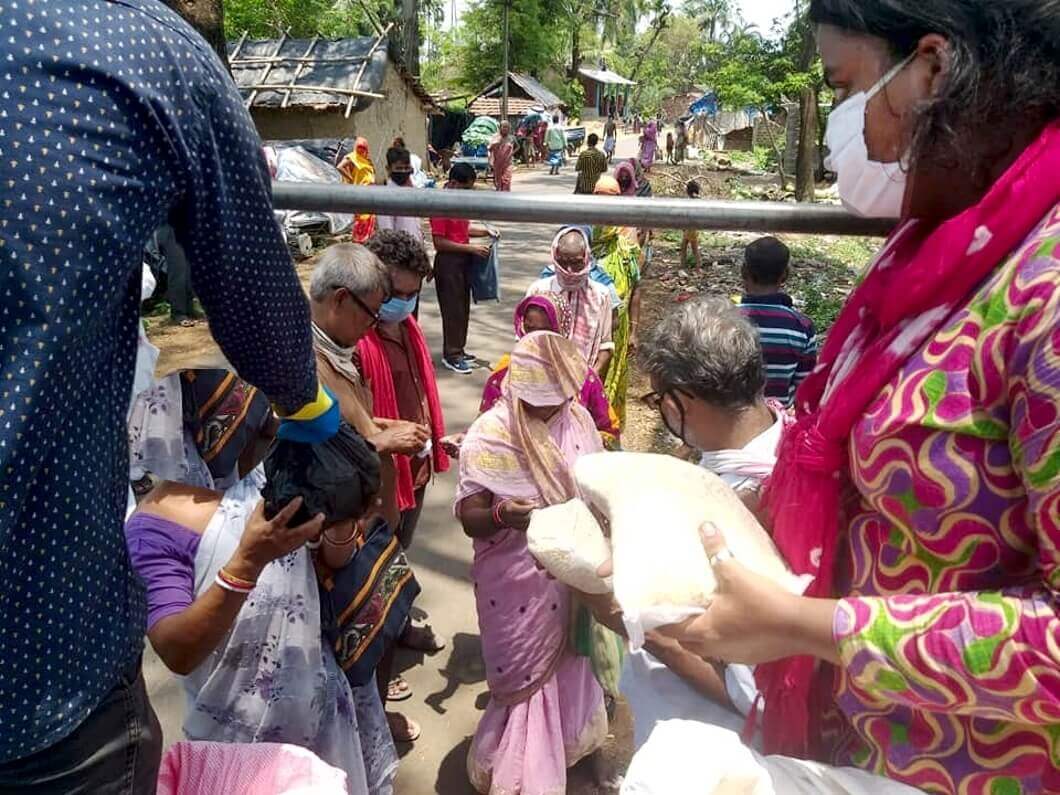 A team of AISA and CPIML reached to Amphan ravaged Bagnan in Howrah and distributed relief materials to villagers of Bangalpur, Harop, Haturiya, Brindabanpur, Pipulyan and Monipara. Comrades had to carry the relief materials by themselves in Pipulyan village as the roads were completely collapsed till then.

Cyclone Amphan had ripped through the slums in urban region and left trails of severe destruction. Most of those slums live in extreme unhygienic condition with minimal access to sanitation and safe drinking water. In Arupara-Kamardanga slum area of Rajaramtala, AISA comrades distributed dry ration among 100 families. The area being congested has further risk of spreading dengue or other vector borne diseases due to water logging. The relief team also helped to sanitize the slum by spraying disinfectants. In Park Circus slum, essential rations were provided to the extremely affected families. Ration and tarpaulins were also distributed in Ballyghat slum on the very next day of Amphan cyclone. AIPWA comrades arranged ration items for the Amphan affected citizens of Arupara.

Relief distribution among distressed families of Renia in Sonarpur Rajpur Municipality was done by AIPWA and local unit of CPIML.

Let us stand in this difficult time beside our citizens. Let us rebuild Bengal!