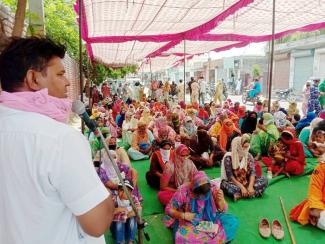 EVEN before the government announced the unlock plans, the women of Malwa area of Punjab had started coming out to oppose the highhandedness of the recovery agents of microfinance companies. These women, mostly dalits, had taken cash loans ranging between Rs 15000 to Rs 75000. The companies are charging exorbitant interest rates of the order of 26 percent per annum. The modus operandi of these shady companies is uniformly based upon formation of self help groups of 10 to 20 women who are then given a group loan of a lump sum amount which is divided amongst them and comes down to Rs 25000 per head.

When they cannot pay full instalment amounts, they are encouraged to take a larger loan of Rs 35000 each which is given to them after adjusting the principal and interest amount of previous loan. This in effect makes it the same old method of private moneylenders to trap the peasantry into the debt trap. The additional factor is that each woman is under tremendous social pressure from the rest of the group members to pay back the instalments on time because of the threat that if they default, the whole group will be debarred from future loans. Now, while organizing the agitation, this sense of group and the experience of the group leaders is proving helpful in many places.

According to Bhagwant Singh Samaon, state president of Mazdoor Mukti Morcha, who has been leading the movement since its inception, the phenomenon has been going on for last twelve years on smaller scales, but following the 2014 RBI policy of giving licence to the Non Banking Financial Compa-nies in the name of extending the financial network to the poorer sections, the trend has gained mo-mentum. Though, the number of companies actually licensed by RBI under its policy is yet unknown, large number of companies are active on the ground and the legality of many of these companies is also suspect. The number of women, rural as well as urban, trapped in this net is huge, maybe as high as 90 per cent.

The issue ame to a boil as sources of income dried up during lockdown but the company agents insisted on payment of their due instalments. As the news of clashes in many villages began to spread, thousands of women in the districts Mansa, Barnala, Sangrur, Moga and Bathinda of Punjab and the adjoining Fatehabad district of Haryana rose in protest. Massive protests of women were or-ganized at Budhlada, Mansa, Barnala, Bathinda. Our party realized the gravity of the issues and took the initiative of organizing and uniting the protests into an agitation and framing concrete demands to take the agitation forward.

In many places the women have successfully gheraod the company officials and their goons while trying to threaten women nto paying instalments. We have so far organized more than a dozen rallies at circle levels which have been attended by more than 5000 women in spite of the lockdown restrictions and difficulties. In Majha region, Com. Vijay Sohar has reported that about 30 villages have been organized so far and a rally of 400 participants was organized at Dharival in Gurdaspur district.

Now under pressure of the agitation many district magistrates have announced a ban of forced collec-tion of instalments citing an RBI notification, but the agitation has keeps growing around larger demands, with many more organizations also joining the agitation.

The main demands of the agitation are:

1. Complete loan waiver for all women.
2. Compensation of Rs. 10,000 per month for lockdown period for all poor families.

In Tamil Nadu, women are protesting across the state against harassment by MFI agents in the name of loan recovery. On 29 May protests were held in Vizhupuram, Pudukkottai and Madurai districts. In several places where AIPWA and AIARLA have an organizational presence women activists argued with the agents. Heated exchanges took place. In some places the agents had to retreat in the face of the opposition by women.

Subsequently, AIPWA and AIARLA units complained to the district authorities regarding the harrassment from the MFIs, demanding action against MFIs under the usury prohibition act (Tamilnadu Prohibition of Exorbitant Interest Act, 2003).

Following this, district collectors of Thanjavur and Madurai issued public statement in the media warning the MFIs acting against the RBI directions. Publicity and protests on this issue are going on in several districts.