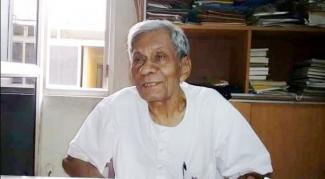 DR. Shyam Bihari Rai, Director of Grantha Shilpi, matchless in the Hindi publication world for social sciences publications, passed away on 10 March 2020. His life was the epitome of simplicity and resoluteness. After the fall of the Soviet Union, he worked throughout his life on the hazardous task of publishing Hindi translations of books on Marxist thought and ideology. The weakness of the Left movement in Hindi speaking areas is almost an acknowledged fact, but Rai sahib still discharged this responsibility with great courage.

Dr Rai was confident of the existence of readers of serious Hindi literature. The basis of this confidence was his Marxist understanding of social movements. At the time that he entered the world of publication, a somewhat different generation of new readers in Hindi had come to the fore. The social composition of this generation was different from that of the previous generation. This included students from backward sections who had come into higher education as well as a large number of girls, all of whom had a keen desire to read and acquire an understanding of the world. In addition to literature this new group of readers was taking an interest in writing also, as a result of identity discussions and intellectual contact. Rai Saheb started familiarizing these readers with cognitive reflections and writings of high quality. He introduced these readers to the books of Marxist thinkers from all over the world and from all disciplines. He knew these readers and maintained a lively dialogue with them. Through the success of his publications he broke the myth that Marxism holds no attraction for the Hindi speaking intellectual collective.

He was born at Birpur village in Ghazipur District, Uttar Pradesh. The anti-zamindari movement led by the undivided Communist party was going on in that District from the time of independence. Contrary to the belief of land owners, that was a movement which greatly attracted the young. Rai Saheb, though himself born in a land owner caste, was also deeply influenced by that movement. In order to understand the extensive impact of the Communist party in Ghazipur District, the interesting fact should be noted that in the first general election the Communist Party won the Parliamentary seat as well as all four Assembly seats from the District. This initial impact on Dr Rai became even deeper when he came to Kanpur for education. At that time Kanpur city used to be the hub of the Left workers’ movement. Here he directly experienced another facet of the Communist movement he had seen in childhood, and his initial commitment was reaffirmed even more strongly.

His experience relating to trade unions and farmers’ issues in the Communist movement made him an important collaborator with the Left movement in the intellectual world. As Editor of the Hindi Department of an important international publication like Macmillan, he procured and published many translations done by Gorakh Pandey, Founder General Secretary of Jan Sanskriti Manch.  ‘Manaviya Sartattva’, Gorakh Pandey’s translation of George Thompson’s book was published by People’s Literacy through Rai Saheb’s motivation.

In search of livelihood, Dr Rai initially took up the teaching profession in Kanpur and taught Vinod Mishra (late General Secretary of CPIML) and Brij Bihari Pandey (Editor of CPIML Hindi organ Lokyuddh) when they were in Middle School, both of whom who had lasting contact with Rai Saheb. As a witness to this relationship that went beyond teacher and student to the warmth of comradeship, I can assert that he was indeed a rare person. Brij Bihari Pandey translated for him Marc Bloch’s book The Historian’s Craft into Hindi with the title ‘Itihaskar ka Shilp’. He had an extremely warm and lively relationship with our Party. Often he used to walk over from his office to our Party office.

Shyam Bihari Rai’s profound ideological studies and experience prepared him for undertaking the historic responsibility of disseminating Marxist writing in the Hindi language through Grantha Shilpi Prakashan during a phase when Marxism and Communism had to fight their way back into popularity. We salute his memory!