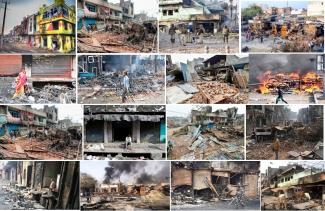 ( Kawalpreet Kaur, student and President of the Delhi Unit of AISA, reflects on the legacies of the 1984 and 2020 targeted killings in Delhi, and the lessons these legacies hold on solidarities )

ON February 23rd evening the entire city was returning back from the routinely weekend rituals and the night was throwing light on massacres of the day light, my father quietly picked up his three decade old notebook and started translating his troubled soul on the strained sheets which had become yellowish now. On being asked why he looked so exasperated, he said with his restless and anticipating eyes “Delhi Hun Phir Hilli,” (Delhi shook again).

In India’s capital bearded men with skull cap signified what the turban did 36 years ago. The entire pogrom (using for the lack of a better word) looked as a rehearsal of a larger schema which seems to unfold in days to come. Violence continued unabated for three days in Delhi’s Northeast area under the watch of state machinery. The entire social media was flooded with videos of such cruelty that one only wished were unreal. Videos of Delhi Police openly siding with the Hindu rioters, identification of Muslim houses, and shops for setting them on fire, the violent cries of “Jai Shree Ram” is all before us.

After three days of continued violence I along with a friend decided to visit the affected areas. A local boy who I met during the anti-CAA protests helped us with the way. We visited the localities of North East Delhi namely Kabir Nagar, Kardampuri, Maujpur, Noor-e-Ilahi and Mustafabad. It was Shiv Vihar which was hit the most but we were not allowed to cross the Mustafabad- Shiv Vihar border. So we halted at Babu Nagar of Mustafabad which is closed to Shiv Vihar. Thousands of Muslims who fled Shiv Vihar region had taken shelter in Babu Nagar area and nearby places. On reaching Babu Nagar I heard a small pat on my back by an old man who looked frail and appeared to be over eighty. His long white Daadi with a prominent black mark on his forehead which was a sign of Namazi could not be missed. He invited me to his scrap collection shop and insisted me to sit on the trunk nearby which he used both as a chair and table in his old shop. With a heavy voice he asked me “what will happen now?” I could see the moist clouding his eyes when he went on to talk about that day when mob from Shiv Vihar was prevented from entering in Mustafabad by the local Muslims. Hindus have lost shops but not lives he insisted, “humari to jaan ka nuksaan hai.” On knowing that I came to deliver Langar here, he told me that eight big cars had come from Punjab yesterday to deliver relief materials. His voice was low. He took me back to 1984 when similar violent mobs took lives of thousands of Sikhs in Delhi. He was living in Karawal Nagar at that time and saw bloodthirsty mobs dragging Sikhs by their hair and setting them on fire. He had saved life of at least five young Sikh men who as he recalled were smartly dressed with neatly tied turbans and daadi. He shook his head as if struggling within and said without looking at me “they may come back for Sardars again; they don’t want anyone to be above them.”

I also met Basheer at the site. Basheer had his small Parchoon shop which was looted in Shiv Vihar. He managed to save his and his children’s life somehow by trusting his intuitions and fleeing his home when the disturbances began. He now continues to roam in Chaman Park, Mustafabad. Not knowing what to do with his loss, he takes everyone to his shop in the hope that these English speaking ‘outsiders’ may do something. I know they wouldn’t be able to do anything. Nobody can. Basheer reminds me of Sardarni Attar Kaur whose husband was burnt alive in East Delhi’s, Trilokpuri in 1984. She too had been expecting justice but it has been over 36 years now. They both don’t know that the language of justice has changed long ago. Today justice is small amount of compensation and general appeal to ‘move on’. Many Basheer’s can be found in the locality. One such family I met had their entire house burnt. They had to flee from Shiv Vihar by making a hole in the roof of their house as the mob silently guarded their main gate waiting for them to come out. Similarly, Nusrat’s brother was to get married on 9th March, 2020 and found everything burnt to ashes when they returned after three days. They have received twenty five thousand from Delhi government as ‘compensation’ for the loss suffered. Thousands of families have left Delhi from these areas leaving behind their empty and burnt houses for all of us to witness and ‘document’. Over fifty people have died till now; many Muslims and some Hindus too have lost their lives after being hit by bullets fired by the mobs.

I am well aware that any comparison between the two may be erroneous but I can clearly remember the similar pattern between 1984 and 2020. At that time voter lists of Gurudwara elections were used to identify Sikh houses and ‘mobs’ with firearm, phosphorus powder, gas cylinders were called from different places who went from door to door killing the Sikhs. Sikhs were made to suffer indignities such as cutting of their hair and beard and taking off their turbans. My father still remembers his friends being ‘necklaced’ with rubber tyres and burnt alive in Bhajanpura. Today Muslim houses and shops were similarly identified and set on fire. Desecrated and burnt Masjids present the horrors of the pogrom. The old man whom I met in Babu Nagar could be the one who saved my father during 1984. I would like to believe that it was someone like him who saved my father and thus us. I am aware that nothing truly may change and violence on minorities may go unabated in near future too. But I am hopeful for knowing that it is for such old man like the scrap dealer who saved young Sikh men in 1984 that I am writing and speaking today. We all must strive now to become like them. Minorities must now strive to forge real solidarities with each other. Solidarities based on shared memories of loss, pain, grief and fight for justice as equals.

The elites have constantly championed that capital city is safe and nothing can happen here, clearly forgetting the massacre of thousands of Sikhs in Delhi. For them 1984 was always an act of aberration. The way they are describing the violence on Muslims as a clash and riot between two communities is appalling. The chilling testimonies of those who took part in the mobs that rampaged Muslim houses in Northeast Delhi and set them on fire shows the sinister pattern that works in these anti-minority pogroms. The detailed admission of a proud Hindu rioter who is also a cab driver, published in Scroll that “In 1984, my father fed the sword with blood, this time I colored it red.” His admission that his father had killed Sikhs similarly in 1984 as he did today with Muslims presents a devastating account of violence against minorities that has been going around with complete impunity. The similarity is so profound to ignore. Nobody is worried that no one has been punished in 1984 massacre till now and that meager compensation had come for the survivors only after long and tedious court battle.

I am writing this piece being fully aware that it will change nothing. I write this to express my anger at things being same even after ages. I write this to express the shared grief and to remember what has been conveniently forgotten. I am reminded of Osborne’s Jimmy Porter from his Look Back in Anger who was angry not because he felt everything changed but because he found everything to be same. I am writing this for many young Muslim men who I met in Northeast Delhi. The young boys who in their most beautiful phases of lives are forced to go to police stations and courts. They have to go around naalas in their locality to see which new body has been recovered. The young Muslim men who are assumed to be their own killers and are being picked up randomly by Delhi Police and charged with frivolous cases.

Looking around it feels that nothing has changed and there are no signs of it in the near future. The dark clouds give no signs of going away. I don’t want to end this with a sense of despair. Behind every cloud they say there is a silver lining. We have heard stories of Sikh man saving Muslims in his neighborhood by tying them turban in Gokulpuri and helping them flee. In return we saw a Muslim groom and his friends tied turbans in Giddharbah on his nikah to honor Sikhs for helping Muslims in Northeast Delhi. We saw Sikh groups heading to affected areas with relief materials. The silver lining came with the kind of real solidarities that Sikhs have shown to the Muslims. What we need now is visible solidarities on ground. What we need now is to step on the ground for each other. Time for an unconditional solidarity has come. Sikhs have shown the way.