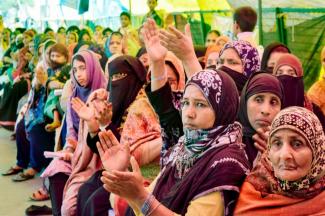 (This piece by Ujjaini Chatterji first appeared in The Leaflet. We reprint it with gratitude.)

The international day for women, March 8 every year is a day of global celebrations with a history of over hundred years of socio-political struggle and movements. Clara Zetkin one of the pioneers of the communist feminist movement, is remembered not just for her immense contribution in the organization of women within the communist movement but also for her immense vision on sexual freedom, society, struggle and fascism that is astoundingly relevant even today. In fact, particularly today, more than ever before.

It has been 73 years since India gained Independence. And our diplomats, politicians, textbooks and newspapers could not declare more emphatically that India is the World’s largest democracy. We have also learnt to repeat this assertion, largely without much scepticism. However, in contemporary India, the decay of civil liberties and individual freedom has begun to expose the cracks within the pillars of its democracy.

Professors, writers, lawyers, poets, artists, students, philosophers and thinkers are in jail without a fair trial. Activism and human rights are terms indicative of weakness and resonate anti-national activities with the Central government. Those delivering hate speeches are given police protection. Peaceful protesters are surveilled on through surveillance drones. Face recognition technology remembers everyone entering protest sites and dissenting to the policies of the government. Our phones, text messages and conversation are often snooped by the government to keep us under watch.

Use of lethal methods like pellets, bullets to fire on protesters and students is also a daily affair. Even as I write this article, New Delhi is just recovering from a fatal massacre of the Muslim community. Judges, who deliver justice, are transferred overnight. Over 9 million jobs have been lost in the last 6 years and the economy is at an all-time low point. New codes of labour laws, diminishing rights of collective bargaining are on their way. Yet, the media has another narrative, vibrant with conviction on the government and profoundly angry on the anti-national dissenters. 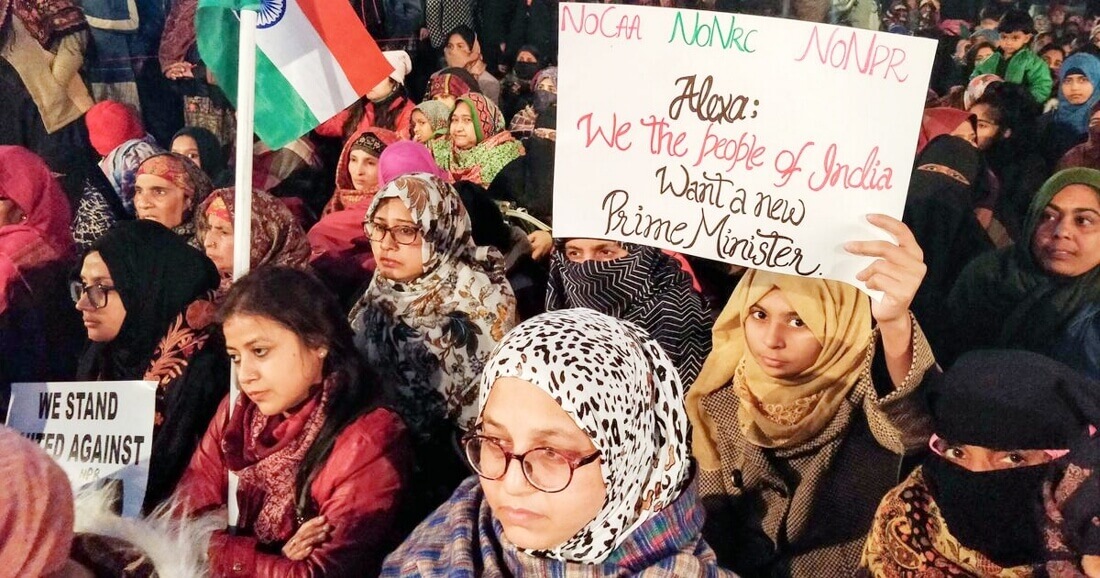 Sure, as of now, we have regular elections in India. Yet, we are no longer a democracy. And this international women’s day is more relevant than ever to notice the vibrant re-emergence of women’s struggle for freedom in India. Since, December 2019, India also witnessed the massive gathering of women from across the country to organise and protest against the Citizenship Amendment Act and the National Population Register -National Register of Citizens process.

While the protests were centred around the question of the discriminatory citizenship laws in India, they became much more than just protests. The protests by women from Shaheen Bagh inspired women across the nation to come together and build a chain of intersectional sisterhood which has now become the medium of collective democratic feminine voices of India.

Shaheen Bagh, is a piece of democratic India. Women aged twelve to ninety, are singing songs of freedom. There is a small stage. Behind the stage, there are pictures of Begum Rokeya Sakhawat Hussain (feminist author and founder of the primary school for girls in Calcutta), Dr BR Ambedkar, Sarojini Naidu, Savitribai Phule, Bhagat Singh and so many other revolutionaries.

Anyone can climb the stage and speak their mind. There is no censorship but there is a rule against hate speech. One may disagree with the audience, but she must reason herself out and engage in debate. There are no winners, however. Young boys are reciting their shayaris (poetries) on liberty and equality. Stories of Saadat Manto are being narrated and the works of Ismat Chughtai have made a comeback.

There is a bus stop that has been turned into a library. They call it the Fatima Sheikh-Savitribai Phule library. Anyone can donate any book and read anything there. And while they read, someone is delivering a talk about the history of women in protests in India. They are remembering the struggle of Satya Rani Chadha and Shahjahan Apa, whose relentless struggle and bond of sisterhood similarly organised women hundreds of women against dowry and influenced landmark cases and legislative reforms on dowry. Someone else is speaking about domestic violence and marital rape.

The conversations have emancipated the struggle from the spheres of a narrow Hindu Muslim debate to an open space of abundant ideas and liberation. There is no single leader of the protests. Every protestor is a leader in Shaheen Bagh. And while the talks continue and slogans of Azadi get louder in the background, a quiet artist is capturing the moment in his cartoons. Inspired by Shaheen Bagh, peaceful protests continue throughout India. This protest is now a movement.

Yes, we are no longer a democracy. Perhaps, we never were. 71 years ago, when India adopted the Constitution and promised justice, liberty, equality and fraternity, most Dalits, Adivasis, members of the denotified tribes and women had little understanding of its implication. However, the constitution was a beginning. It was the beginning of a revolution that would reform the dehumanizing ways of Indian society into an inclusive and democratic society.

The Constitution was also not an end in itself. It was a milestone in the thousands of years of struggle of the disenfranchised Dalits, Adivasis and women of India. And today, the women of Shaheen Bagh and the rest of India have pioneered that vision of the constitution by upholding its most important facet of individual liberty and equality.

It is essential to understand that fascism, surveillance and curtailment of civil liberties are some of the key features of the assertion of crude masculinity of patriarchs. Patriarchy particularly distastes debate and alternate opinions and boasts of majoritarian masochism through the elimination of any diversity within the society.

As Clara Zetkin had observed, the emergence of fascism is intricately related to the economic crisis of capitalism and the decline of its institutions. She added that as the attacks and surveillance fascism escalate through racism, police brutality and xenophobia, the answer shall emerge from the working classes, as they fight to defend their unions, to save democracy and to pursue to equality. And that struggle has only begun in contemporary India.

While fascism and anti-democratic forces strike us with all their might, Indian women, from the conservative middle-class households have reclaimed their identity. No longer are these women mere mothers, daughters, or sisters. Today, each one of them is a comrade, fighting to assert their individuality, their opinions and their rights. They are demonstrating the power of dissent to the world, especially to the Indian government that is trying in every way, to break their will. This is a struggle between bloodthirsty hateful fascism and the vision of Indian Constitutionalism.