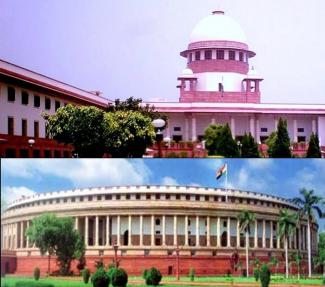 As a Supreme Court judge and then as Chief Justice of India, Ranjan Gogoi delivered a series of judgements favouring the Modi Government. These included a “clean chit” on the Rafale deal; delaying the hearing of the petition challenging the Constitutionality of the Electoral Bonds scheme till after it was a fait accompli; justifying the Kashmir lockdown; a judgement handing over the Babri Masjid to the fascists who demolished it; and many judgements and remarks bolstering the narrative of “illegal immigrants” needing to be identified via an NRC, summarily deported to Myanmar even if they were Rohingya refugees who do not enjoy citizenship rights there, or incarcerated in detention camps. Four months after his tenure on the SC ended, he was nominated by the ruling party to the Rajya Sabha (upper house). This is by far the most blatant and shameless display of conflict of interest in the history (admittedly stained and not spotless) of India’s Supreme Court and Rajya Sabha nominations.

The time-gap between Gogoi the judge and Gogoi the politician is little more than the blink of an eye. There has been no “cooling off period”. This naturally raises the question, if the judgements delivered by Ranjan Gogoi were coloured by the interests and views of Ranjan Gogoi the partisan politician.

The remarks of the newly-minted MP Gogoi are especially disturbing, since they remind us that this openly partisan man using vocabulary coined by right-wing TV anchors and politicians to diss political critics, till just the other day, held the most sensitive non-partisan post in the country.

Soon after being sworn in as MP, Gogoi spoke to TV channels known to have coined the terms “The Lobby” and “Urban Naxal” for all individuals and parties critical of the Modi regime. Speaking to Republic TV for instance, he said he hoped the Supreme Court would initiate contempt proceedings against those questioning the independence of the judiciary in light of his nomination. Gogoi’s words are reminiscent of Henry II, the king of England, asking about the Archbishop of Canterbury Thomas Becket, “'Will no one rid me of this meddlesome priest?” This rhetorical question was famously read as a hint to the king’s loyal knights to assassinate Becket. The former CJI is dropping broad hints to his former colleagues in the Supreme Court that they should punish those criticising his appointment!

In an interview to Times Now, another propaganda channel for the BJP, Gogoi said that those questioning his nomination represented a “lobby” - that term so dear to the propaganda channels to delegitimise all critics of the regime. We may recall that Gogoi infamously sat in judgement on allegations of sexual harassment against his own self while he was CJI, denouncing the allegations from the Supreme Court bench as manufactured by a “lobby”. He in turn made allegations against the complainant which resulted in her losing her job at the Supreme Court. Gogoi, today, is silent on the fact that the complaint’s subsequent reinstatement to her job implies that she was innocent of all that he was accused her.

Gogoi also claimed not to remember the Electoral Bonds case at all! A convenient loss of memory since his tardiness in hearing that case helped the BJP benefit from 95% of the non-transparent funding through the Bonds, making it far and away the richest party in the Lok Sabha polls which it went on to win.

Since Ranjan Gogoi is now a partisan politician , all the judgements that he presided over as a judge mere months ago should be revisited by another Supreme Court Bench. Such a measure, even if it does not undo the damage done by Gogoi’s tenure to the credibility of the SC, may at least acknowledge the harm, and make some amends. Failure to do even this much, makes a mockery of the independence of India’s higher judiciary.