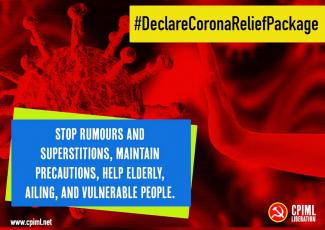 MORE than three months after the first Corona 2019 case was detected and reported in China, the World Health Organisation declared it a global pandemic on March 11, 2020. In the two weeks that have elapsed since then, the pandemic has spread to many more countries and become much more lethal. While China has managed to contain the outbreak - new cases being reported are only 'imported' ones, more than seventy thousand people have recovered and the reported death toll remains only a little above three thousand - Italy has witnessed many more deaths than China and the US now ranks third in terms of reported active cases. Almost the whole of Europe is badly affected, Spain, France and Germany being the most affected European countries after Italy, and in Asia while the pandemic seems to have reached a plateau in Iran (despite the impact of US sanctions massively hampering its response to the virus) and South Korea, the number of cases has begun to rapidly rise in India over the last one week.

While many killer diseases and epidemics have claimed more lives, the world has not witnessed such a pandemic in several generations and decades, especially in terms of the global spread of Covid 2019 and the havoc it has already caused in the developed world. In many ways this pandemic is a product of globalisation, a local outbreak of an unknown virus in a city in China has taken the whole world hostage in a matter of a few weeks. Countries and cities marked by increased integration with the outside world because of trade, globalised production network and consequent flows of capital and labour as well as travel and tourism, have had to bear the maximum brunt of the pandemic. And Europe being at the centre of many of these flows has been the worst hit. China’s response of virtually quarantining the massive population of Wuhan and cutting it off from the rest of the country and yet efficiently mobilising all its infrastructural and human resources appears to have effectively contained it in a few weeks. By contrast, countries and cities that failed to take such drastic measures to isolate and insulate themselves turned out to be so much more vulnerable.

However, it is not only the inter-connectedness of globalization but the specific form of neoliberal predatory global capitalism which has generated today’s crisis. Biologists like Rob Wallace are pointing to the role of industrial, profit driven corporate food production, land-grab and destruction of forests in releasing and spreading pathogens which were previously contained by long-evolved forest ecologies. And of course, neoliberal economic policies have then amplified the havoc. The neo-liberal policy environment that dominates today's globalised world economy has led to increasing commercialisation and privatisation of health care. The insurance based health care system of the US has made it so much harder for the common American people to get timely medical care. Even in a country like the UK which was once reputed for its excellent National Health Service, the health system has in recent years been virtually destroyed and dismantled. Faced with the challenge of combating the killer outbreak on a war footing, Spain took the bold step of nationalising private hospitals and pharmaceutical companies. Corona is once again forcing the world to recognise and accept the basic truth that public health cannot be allowed to be a reduced to a profit-making commodity for private players, it must be one of the basic responsibilities of every state to ensured health as a universal fundamental right.

In India, the first Corona case was reported on 30 January, full two months after the disease broke out in China, but the government hardly took concrete measures to expand the capacity of the health system to deal with the outbreak. While the WHO recommended extensive testing, India did nothing to ensure that. Instead of utilising all resources to ensure free testing the government has allowed private laboratories to charge close to 5000 rupees per test. The government did not even ensure adequate production and supply of protective equipment for the medical community, not to speak of making provision for more hospital beds and ventilators. The entire focus of the Modi government is on imposing drastic restrictions on the people without taking any responsibility to help the affected and vulnerable people. This negative approach is exacerbating the crisis on all fronts from public health to livelihood and supply of essential commodities. Large parts of the country are in a state of near-total lockdown and there are no measures to mitigate its economic and social costs for the common people.

The utter absurdity of the government's lopsided approach became glaringly palpable on 22 March when the country had the first trial run of a countrywide lockdown. The call was given by the Prime Minister through his public address on March 18 evening. The country witnessed massive panic buying, and concomitantly hoarding and profiteering in anticipation of possible drastic announcements. Predictably, the Prime Minister talked at length about the need for precautionary measures based on personal hygiene and social distancing, but he was conspicuously silent about any kind of urgent steps to expand testing and treatment facilities or any relief package to compensate the people for the loss of work and livelihood. The entire focus of his speech was on the observance of what he called a Janata Curfew (people's curfew) on 22 March accompanied by five minutes of mass clapping and clanging of bells and utensils. 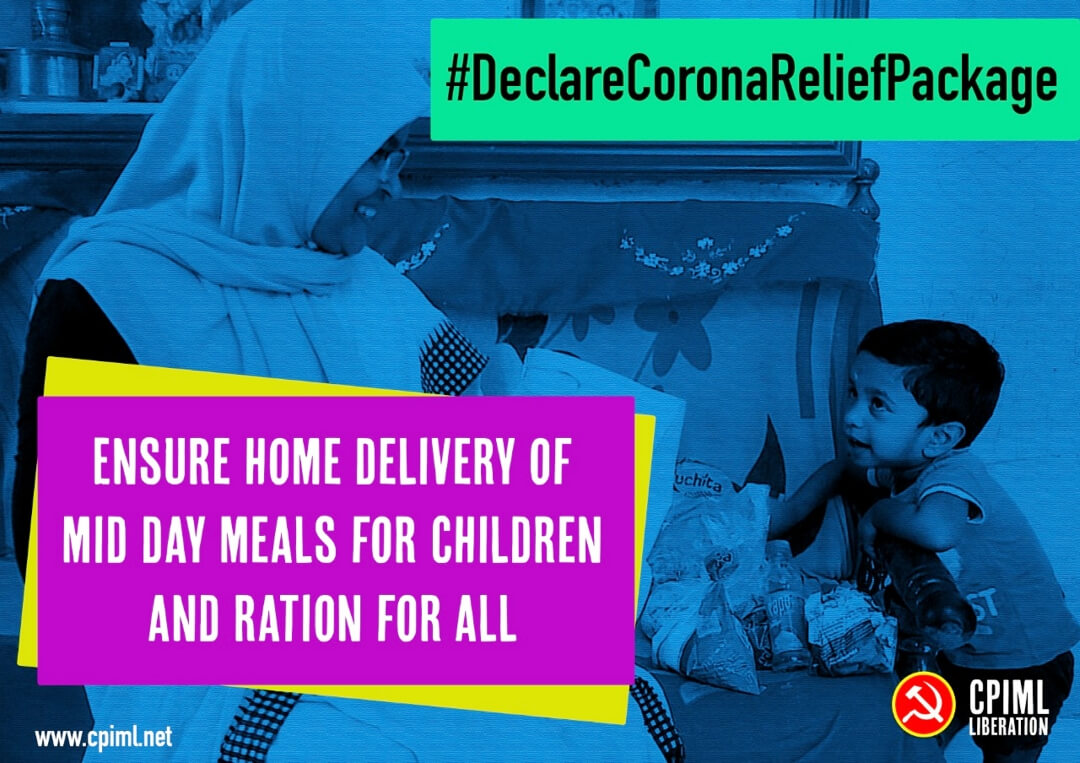 Thereafter the administration got busy with its typical event management approach, ensuring the curfew and organising the clapping. While the curfew achieved the objective of keeping people indoors, the clapping and clanging triggered a frenzied mass celebration in many places (with a viral video clip showing seniormost administrative officials taking the lead in a district in Uttar Pradesh) and made a complete mockery of all the precautions the people are required to maintain as individuals and as a community. The Sangh brigade and other bigoted elements are working overtime to spread rumours and all kinds of dangerously unscientific superstitious beliefs. These elements are even taking the opportunity to celebrate the most oppressive Brahmanical caste practices of segregation and untouchability as a model for social distancing! Along with this, globally and also in India, we can see a distinct rise of racist prejudices and hatred against China (in India, it is directed also against the people of North Eastern states like Manipur and Nagaland). The public health emergency is thus snowballing into a wider and deeper crisis where we are staring at not just an enormous crisis of public health and massive economic disruption but also the consolidation of a draconian surveillance state and recrudescence of bigotry, prejudices and hate. The opportunistic weaponisation of the crisis by the government can be seen already in the violent dismantling and destruction of the Shaheen Bagh protest site and arrests of activists despite the fact that the protest was already restricted by the organisers to a minimal symbolic presence in recognition of the need for Covid-19 precautions.

In his second address to the nation the PM announced the extension of a countrywide lockdown to 21 days, again failing to announce any relief package or to reassure citizens of the availability of essentials including food during the lockdown. Predictably, this address also sparked off panic buying, with crowds gathered outside shops desperate to stock up on essentials.

In the face of the Covid 2019 global pandemic we must therefore summon all our strength, resilience and courage to manage and overcome this multiple disaster and push for a social order of equity, rationality and sustainability in place of the crumbling edifice of predatory capitalism. In the immediate situation, in the spirit of physical distancing and social solidarity, we must demand free widespread testing and free healthcare for all; guarantee of food and essential supplies; subsistence allowance and food rations for all; plentiful public canteens dispensing cooked food, and hygienic environment in slums and villages.