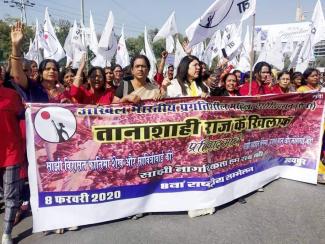 THE streets of Udaipur, Rajasthan were festooned with AIPWA flags, and women's movement posters to welcome the delegates from all over the country to the 8th AIPWA National Conference. All the participants in the Conference had Comrade Srilata Swaminathan very close to their hearts. Comrade Srilata, who had been AIPWA National President, passed away on February 5, 2017. She had always wanted to see an AIPWA National Conference at Rajasthan, which was the state where she had spent most of her life as a communist activist. In tribute to her the Conference was held at Udaipur in her death anniversary week. The main hall of Rajasthan College of Agriculture where the conference took place was named after Comrade Srilata for the occasion while the dais was named after Shaheed Kalibai, the young Adivasi woman killed by police in June 1947 for defending the right of adivasis to attend school defying feudal structures. 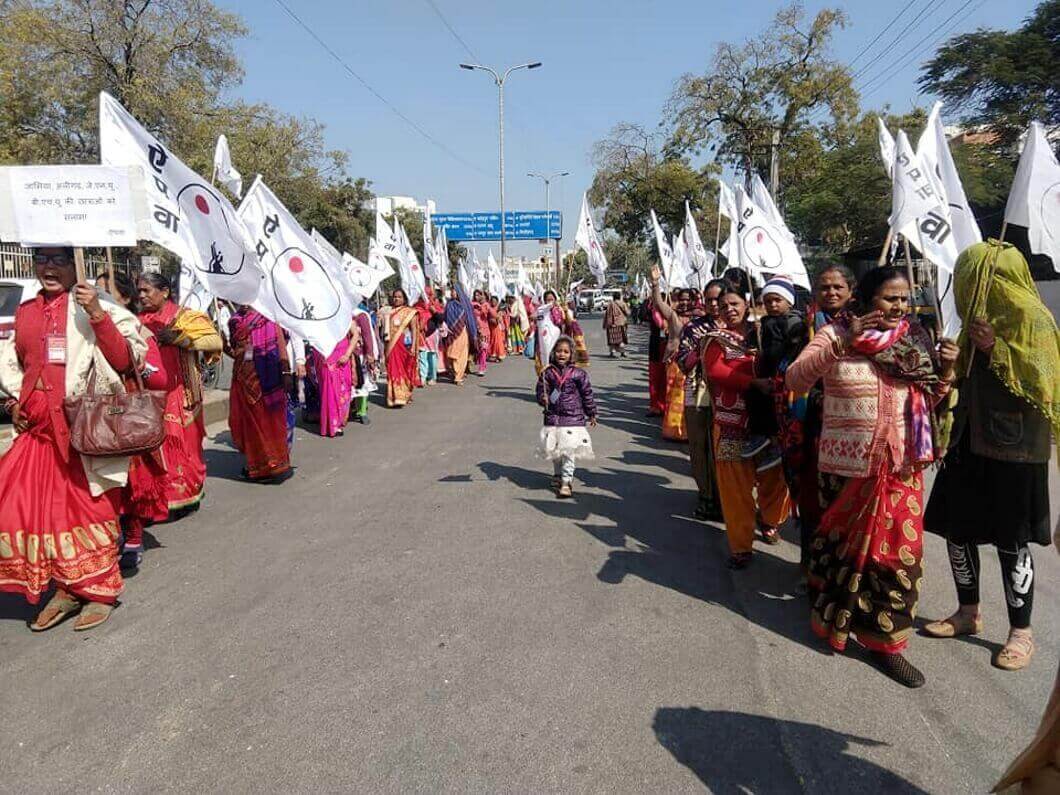 The Conference began with a massive procession by women through Udaipur city, during which AIPWA leaders paid their respects to a statue of Dr Ambedkar. Slogans for women's freedom and autonomy, demanding education, employment and heath care, justice for victims of gender based violence, and against the draconian CAA NPR NRC were raised by AIPWA members.

AIPWA vice president Professor Bharti S Kumar unfurled the AIPWA flag outside the conference hall, and everyone kept a minute's silence in memory of martyrs and departed comrades of the women's movement.

The inaugural session began with a rendering of a song 'AIPWA Zindabad', composed by Comrade Srilata for AIPWA's last conference at Patna in 2016, by a team of young women from Rajasthan. The session was chaired by AIPWA President comrade Dr E Rati Rao, and conducted by AIPWA Secretary Kavita Krishnan. AIPWA General Secretary Meena Tiwari welcomed all the guests and participants warmly to Rajasthan, land of the rebellious Meera Bai who left the deeply restricted life of a princess to follow her heart and conscience and become a poet-saint. She spoke of the shared legacy of Fatima Sheikh and Savitri Bai Phule, who together faced and fought Manuvadi reaction to achieve education for girls and women. The same Manuvadis who threw faeces at Savitri and Fatima, are wanting to replace the Constitution with the Manusmriti today, she said. That is why women and girls are at the forefront of the resistance to fascism in India today, because they know they have the most to lose. 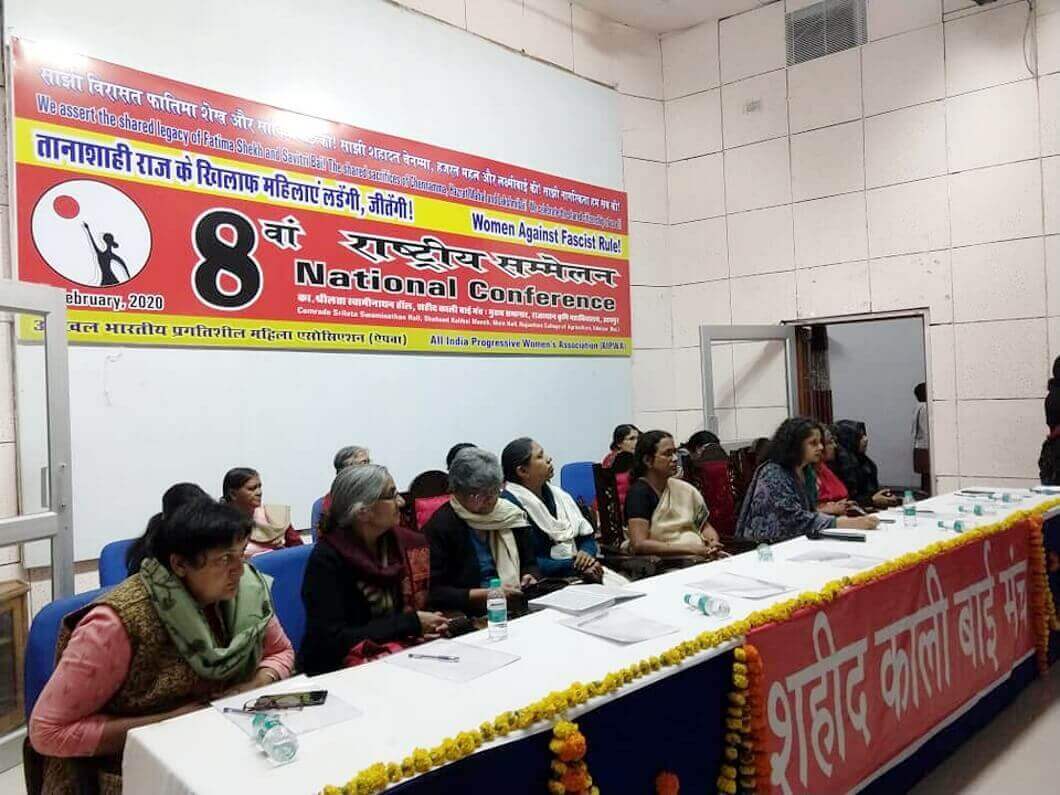 PUCL activist Kavita Srivastava, addressing the conference, said that the ongoing struggle was not just for our citizenship to be recognised and respected rather than doubted and challenged. It was also to assert the fullest rights and entitlements that the State owes every one of us as citizens - dignified employment, free and excellent education and healthcare, and justice and equality for all.

Former AIDWA leader Sumitra Chopra, and NFIW leader Nisha Siddhu from Rajasthan also greeted the conference warmly. AMU law student Sumayyah spoke of the resistance offered by AMU students in the face of vicious repression. Later, Jamia Millia Islamia students Akhtarista Ansari and Chanda Yadav, two of the four women whose actions defending a male student from police batons inspired the whole country, also addressed the conference about the ongoing movement in Jamia in the face of all odds.

Kavita Krishnan reminded the gathering that 70% of those left out of the Assam NRC were women - as a result of being undocumented. The consequences of having to prove citizenship on the basis of documents is most dangerous for women, she said. 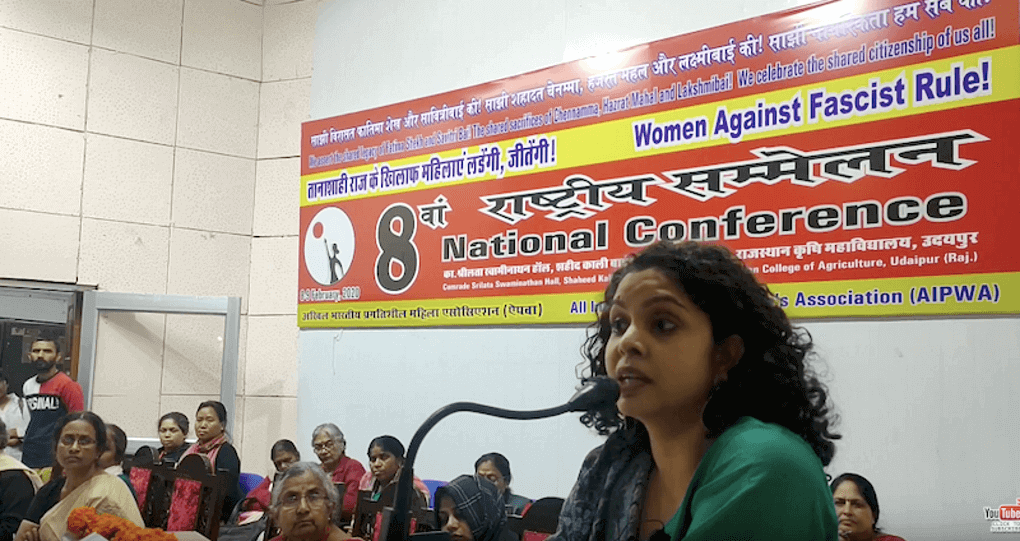 One of the guests at the Conference, Kannada writer and theatre artist Du Saraswathi, spoke eloquently about the lives and struggles of Dalit and working class women. She told two stories from the life of the Buddha with relevance to our times today.
The chief guest at the inaugural session, journalist Rana Ayyub, shared stories from her own life to discuss the discrimination that girl children face, as well as the indelible scars that communal violence inflicts on the lives of Muslims in India. She spoke of the investigative story she did at the age of 26, exposing the gang rape and cold blooded murder of Kauser Bi, wife of fake encounter victim Sohrabuddin, which resulted in Amit Shah, then Gujarat Home Minister, being jailed on charges of murder. She saluted the struggles of the women of the Shaheen Baghs all over India, who are fighting a life and death battle for India's democracy and survival.

Rajasthan comrades gave the guests mementos as a token of appreciation. AIPWA VP and Rajasthan Secretary Sudha Choudhary gave thanks to all the guests and participants who made the inaugural session a success.

The AIPWA Conference also felicitated veteran AIPWA and CPIML activist Comrade Meera, who spoke about her conviction that the present battle against fascism could only be won by a truly revolutionary struggle for social and political transformation.

On the night of the 8th February a cultural event took place where the Rajasthani Terah Taali troupe performed the traditional music and dance of Rajasthan. Du Saraswathi then performed her much acclaimed Santimmi Ramayana, which tells the story of Ramayana and Sita from the perspective of a Dalit woman worker. Hers was a heart warming performance which gave many subtle twists to the familiar tale of the epic Ramayana, including deploring the wars men inflict on the world, and celebrating a feminist friendship between Sita and Shoorpanakha. 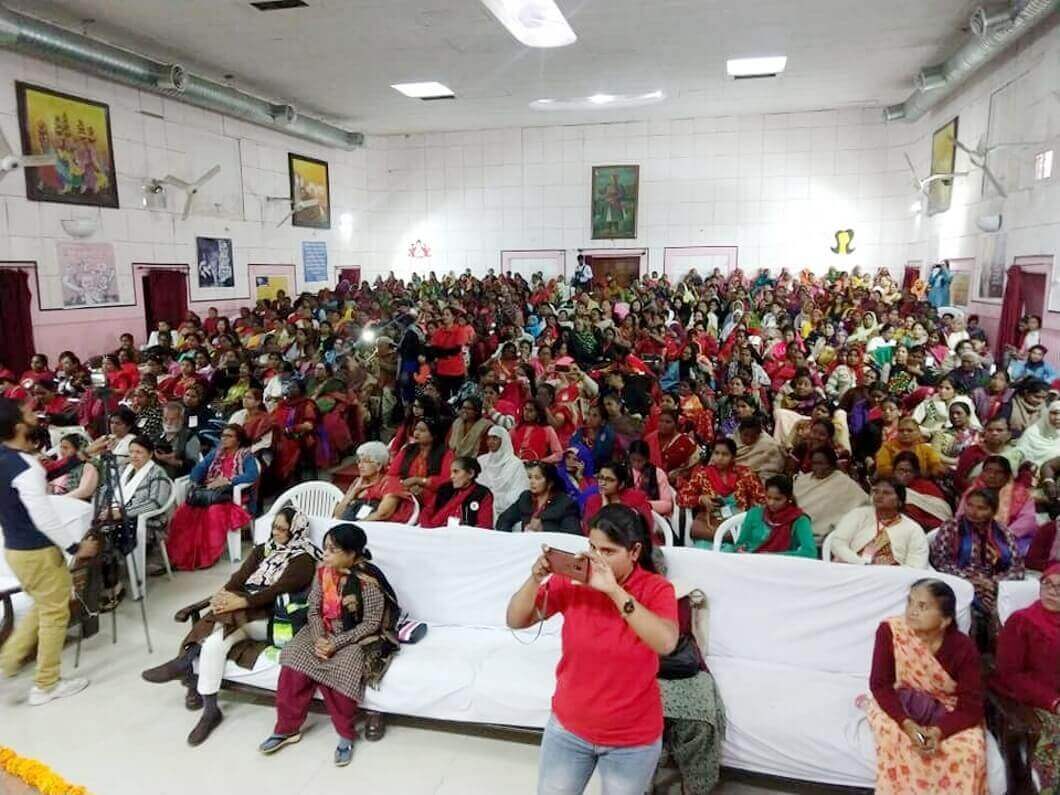 The delegates elected a 117-menber National Council and a 41-member National Executive, and re-elected Comrade Meena as General Secretary and Comrade Rati Rao as President. The conference resolved to conduct an awareness campaign from 25 February to 2 March highlighting the dangers of the CAA NPR NRC and asserting the mutual harmony and solidarity of Hindus, Muslims, Sikhs, Christians, Buddhists, Jains, Parsis and people of every community and faith. 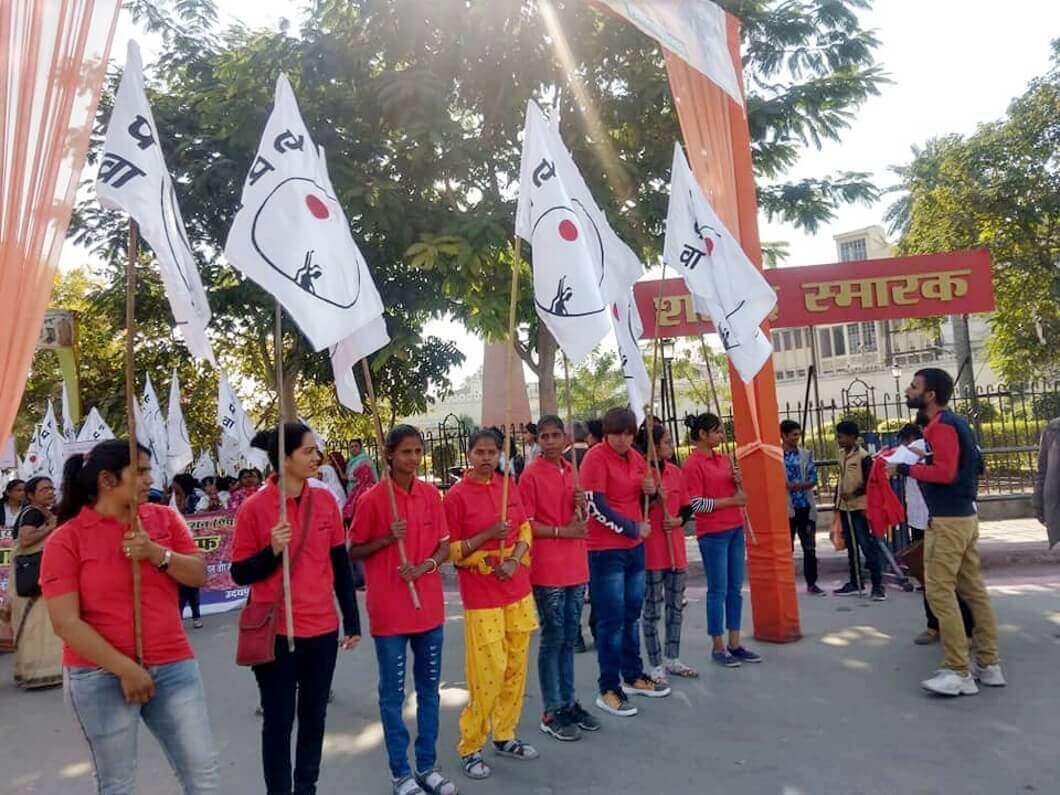 We in South Asia Solidarity Group would like to send our warmest wishes and our solidarity to the All India Progressive Women’s Association at this 8th National Conference in Rajasthan. The struggles you are waging against fascism and patriarchy in India are a great source of inspiration to us here in Britain.

From the movement confronting violence against women, rape culture, feudal and casteist oppression to the mass protests by women at Shaheen Bagh in Delhi (and the many Shaheen Baghs springing up all over India) against the highly discriminatory CAA and the fascistic NRC and NPR, your powerful collective struggles continuously strengthen our resistance here in the UK.

Under the British state’s racist immigration laws, Black and Minority Ethnic (BME) women have experienced brutal state violence. They are held like criminals and have faced sexual abuse and violence in detention centres. Others, like Sarah Reed, have faced police brutality and been forced into suicide by institutional violence under the Mental Health Act.

The current right-wing Conservative government under Prime Minister Boris Johnson (who is famous for saying that Muslim women wearing burkas look like letterboxes and Black people are ‘Piccaninnies’- a racist term) has eroded health, education and housing services and imposed a so-called ‘hostile environment’ policy which is scapegoating ‘migrants’. It has led to a huge increase in racist attacks on Muslim communities, with Muslim women being especially targeted. This right-wing state with its anti-women policies has also all but destroyed the refuges for women fleeing domestic violence built up over the years by Black and Asian feminists. As a result it is impossibly difficult for women to escape violence as there is no where safe for them to go. In many cases they are forced to return to violent situations where they are sexually and economically exploited.

At the same time Hindutva forces are actively working with the British state to prevent outlawing of caste discrimination in employment, education and public services and suppress progressive voices in academia and work places.

As we send you our warmest solidarity greetings, we also fondly remember Comrade Srilata – her laughter, her fearlessness and her spirit of resistance. We wish you every success for your national conference and look forward to devising new ways to strengthen our links and building a collective feminist force of resistance against fascism and racism. 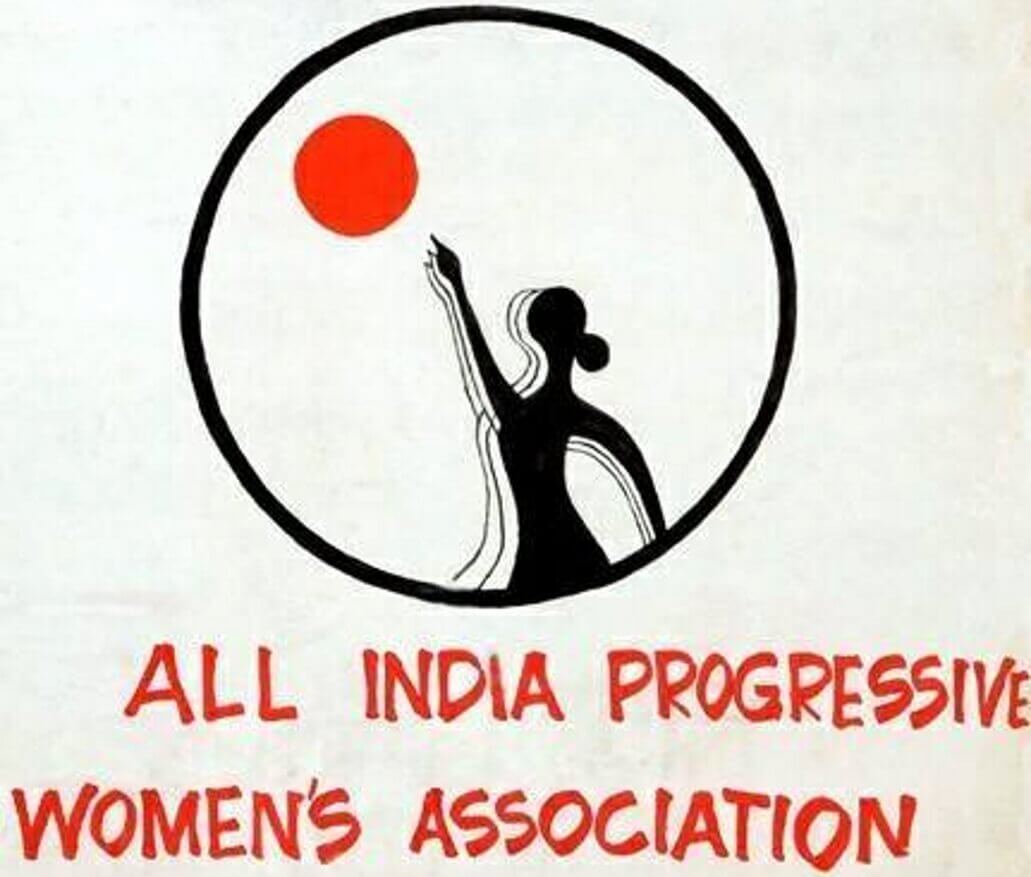 ABVP has submitted a letter to the VC of Mohanlal Sukhadia University, Udaipur, demanding sedition charges etc against AIPWA Vice President and professor of the University's Philosophy Department, Sudha Choudhary as well as other faculty members for hosting the AIPWA National Conference in the city.

The AIPWA National Conference was held successfully in Udaipur on 8-9 February. It was attended by noted journalist Rana Ayyub, theatre artist Du Saraswathi, women students of Jamia Millia Islamia, AMU, and JNU, as well as AIPWA delegates from all over the country. The Conference held a march against the CAA, NPR and NRC, pointing out that 70% of those left out of the Assam NRC for being undocumented, are women. The Conference resolved to fight the CAA, NPR and NRC tooth and nail, and to mobilise sustained support for the Shaheen Baghs all over India. At the Conference, the Chorus team from Patna presented a very effective skit exposing the anti Constitutional and anti poor, anti women agenda and workings of the CAA NPR NRC.

The ABVP has claimed that the AIPWA is 'anti Constitutional' and seditious because it raised anti CAA slogans. This is especially ironical given that the right to protest and agitate against governments and even against unjust laws is recognised and protected by India's Constitution. It is in fact the sedition law, the CAA, as well as the NPR and NRC that are anti Constitution, because they seek to punish dissent.

This is not the first time Comrade Sudha Choudhary has been targeted by ABVP. 5 years ago she had invited a retired academic from DU to present a paper at a seminar on religion. The academic in question was critical of the Left and also of Western scholars writing about Hindu religion. Comrade Sudha invited him although he disagreed with her politics. But ABVP demanded action against both Comrade Sudha and the visiting academic. They circulated a video clip of the visiting professor citing works of the Western scholars he was critiquing, to claim that he was “abusing Hindu gods”. This would be laughable and absurd except that the police did actually file a case against the professor. In the ABVP and Sangh scheme of things, scholarship itself (including actually reading and citing books to critique them) is taboo, as is dissent.

We call for solidarity with Comrade Sudha Choudhary and AIPWA, as well as all the other faculty members of the the University who are the targets of the ABVP witch-hunt. 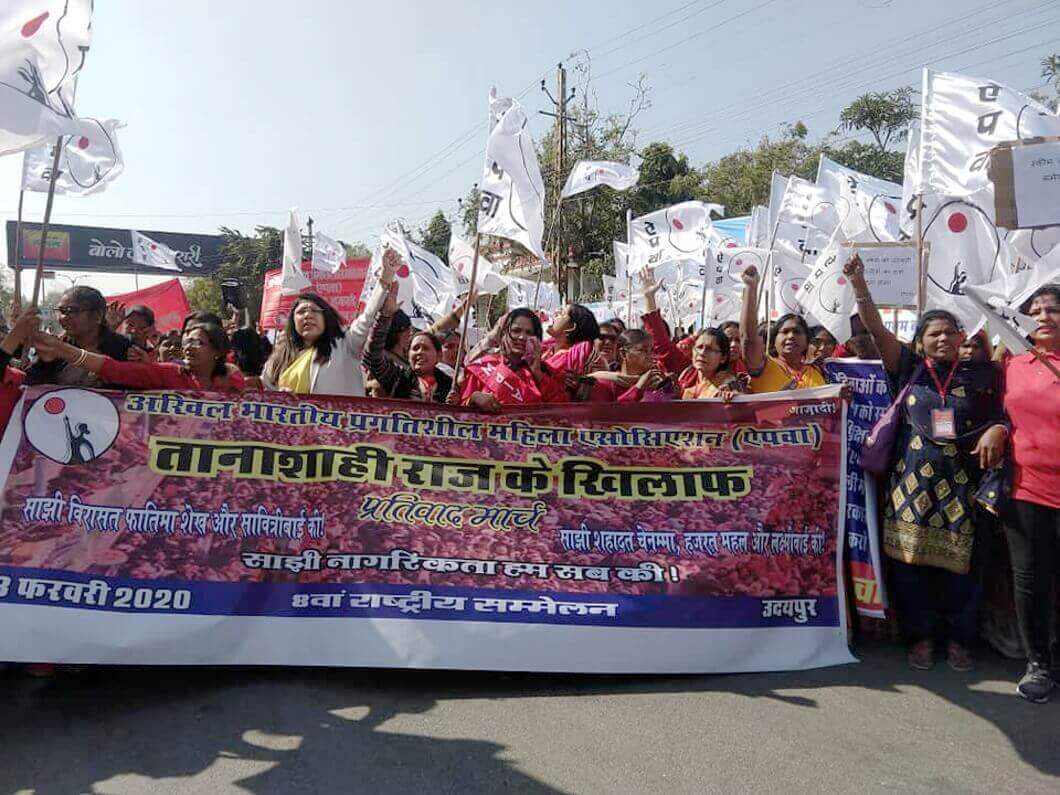