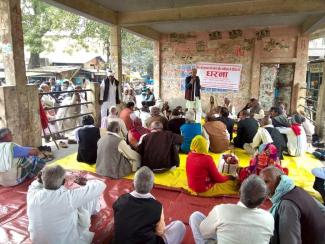 LEFT Parties visited Bilriyaganj in Azamgarh on 9 February 2020 where the police unleashed brutal atrocities on women on the night of 4-5 February. The team spoke to the injured, their families, residents living near the site of the brutality, and eyewitnesses and recorded their statements. The fact-finding team included CPIML State Standing Committee member Om Prakash Singh and advocates Sadchidanand Rai, Anil Kumar Rai, Birbal and Moti Yadav (CPI).

Speaking on behalf of the team, Om Prakash Singh said that some women were speaking at the anti-CAA dharna in Jauhar Ali Park on the night of 4-5 February; others were lying down and some were reading Namaz. Suddenly around 3.30 am the police came and attacked them. Eyewitnesses told the team that no slogans were being chanted at that time. Stones were also thrown by the police, and not by the protesters. Many people got hit by rubber bullets. Apart from the women admitted in hospital, there are many other women who are also injured but did not go to hospital out of fear. Actions like refusing to do a medical examination of the seriously injured, throwing minor children into jail, announcing a ‘reward’ for the capture of people whose name does not even occur in the FIR show that the entire Bilriyaganj incident is a result of the unholy nexus comprising the Yogi government, RSS/BJP and the state administration and the government’s declared policy of ‘revenge’. The team condemns this anti-democracy, brutal and repressive action and opposes it unequivocally. They said that a series of protests would be organized on the following issues: immediate release of arrested and falsely charged innocent persons; high level enquiry into the incident and punishment for the guilty police and administrative officials; stop repression and brutality on protests; protect the right to dissent and protest. Left Party leaders appealed to the people to participate in the dharna protest to be held at Azamgarh on 20 February against the brutalities and repression unleashed by the police in Bilriyaganj.