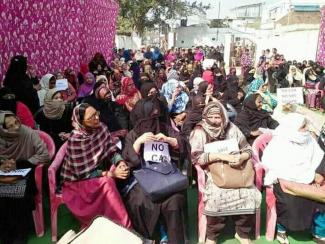 The police have registered cases against all of the above under IPC Sections 147, 188, 332, 333, 302, 506 and the 7th Criminal Law Amendment Act. The police have alleged that the meeting and the protest were held without permission and that one person from the police was beaten up.

CPIML District Secretary Debashish has said that the police allegations are false. He said that the meeting and the protest were totally peaceful and the City Magistrate himself ceme to the spot and accepted the memorandum. The cases were registered a day after the meeting had taken place. He stated that there was no misbehavior of any sort with any police personnel. This case has been slapped and arrests are being made with the objective of repressing and crushing peaceful protest.

More than one thousand people had participated in this anti-CAA protest organized at Sher Mohammed Mohalla in Pilibhit. This protest was organized by a citizens’ group and people from various parties had been invited. When Congress District President Harpreet Singh Chabba arrived with other Congress workers to participate in the meeting, they were stopped by the police from entering the venue.