Skip to main content
Commentary 26 February 2020
Population Control Is Anti Women, It Is Not Reproductive Justice 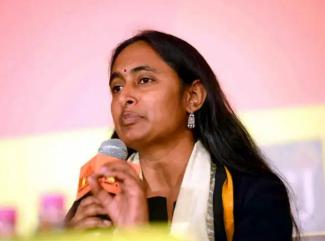 Note: Population Control is not about making safe birth control available to women so that they can make their own reproductive decisions. It is about allowing the State to treat women's bodies as baby producing machines, shame and punish women for giving birth, and even unleash mass violence in the form of mass sterilisation.

In his Independence Day speech in 2019, Prime Minister Modi announced a ‘population control’ campaign projecting small families as ‘patriotic’. Like the Beti Bachao and Swachh Bharat campaigns, this campaign, too, is ostensibly aimed at ‘nudging’ people to modify their social behaviour.

In his speech, Modi called for a campaign against what he called ‘uncontrolled population growth’. The campaign, he said, would focus on projecting parents with small families as responsible and patriotic. He said, ‘Before a child arrives in our family, we should think—have I prepared myself to fulfil the needs of the child? Or will I leave it dependent on society?’ This rhetoric shifts responsibility for the care (education, health, food and shelter) of children from the State and government to the parents. Deprivation is framed as parental neglect and irresponsibility. The ideology of ‘population control’ has always implied that it is poor families and poor nations that are expected to reproduce less. The fact is that population is not responsible for poverty. Wealth is not innocent of poverty. Poverty is produced by a system that exploits the poor to reward the rich. Poverty of nations is linked to a violent history of colonialism, where these nations were plundered and impoverished.

For long, the ‘population control’ policy of the Government of India, backed by international funding agencies, has resulted in extreme violence towards poor women in India. Between 2009 and 2012, fifteen women died every month due to botched sterilization operations in similar camps. The ‘population control’ campaign is now likely to boost violence on women’s bodies, and shame poor women for bearing ‘too many children’.

Quite apart from the tendency of ‘population control’ campaigns to inflict humiliation and violence on women, these campaigns are also likely to have a communal subtext. In Gujarat 2002, Modi had infamously called the relief camps for the pogrom-affected Muslims ‘baby-producing factories’. On 11 July 2019, just a month before his Independence Day speech as PM, his Cabinet minister Giriraj Singh addressed a rally in Delhi on World Population Day, demanding a Population Control Law.

At that rally, a song played from the dais, ‘Jansankhya  visphot se apni azaadi ko khatra hai/Hamko gaddaron ki badhti  aabaadi se khatra hai’ (Our independence is in danger from  population explosion/We are in danger from the rising  population of traitors). Singh made a speech calling for a law to prevent the decline in the population of Hindus and curb the growth of the Muslim population. Participants in the rally branded Muslims as unpatriotic and irresponsible for bearing too many children even if they were poor and worked as cobblers or at repairing bicycle punctures.

The ‘love jihad’ bogey is integrally tied to the myth that Muslims marry Hindu women to increase the population of Muslims.

Modi’s ‘population control’ campaign is likely to be another pretext to brand Muslims as unpatriotic and encourage discrimination and violence against them.