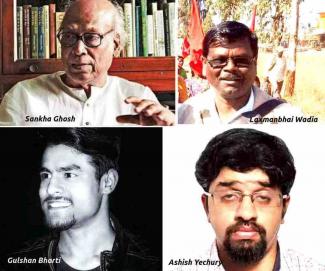 We bid farewell to poet Sankha Ghosh, who passed away from Covid-19 at the age of 89. Sankha Ghosh will always be remembered as one of the finest poets and literary critics in modern India, as well as a voice of conscience in the Bengali social and cultural sphere.

Comrade Dashrath Mahatia, senior CPIML kisan leader from Nighasan in Lakhimpur Kheri passed away on 9 April 2021. He was about 94 years old. Originally hailing from Fattepur village in Rudrapur Tehsil, Devaria District (then Gorakhour), Comrade Dashrath joined the Communist movement during the days of the freedom struggle under his uncle's ideological influence.Comrade Dashrath could remember the Chauri Chaura incident, which took place during his childhood.Comrade Dashrath Mahatia organized hundreds of landless people for 'dakhal' in the Khalla region of Nighasan. Later he had this land registered in the name of farmers through the Bhudan Samiti. He continued to play a leading role in the land 'dakhal' movement for thousands of landless families.

The entire region held Comrade Dashrath in the greatest of respect. He was the strong backbone of the farmers' movement and the party in Kheri District. His entire family is associated with the party and Kheri District Committee member Comrade Tapeshwari is his daughter-in-law. On receiving the news of his demise, hundreds of people including party activists paid silent tribute to him and the party flag was dedicated to him, after which they accompanied him on his final journey.

Comrade Laxmanbhai Chhaganbhai Wadia, 64 was a dedicated and popular leader from the Warli adivasi community of South Gujarat. This was very shocking to hear his passing away on 12 April. He developed breathing problem and chest congestion and owing to miserable medical infrastructure in Gujarat this wasn’t even possible to get him diagnosed properly. His demise is a big loss to us and to the struggles he was leading against land grab in Valsad, Navsari, Dang and Suraj regions. His leadership was decisive in preventing land grab of thousands of adivasis after the implementation of Forest Rights Act in 2006. Since then he has organized dozens of protest rallies and campaigns at Valsad, Umargam, Kaprada and other places to provide land rights to adivasis. He also relentlessly fought against private organized corporate land mafia who tried to grab Adivasi lands by illegal means. He had to pay a heavy price for his commitment and the struggles he led. He escaped attack on his life twice by mafia in collaboration with BJP goons. In one such attack he got injured. Nothing could stop him from leading the struggles from the frontline which certainly led to empowerment of Adivasi community in that region to newer heights. He fought against indiscriminate industrialization by GIDC being done at the cost of Adivasi lands and livelihoods and won struggles for potable water for the community, for wages as well as against the hold of private money lenders over Adivasi lives. Comrade Laxmanbhai Wadia participated in Una March held in Gujarat against atrocities on Dalits. He was instrumental in organizing rural labour and women in his district and organized many conferences and cadre meets for AIPWA and AIARLA. He had attended AIARLA National Conferences held in Bhubaneshwar, Patna and Jehanabad along with many delegates from his district. He was also very helpful in organizing adivasis in adjoining Palghar district of Maharashtra. After the brutal lockdown that was imposed last year this was Comrade Laxmanbhai who took initiative to send back home tens of thousands of Andhra Pradesh fishermen and their boats which got stranded near the coast of Gujarat. He personally supervised and ensured nearly 1100 boats reached home safely in their state. His father was a poor farm worker, and so he could not study beyond Std IV. Since childhood he helped support his family by working as bonded and farm labour. He toiled to educate his younger brother who later became the branch manager of a nationalized bank.In the 80s young Wadiabhai joined the Adivasi Sena against repression and loot by feudal lords and the land mafia, and became a prominent leader in that organization. He fought a long battle against grabbing of his ancestral land by GIDC and won in the end. Later, most top leaders of the Adivasi Sena joined the BJP. In 2005 Wadia joined the CPIML. In 2007 he was the party candidate from Umargaon constituency in the Assembly election. In the 2009 Lok Sabha election he was the party candidate from Valsad and polled 9,700 votes. In addition to being responsible for the Gujarat State leading team, he was also a member of the AIARLA National Executive and AICCTU National Council. Laxmanbhai Wadia was the delegate for the CPIML’s 9th and 10th party congresses. He struggled relentlessly for about four decades against the land mafia associated with BJP as well as Congress. During this period he was attacked numerous times, but he never accepted defeat. His death due to sudden illness is a sorrowful event for the party and for all who knew him.

Comrade Gulshan Bharti was a young CPIML member of the new generation, whose family, relatives, and Tola all are part of the CPIML legacy. He belonged to a dalit family from Kaup village in Gadahani Block. He leaves behind his teacher mother, farmer father and a sister and other family members including an uncle and grandfather, all of whom are active members of the party in all struggles against feudalism as well as today's fascist forces. Gulshan became a member of the party in 2015 and was active in our student organization AISA as well as at the forefront of social and party responsibilities. He played an important role in ration disbursement during the Lockdown, as a volunteer in the Gadahani Shaheen Bagh, Sadak-Par-School initiative, working tirelessly for the Agiaon election campaign, and looking after the social media front. Recently he played a leading role in the Vidhan Sabha march for education-health-employment. Comrade Gulshan was a B.Sc (Maths) Part 2 student at the Jagjivan College in Ara. He was a brilliant student and had passed Matric-Inter from Kshatriya High School in the 1st Division. His untimely death is an irreparable loss for the entire party. We stand with his family in this hour of sorrow.

CPIML extends the deepest condolences to CPIM General Secretary Comrade Sitaram Yechury and Indrani Mazumdar on the untimely loss of their son Ashish to Covid-19. We stand together with Comrades Sitaram and Indrani as well as all other family members and comrades who mourn Ashish's passing. In this very difficult hour, when the pandemic is affecting lakhs of Indian households and claiming thousands of lives every day, let us try and share the burden of this collective grief.