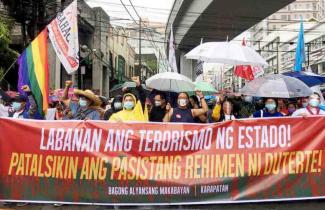 The political situation in the Philippines continue to deteriorate under the fascist regime of Rodrigo Duterte. In the midst of the COVID-19 pandemic, the government continues to terrorise the people through a spate of arrests and state sponsored violence. With the enactment of draconian Anti-Terrorism Act of 2020, Duterte’s regime has now embarked on a full scale witch-hunting (red-tagging) against labour rights and youth activists, peasant and indigenous leaders, and community organisations.

On April 15, 33-year old tricycle driver Pason, a member of urban poor group Kadamay and a member of Pasil Homeowners Association from Negros Island was assassinated. In a series of military operations between March 4-7, 2021, 9 labour and indigenous leaders and human rights activists were executed, just two days after Duterte’s call to “kill” and “finish off” all “communist rebels” in the country. In February this year, the police raided and arrested 19 children studying in a school for displaced indigenous children in the Central Philippine city of Cebu on charges of being rebels. Police and authorities regularly invoke Anti-terror laws to harass and threaten leaders and members of indigenous communities in their movement for protection of their land against big corporate dam and mining companies.

Furthermore, people’s initiatives amid the pandemic such as the Community Pantries, that look out for each other’s needs through solidarity efforts and mutual aid have also come under attack by the regime’s National Task Force to End Local Communist Armed Conflict and by the police. Despite the red tagging and threats, Community Pantries across the Philippines continue to stand strong and provide much needed support to the people who have been left to suffer and die of hunger by the Duterte government’s ne-oliberal and anti-people policies.

Since Duterte came to power in 2016, tens of thousands, including women, children, and members of people’s organisations have been summarily executed by government forces with absolute immunity under the pretext of ‘War on drugs’ and ‘counter-insurgency’.

CPI(ML) expresses solidarity with the people of Philippines and their struggle against the Duterte regime’s fascist repression!