Continuing Massacre of Democracy in Myanmar 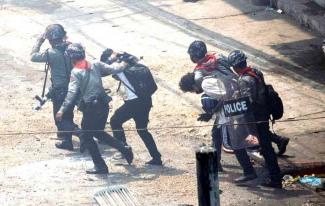 In February 2021, earlier this year, the military in Myanmar executed a coup, overturning the government led by Aung San Suu Kyi and the National League for Democracy. The coup was followed by an unprecedented and widespread resistance on the streets of Myanmar. In response, the military rulers have now unleashed a brutal crackdown against the protests. The military has launched ground attacks and air strikes. As per some reports emerging from Myanmar, more than 700 protestors are now killed. Another 3300 are in jail. An estimated 2,50,000 people have been displaced from their homes. People are fleeing for their lives to neighbouring countries, terrified and hiding in forests and desperately trying to find safe spaces.

Journalists, reporters and human rights activists who are documenting the assaults on democracy are being hounded, arrested, detained, jailed and killed. Thin Thin Aung, human rights activist and founder of the media house Mizzima, is one of these dissenters being hounded in Myanmar right now. She was picked up by the military in early April and is now being held in the notorious Yay Kyi Eaing interrogation centre.

This present moment in Myanmar is important for multiple reasons. Ethnic tensions between the Buddhist majority in the country and the Rohingya Muslims have unfortunately been an enduring feature in Myanmar, with the Rohingyas becoming the victims of a racially-motivated, genocidal campaign against them even under the rule of the democratically elected Aung San Suu Kyi. They have been denied the basic rights of citizenship, and have been brutally hounded out of the country. The present moment is important because we are seeing efforts to forge solidarities between protestors who are recognised as citizens of Myanmar, and the Rohingya minority.

Secondly, we are seeing dissenting voices against the latest coup from within the military too. According to a report, three-fourths of the security forces in Myanmar are opposed to the current crackdown on protestors. While this might not result in an overthrow of the coup, it surely points out the extent of unpopularity of the military rulers.

While there is some international outrage as well as domestic resistance to the coup, the military leaders in Myanmar seem hell-bent on continuing the regime of terror and intimidation. Military leader Min Aung Hlaing, who faces international sanctions for his role in military atrocities and the brutal crackdown on pro-democracy protesters, is defying protests and insisting on attending an international meeting to discuss solutions to the current crisis.

Role of the Modi Government

Even as the Myanmar military rulers are massacring the people, the government of India sent its military attaché to attend the Myanmar Armed Forces Day military parade on 27 March. It is well known that the Adani group, who owner is a close crony of Prime Minister Narendra Modi, has deeply entrenched business dealings with a company owned by the Myanmar military. It is difficult to avoid the inference that the Modi regime is prioritising Adani’s interests over the values of democracy and human rights.

The Modi government’s covert support of the military regime does not end there. The state government of Manipur issued a circular refusing food and shelter to refugees fleeing Myanmar, though it was later forced to withdraw the circular. Moreover, over the past few years, the government of India has been trying to deport Rohingya refugees to Myanmar where they face almost certain death at the hands of the military regime. The need of the hour is for all of us to stand by the principles of justice and liberty. We must join international efforts to demand safe shelter to refugees, including Rohingya refugees, fleeing massacre by the military in Myanmar.