Campaign to Save Historic Khudabakhsh Library in Patna 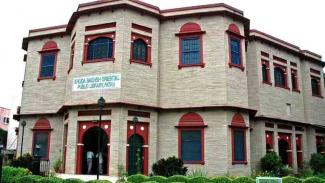 The Khudabakhsh Oriental Library is situated on the left side, ahead of Patna Medical College and Hospital (PMCH) on Ashok Rajpath between Kargil Chowk and NIT. This library has made a significant contribution to Bihar's education world and is renowned not only nationally but internationally as well. It is an important source for knowledge and understanding of history. Mahatma Gandhi as well as many Presidents, politicians and intellectuals have visited this library. It is also an important centre for historical studies.

This library is the biggest treasure-house of the intellectual and cultural heritage of South and Central Asia. It houses about 21000 manuscripts and a unique collection of 2.5 lakh printed books. Keeping in view the infinite historical and intellectual importance of its valuable collection, the Government of India had declared this library an institution of national importance through an Act of Parliament in 1960. This library contains manuscripts written on paper, palm leaf, deerskin, cloth and various other materials. It contains lakhs of printed books in German, French, Punjabi, Japanese and Russian as well as Arabic, Persian, Urdu, Hindi and English. It plays an important role in fulfilling the needs of students, youth and citizens for research work and Oriental Studies. There are two separate reading rooms for researchers and scholars and casual readers. In this situation, damaging or demolishing even a single inch of this library or its grounds is an assault on the entire world of education.

We are witnessing repeated attacks by the BJP-JDU government on educational-academic institutions. The attack on Khudabakhsh Library is the latest in this series. We demand that the government should desist from tampering with declared heritage buildings and damaging and destroying Khudabakhsh Oriental Library in the name of constructing flyovers.

A meeting of Patna's citizens was organized on 13 April 2021 under the call given by Bihar Vidhan Sabha Library Committee Chairman and CPIML MLA Sudama Prasad against the demolition of part of Khudabakhsh Library for construction of the Kargil Chowk-NIT flyover. The meeting at the Young Men's Institute in Patna was attended by well-known doctors, teachers, cultural activists, journalists, students and lovers of education. Among those who spoke on the occasion and participated in the discussion were Library Committee member and Paliganj MLA Sandeep Saurabh, Prof Bharti S Kumar, Dr Satyajit Singh, Dr PNP Pal, and many student-youth leaders, advocates, journalists, social activists, educationists, AIPF leaders and student union leaders.

MLA Sandeep Saurabh read out the draft of the letter to be written to the Chief Minister with details of the historical relevance of the library. The letter would also point out the danger to other important buildings like BN College and many Patna University departments, whereas other alternatives for construction of the flyover bridge are available.

The citizens' meet agreed on getting the letter signed by citizens and submitted without delay to the Chief Minister so that damage to historic buildings could be prevented. Since the Khudabakhsh Library is Bihar's only international heritage building, it was also agreed to send a letter in this context to UNESCO. The meeting decided to launch an all-round campaign to save the library. Along with writing to Bihar Governor, Chief Minister and others, protest initiatives were also discussed. A Save Khudabakhsh Library Save Heritage Buildings Sangharsh Morcha was formed with AIPF leader Dr Kamlesh Sharma as Convener.