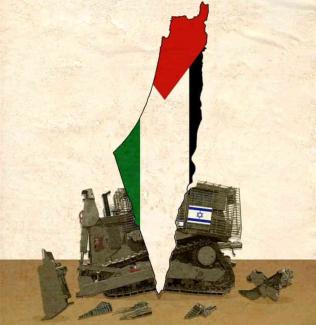 As we enter the month of May, another year has been reduced from the lifespan of brutal Israeli occupation of Palestine. One more year has passed in West Bank and Gaza Strip, with tens of thousands of Palestinians - old and young - holding high the glorious banner of resistance in the face of the brutal Israeli oppression.

The oppression against Palestinians didn’t end there, instead, the ‘Israeli state’ established one of the most brutal and industrialised system of persecution witnessed by the world since World War II. A whole nationality – it’s people, heritage, and culture - was caged in their own land. But what the oppressive apparatus couldn’t cage was the revolutionary spirit of resistance of the Palestinian people that continues to fight the Israeli military occupation and also provides inspiration to people’s movements across the world.

In March 2018, on the Land Day anniversary the Palestinian people in Gaza launched a new wave of resistance movements known as the Great March of Return, that continued for more than a year. Tens of thousands of Palestinians in Gaza demanding the right of return and end to the siege and occupation marched towards the border fence put up by the Israeli military. What unfolded in this Great March of Return was visible to the whole world, unarmed Palestinians – men and women, young and old – were massacred and maimed by Israeli forces.

The largest massacre happened on 14 May 2018, coinciding with the illegal move by the United States of America recognizing Jerusalem as the capital of Israel. Israeli soldiers shot dead 60 Palestinians and injured 1200 people on this fateful day. Many injured were shot in their legs with explosive ‘butterfly’ bullets, crippling them for life. And yet none of this dampened the spirit indomitable spirit of Palestinian resistance.

Oppression, the Pandemic, and Everyday Life in Occupied Palestine

The COVID-19 pandemic has further exacerbated the worsening situation in occupied Palestinian territories of West Bank and Gaza. In the backdrop of the massive concrete wall running along the perimeter of West Bank and the 14 year long Israeli land-air-sea blockade of the Gaza strip, people in these occupied territories are faced with daily raids and kidnappings by the Israeli military. For Israel, these occupied territories are the open laboratories for testing its new weapons technologies and tools of mass surveillance and control.

In West Bank, people continue to resist daily raids, kidnappings, demolition of Palestinian homes and expansion of illegal Israeli settlement by Israeli forces. Recently, in March 2021, Israeli forces opened fire on a protest against an illegal Israeli settlement and killed 42 year old Atef Yussef Hanaysheh. Facing corruption charges and an electoral crisis, Israeli Prime Minister, Benjamin Netanyahu, with support from then US President Donald Trump in 2019 had announced the plans to further expand ‘Israeli sovereignty’ over 30% areas of of West Bank, particularly in the Jordan Valley. The proposed annexation will mostly be in Area C of the occupied West Bank, where most of the illegal Israeli settlements have been built. This annexation plan of Netanyahu coincided with Trump’s infamous ‘Deal of the Century’ that aimed at giving 60% of West Bank territories to Israel in exchange for Palestinian statehood.

In Gaza, the humanitarian situation is unimaginable, with people in the besieged coastal strip living with less than 12 hours of electricity every day. The three brutal wars on Gaza by Israel have already destroyed vital public infrastructure, crippling hospitals, as well as water and sanitation plants. Due to the blockade, healthcare in Gaza faces a severe shortage of medical supplies, including lifesaving drugs and ICU beds.

Faced with an acute shortage of tertiary medical treatment, many Palestinians are forced to approach hospitals in Israel, but have to go through an inhuman approval process. Many patients are forced to travel without companions because their exit permits are rejected by Israel. With the COVID 19 pandemic, and suspension of cooperation between the Palestinian Authority (PA) and the Israeli state in the background of Israel’s new annexation plans, many applications for exit permits were declined by Israel leaving critical patients from Palestine without crucial healthcare.

Amid the pandemic, Israel has devised a new tool of oppression against Palestinians - vaccine apartheid. While Israel is being portrayed as the world leader in its vaccination drive, Arabs in Israel and Palestinians in occupied regions were initially denied access to the vaccine. Only after a long delay, Israel provided a very limited number of vaccine doses to the Palestinian Authority. For the rest, Palestinians have to rely on donations. Under International Law and the Fourth Geneva Convention, Israel as an occupying power is obligated to provide all measures to provide health services and combat the spread of contagious diseases and epidemics.

“The disparity in access to vaccines - with Palestinians having very little access and Israel leading the world in vaccine coverage - is a direct result of the apartheid and colonial aspects that characterize its occupation,” said international law expert, Nuriya Oswald of the Al Mezan Center for Human Rights.1

Palestinian political prisoners imprisoned in Israeli occupation jail continue to be at the receiving end of both, the Coronavirus pandemic and Israeli brutality. According to recent reports, there are 4450 Palestinians, including around 40 women and 140 children lodged in Israeli prisons. Most of them were simply put behind jails for protesting or on suspicion of protesting against Israeli occupation of Palestine. Many of them are forced into solitary confinement and subjected to physical and psychological torture. Palestinian prisoners are denied proper healthcare despite the raging Coronavirus infecting around 368 of them. More than 500 prisoners suffer from various diseases and comorbidities, making them more vulnerable.

Palestinians in Israeli jail continue to resist Israeli occupation and brutality through hunger strikes as a tool of protest. Last year, 32 Palestinian political prisoners went on a 100 day long successful hunger strike in Israel’s Ofer Prison demanding the release of the seriously ill inmate Maher al-Akhras.  The strike ended after al-Akhras was released on November 26.

The Palestinian Boycott, Divestment and Sanctions (BDS) against Israel continues to expand into a global movement despite attempts by Israel and pro-Israeli countries and lobbyists to vilify and sabotage the movement. Modeled after the anti-apartheid movement of South Africa, the BDS movement aims to end “international support for Israel's oppression of Palestinians and pressure Israel to comply with international law”.

In the past few years, the BDS movement has been successful in pressing countries, organizations and companies across the globe to withdraw from activities or contracts that are in contravention to international law and directly/indirectly complicit in Israeli oppression of Palestinians. In April last year, after a sustained movement the United Nations Development Programme (UNDP) office in Jordan announced “that it would not be renewing its contract with G4S, a private security corporation with a lengthy history of involvement in Israel’s crimes.”  In mid 2016, the BDS campaign was successful in ensuring the withdrawal of South Africa based retail chain Woolworths from its purchasing activities of Israeli products from occupied territories.

In India, BDS is engaging with people’s movements and civil societies to resist the Israeli investment in the Indian agriculture sector, while whitewashing its crimes against Palestinian farmers. “The interventions in Indian agriculture play out by creating the myth of Israel ‘seeing’ India from its agrarian crisis—a notion both patently wrong and racist. Crucially, such myths serves Israel’s PR machinery by serving as cover for its war crimes, occupation, and apartheid against Palestinians—a veneer for the everyday injustices meted out to Palestinian farmers” said Apoorva Gautam, BDS South Asia Coordinator.2

BDS and other people’s initiatives of global solidarity continue to strengthen the fight against Israeli oppression at a time when ‘old friends’ especially many countries in the Arab League have turned complicit in the Israeli oppression and crimes against humanity. In 2019, Israeli and United Arab States (UAE) with the assistance from the US normalised ties and also embarked on military cooperation. Today, UAE along with the US and Israel are attempting to sabotage the United Nations Relief and Works Agency for Palestine Refugees in the Near East (UNRWA) that provides much needed humanitarian projects, including schools in occupied Palestinian territories.

While expressing solidarity with the cause of Palestinian freedom and the resistance against occupation, the 10th Party Congress of CPIML held in 2018, reiterated the importance of BDS movement:

Despite Israel’s ceaseless attempts to discredit its critics by falsely conflating anti-Zionism with anti-Semitism, the Boycott, Divestment and Sanctions (BDS) movement is growing in strength internationally and there is now very widespread recognition that Israel, like pre-1994 South Africa, is an apartheid state which must be strenuously opposed by all anti-imperialist and anti-racist forces. Considering India’s growing strategic ties with Israel, it is important for us in India to strengthen the BDS movement.

Renewed Call to Strengthen The Fight for Palestinian Freedom

On May 22, areas under Palestinian Authority (PA) will be holding elections for the Palestinian Legislative Council (PLC). The PLC only has authority in Area A under the Oslo Peace Accord of 1993-95 between Palestinian Liberation Organization (PLO) and Israel, while in Area B, PLC only has power over civilian matters, while security is under Israeli military. Area C is under full control of Israel.

But the long-delayed election (last election was held in 2006) has not generated much enthusiasm among the Palestinian population. According to political observers, the main reason is the failure of Oslo accord, from which PA and PLC were created. Many members of the Palestinian movement considered the Accord- termed as ‘historic’ by international community- was destined to fail as it was disadvantageous for the cause of Palestinian Liberation.  Today, the critics argue that Oslo Accord is only on paper. The frequent annexation of Palestinian land (under the Accord) by Israel and expansion of illegal Israeli settlement has made the ‘objective’ of the 1993 agreement void.

The limited impact of Palestinian Authority to further the cause resistance against Israeli oppression, and the extensive collaborations made by PA with Israel in the fields of security, intelligence and economy against Palestinians has created a sense of alienation among the people of occupied territories.

Against the backdrop of increasing Israeli oppression and annexations, there had been renewed calls for another Intifada (uprising). The Great March of Return symbolized this aspiration of the Palestinian people. The everyday resistance against occupation by millions of Palestinians- in streets, universities, refugee camps, Israeli jails and abroad- continue to challenge the military might of the oppressor. The final Intifada, the last nail in the coffin of Israeli military occupation is nearing with the passing of each day. Like every oppression in the history, this will also fall.

“The Palestinian cause is not a cause for Palestinians only, but a cause for every revolutionary, wherever he is, as a cause of the exploited and oppressed masses in our era.”

- Ghassan Kanafani (8 April 1937- 8 July 1972), a Palestinian author and a leading member of the Popular Front for the Liberation of Palestine (PFLP).