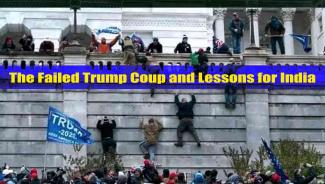 As Americans continue to deal with the aftermath of the failed coup attempt by the Trump Presidency, warning bells ring loud for the whole world as the threat to parliamentary democracy becomes a universal companion of the growing crisis of global capitalism, especially with the pandemic currently haunting the world for the second successive year.

Ever since the counting of votes began, Trump had been trying to stop the count, complaining of the election being stolen. But he failed in these attempts and the US is now all set to usher in Joe Biden as the country’s next President. Even as Congress was going through the formal process of certifying the elections, Trump incited his supporters to storm the Congress building. Trump has all along been unpredictable during the four years of his despotic Presidency, but the insurrection was clearly beyond the anticipation of the US and the world.

As we make sense of the emerging details of the aborted coup, it becomes increasingly clear that the storming was far from sudden and spontaneous, it was meticulously planned and sponsored from within. For decades, the United States has been destabilising governments across the world, engineering coups and genocides, inflicting wars, fomenting civil wars, and effecting regime changes by all possible means, only to prop up dictators and camouflage it as democracy. In light of the January 6 coup we can say that the chickens of US sponsored ‘export of democracy’ have started coming home to roost.

The fact that the Trump Presidency could come to power, and go on to unleash a powerful racist frenzy within America by stoking the fire of Islamophobia and the fear of immigrants, and then secure the support of almost half of America even as Trump lost his comeback bid in the face of massive Covid19 casualties and utter crisis of governance, shows that the US cannot dismiss the January 6 aborted coup as a nightmare. The rot has gone far too deep and there can be no quick and easy overcoming of the disastrous legacy of the Trump Presidency.

The rise of the Trump Presidency brought into the open the racism and white supremacy structurally embedded in American society. It also brought to the fore the sharp conflict between the interests of ever-growing corporate aggression and the basic tenets of democracy, public accountability and rule of law. Unchecked privatisation in the economic arena is pushing us towards relentless centralisation of power and privatisation of governance, thereby hollowing out democratic institutions and procedures. The Trump Presidency not only represented the horrific spectre of a Hitler reincarnate, it also gave us a glimpse of unbridled corporate rule.

The aborted Trump coup has attracted global outrage and condemnation. Internationally, governments have called for a peaceful and orderly change of guard in the US in accordance with the election outcome. Even Narendra Modi, who behaved as the strongest votary of Trump, going to the extent of campaigning for a second term for Trump in his shared public meetings with Trump during the ‘Howdy Modi’ and ‘Namaste Trump’ programmes, has tweeted to express his ‘distress’. But the strong bond between Modi bhakts and hardcore Trump supporters was on display once again during the failed insurrection, with several Modi supporters identified among the crowd.

In the history of India’s parliamentary democracy, we can see stark parallels with the 6 January 2021 U.S. Capitol raid. On 7 November 1966 tens of thousands of supporters of the Bhartiya Jan Sangh, the predecessor of the BJP, had stormed India’s parliament to demand a ban on cow slaughter. Twenty-six years later, supporters of the BJP had demolished the Babri Masjid in broad daylight in open defiance of the Supreme Court. While the 1966 coup was quelled by the police, in 1992 the police remained mute spectators. And with the BJP emerging as the dominant political force, now the demolition brigade has been acquitted and rewarded with a verdict by the Supreme Court ordering the construction of a temple in place of the demolished mosque. The Sangh brigade has now perfected the art of mob lynching to silence and kill people while the BJP has mastered the art of buying out opposition MLAs and MPs and bypassing and bulldozing legislatures with ordinances and fraudulently passed laws.

We in India can therefore ignore the lessons from America’s attempted coup only at our own peril. When farm laws are passed in India without any voting in Parliament, when the government’s policy-making wing complains of ‘too much democracy’ in response to the farmers’ demand for repeal of these draconian and disastrous laws, and when dominant sections of the media dub the farmers anti-national for opposing the government, we know we are still dealing with an extremely critical situation in India. While standing by the pro-democracy forces within US political institutions in their battle to end and overcome the disastrous Trump legacy, we in India must fight hard to save Indian democracy from a fascist corporate takeover.