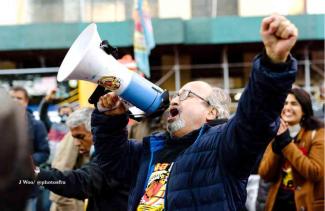 New York taxi drivers, most of whom are immigrants from the Asian and African continents, went on a hunger strike for two weeks to protest a system of predatory lending that had left drivers crippled by debt.

Bankers and broker had artificially inflated the prices of taxi driving permits (called “medallions”) which meant that drivers incurred big loans to get the permits. The New York Taxi Workers Alliance (NYTWA) launched a hunger strike to demand loan restructuring backed by the city administration. Finally the two-week long hunger strike was called off when the NYTWA announced that it had won a city administration-backed guarantee that taxi drivers’ medallion loans would be restructured to a maximum of $170,000, lowering individual drivers’ payments to a maximum of $1,122 per month.