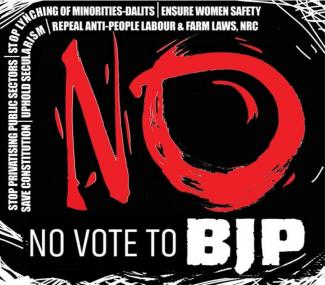 The debate in Bengal over the identification of the principal enemy has elicited a response from the CPI(M)’s mouthpiece. Let us examine the claims made by People’s Democracy.

It has been claimed that “Unlike what the CPI(ML) alleges, the CPI(M) and the Left Front have not equated the BJP and the TMC.  There is no underestimation of the threat posed by the BJP in West Bengal”. However its own campaign does not bear this distinction out. The term ‘Bijemool’ has specifically been developed by the CPI(M) in order to categorise this equation, and has been openly used by CPI(M) activists. What explains this divergence between PD’s assertion and the reality of CPI(M)’s campaign? The slogan Ekushey Ram Chabbishey Bam is well known, and has been a part of BJP’s strategic attempts at weaning away CPI(M) voters, but such slogans have been overlooked by the CPI(M) itself. Is this not an indication of the fact that CPI(M) is underestimating the threat of the BJP in Bengal?

PD goes on to further argue “The CPI(ML) is underestimating the depth of popular discontent against the TMC regime. This is a state assembly election. If the Left Front will not firmly, vigorously and unequivocally fight for the defeat of the TMC government, a large part of this popular discontent will be garnered by the BJP”. There is no denying that the BJP has gained a lot of ground precisely due to TMC’s corruption and terror, in fact CPI(ML)’s resolution on the national situation in the 2018 party congress highlights this. However, competing with the BJP for anti-TMC votes is a losing strategy altogether for the left. BJP has weaponised this competition against the Left itself given its superior money-muscle power and its control over the union government and central forces. Over the past two years, tens if not hundreds of news channels have sprung up in West Bengal, funded by dark money aimed at propping up the BJP. The BJP isn’t just another opposition party attempting to win over a state. West Bengal holds ideological significance for the BJP as a surviving bastion of anti-fascism. While BJP has rarely targeted the TMC for its corruption or anti-democratic practices, it has principally focused on TMC’s alleged ‘appeasement’ of Muslims.

Considering this election an ‘assembly election’ undermines the significance of this election. This election is a referendum on the BJP’s attempt to enforce the NRC-CAA-NPR in Bengal as well as the ‘national’ character of the ongoing Kisan Movement.

PD argues that the TMC is unlike RJD or SP, but fails to provide any class analysis to substantiate its assertion. Perhaps it should do well to remember the violence unleashed upon the cadres of CPI(ML) in Bihar during the 1980s and 1990s. CPI(M)’s own allies in the Congress had unleashed violent repression of adivasis during UPA I & II. In fact much like TMC’s corruption has opened up space for the BJP, it was the corruption and crony capitalism of UPA I & II that allowed for the rise of the BJP in our time. Once again this is not to suggest that the CPI(M) should ally with the TMC, but rather to highlight the fact that PD’s own logic doesn’t hold in this case.

The LF had allied with the Congress in 2016, when BJP’s rise in Bengal was not as apparent as today, instead of emphasizing on a broader left unity. Then too, the people found the logic of the alliance as unpalatable, and resulted in the LF losing the position of principal opposition to the Congress.

The people in Bengal are becoming aware of the BJP’s unholy designs with every passing day, and the election is increasingly becoming a battle against the BJP’s attempt to wrest Bengal. The ‘No Vote to BJP’ campaign has even involved political sections that have traditionally stood against any electoral participation. In both urban and rural areas these campaigns have found support from a wide cross-section of society. The uncertainty created by the NRC-CAA-NPR process has also made people increasingly aware of the threat posed by the BJP and it is necessary that BJP become unviable as a political party in West Bengal.

The CPI(M) has impeccable ‘anti-TMC’ credentials that can only be questioned by the intellectually dishonest. Especially when BJP is openly embracing corrupt turncoats from the TMC without having their commitment to fight against TMC questioned. It must therefore be realised that this election is not being fought on the questions posed by TMC but rather the ones posed by BJP. The political party that will be able to furnish its ‘anti-fascist’ credentials the best will be the one that will become relevant in Bengal.

Mamata Banerjee’s thanking of CPI(ML) for highlighting the threat posed by the BJP has led to a lot of ruffled feathers in the CPI(M). Yet few questions were raised when Amit Shah thanked CPI(M) activists after the 2019 results. In reality it hardly matters who thanked whom. What matters is that PD assumes that a campaign to defeat the BJP is automatically in support of TMC! Is this an admission that CPI(M) will not present a serious fight against the BJP?