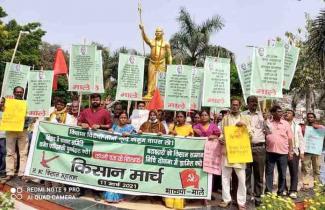 On the birth anniversary of great farmers’ leader Swami Sahajananda Saraswati who led the movement against British Company Raj and the zamindari system, a kisan march was organized in Patna on 11 March under the banners of CPIML and All India Kisan Mahasabha.

The march culminated in a meeting at Swami Sahajananda Park where tributes were paid to him and a pledge was taken to carry forward his legacy. The march reverberated with slogans for repeal of the three farm laws, legal status for MSP, reinstatement of APMC Act in Bihar and inclusion of small farmers and sharecroppers in PM Kisan Samman Yojana.

Addressing the Mahapanchayat, Dipankar Bhattacharya said that Swami Sahajananda's journey started with fighting the Brahmin community to achieve social status for Bhumihars, but he soon realized that the range of social oppression was much bigger and dalits and backward castes were much more oppressed. He saw the misery of farmers and recognized that the zamindars were not the real farmers. He organized the Bihar Pradesh Kisan Sabha in 1929. The movement he led soon became a national movement and he was elected the first National President of the All India Kisan Sabha in 1936.

Sahajanand declared the fight for freedom from British rule for India and from zamindari for farmers would be fought simultaneously. His ideology was the Left ideology and he said that the red flag was the most reliable flag for achieving freedom. Today also the red flag is at centre stage in the ongoing farmers' movement at the Delhi borders.

Sahajananda worked for the Left Coordination Committee but soon after Independence he passed away in 1950 and left the country bereft of a great leader.

The farmers' movement in the 1970s took its inspiration from Sahajananda. When IPF won in many constituencies in the 1989 elections in Bihar, people felt that Sahajananda's legacy had come back to life. Today also we are committed to carrying forward his great legacy. He cannot be constrained within caste boundaries and will be remembered as one of history's greatest farmer leaders.

The Modi government forced through farm laws during the Lockdown, against which the ongoing farmers' movement has completed 100 days. Modi Ji says some people are 'Andolanjivis'; yes, we are proud to be Andolanjivis who fight for just rights, unlike the people who were informers during the freedom struggle and who kow-tow to Adani-Ambani today.

He appealed to the Mahapanchayat to ensure a huge participation of the poor of Bihar in the nationwide farmers' struggle.

At the conclusion of the Mahapanchayat a resolution was passed to appeal for the resounding success of the Vidhan Sabha march on 18 March and Bharat Bandh on 26 March.

7 Kisan Yatras were flagged off from Bihta which travelled to 35 Districts of Bihar between 11 and 15 March. During the yatras they organized more than 300 big and small street meetings, public meetings and village farmers' meetings, and also invited farmers and workers to participate in the Mahapanchayat. The yatras covered about 5000 kms in Bihar and spoke directly about the farm laws to about one lakh farmers in 2000 villages.

Various demands of farmers came to light during the yatras in which they want immediate intervention. Some of these demands are: repairing the Son canal system in Shahbad and Magadh region; provision for water to reach the lower banks of canals; completion of the long-awaited Indrapuri Reservoir project. Maize producing farmers in Eastern Bihar were deeply concerned about maize not being procured at MSP and food grains being used to manufacture ethanol. Farmers in Seemanchal-Mithilanchal want a permanent solution to the recurring flood problem. Sugarcane farmers in Champaran raised the issue of payment of arrears which are due to them in lakhs of rupees. The demand for restarting sugar mills was also forcefully voiced. Farmers expressed grave worrues about the 3 farm laws and criticized the Modi government for its stubborn attitude.

Landless farmers and sharecroppers also participated in the kisan yatras and expressed their worry that if the government stops procuring food grains how will the PDS system continue to function? How will the poor get rations? They understood perfectly well that ending the mandi system will affect not just farmers but also the poor.

Thousands of farmers and workers participated in the Kisan-Mazdoor Mahapanchayat organized at Gate Public Library in Patna on 18 March 2021 under the joint banners of CPIML, AIKM and AIARLA to demand repeal of the three farm laws, resolution against them to be passed in the Bihar Assembly, legal status for MSP, reinstatement of APMC Act, inclusion of landless and sharecropping farmers in PM Kisan Samman Yojana and other demands.

Main speaker at the Mahapanchayat CPIML General Secretary Dipankar Bhattacharya said that the Bihar government has perpetrated the worst betrayal against the farmers of Bihar by ending the APMC Act in 2006 and pushing farmers into a vicious cycle of misery. The issue of MSP is an issue not just for big farmers but for small farmers also who are suffering for lack of procurement at MSP. The farmers of Bihar get the lowest price for their crops.

Comrade Dipankar said that the farmers' issue will be the main issue in the forthcoming elections in various States. He appealed to people to vote against BJP and defeat them.

Farm leader Gurnam Singh Bhakhi from Punjab Kisan Union who came to attend the Mahapanchayat from Tikri Border in Delhi, said that farmers have been firmly camping on the Delhi borders despite all obstructions and oppression by the government. This fight against the three laws is a fight for the food security of the entire country. It is a matter of life and death for common people across the country.

Navkiran Natt the editor of the popular news bulletin being published from the protest sites in Delhi, Trolley Times, and youth leader also addressed the Mahapanchayat where she said that women are participating in the farmers' movement as farmers in their own right. Women account for 50% of farming work but their ownership of land is only 2%. This fight belongs to each and every citizen, as it is a fight for the right to food. She expressed the hope that a tranche of farmers from Bihar would soon join the farmers sitting on the Delhi borders.

The Mahapanchayat paid tributes to Swami Sahajananda Saraswati, leader of the historic farmers' struggles in Bihar and all martyrs of the ongoing farmers' movement. Cultural team Hirawal presented a song in honour of the martyrs.

All Mahagathbandhan parties of Bihar and many intellectuals associated with the farmers' movement were invited to participate in this Mahapanchayat.

Thousands of farmers and farm workers attended it with a strong resolve to further intensify the movement in Bihar.

Resolutions passed at the Farmer-Worker Mahapanchayat

1. The three anti-farmer anti-national farm laws passed by the Modi government will not only enslave our agriculture to corporate companies, but will also end food security, PDS, and nutrition schemes. The worst affected will be the poor and the working class. Thousands of farmers and workers who have come from all corners of Bihar to attend this Mahapanchayat in Patna demand the repeal of these anti-farm laws and a resolution to be passed against them in the Bihar Assembly.

3. This Mahapanchayat fully supports the Bharat Bandh called on 26 March 2021 by the Sanyukt Kisan Morcha and calls for making it a historic bandh. The farmers' movement that started in Shaheed Bhagat Singh's Punjab is finding fresh momentum and extension in Bihar, the land of kisan leaders like Swami Sahajananda Saraswati and Ramnaresh Ram.

4. Immediately on coming to power in 2006 the Nitish government ended the APMC Act, snatched away government Mandis from farmers and handed them over to the market. If ending government Mandis were indeed to be beneficial for farmers, the condition of farmers in Bihar should be the best in the country. But the reality is exactly the opposite. Nowhere in Bihar does the farmer get MSP. Farmers here are forced to sell their paddy at Rs 900-1000 per quintal to middlemen and traders. The dire condition of agriculture results in continuous migration from the State. Gradually Vyapar Mandal, FCI, SFC and other institutions have been made weak and inactive. This Mahapanchayat demands legal status for MSP, renewal of Agriculture Market Committees and reinstatement of AFMC Act.

6. Along with Railways, aviation, insurance and agriculture the government is now playing with privatization of public banks. Privatization is a huge attack on our job opportunities and social security. Banks have played an important role in the country's economic development and by privatizing public banks farmers, students, youth and the poor will be deprived of loans and they will become slaves to private owners. This Mahapanchayat demands ending of this privatization process and strengthening public institutions.

7. This Mahapanchayat supports the demand for jobs with dignity for youth, end of contract and outsourcing for ASHA-Anganwadi-Rasoiya-teachers and all scheme workers and supports their movement for permanent jobs, demands repeal of anti-worker amendments to labour laws, and appeals to all forces of struggle to come together and build a strong unity.

8. The continuing deaths due to starvation are extremely worrisome. 5 persons from one family in Supoul committed suicide due to financial straits. Despite being 103rd out of 117 countries in the Global Hunger Index, the Modi government's manufacture of non-food substances like ethanol from food grains is nothing but a conspiracy to kill the people who are battling hunger. This Mahapanchayat demands that the Bihar government should not implement such anti-poor hunger-enhancing policies in Bihar.

9. This Mahapanchayat strongly opposes the Bihar government's conspiracies to curb social media, issue a diktat denying government jobs and contracts to persons who participate in protests, and crush the basic right to protest across Bihar including capital Patna.

10. The real liquor mafia is sitting right inside the lap of the government, but it is the poor who are being sentenced to death through the draconian prohibition law. This Mahapanchayat demands the removal of liquor trade tainted Minister Ramsurat Rai and immediate release of the lakhs of innocent poor thrown into jail in the name of the Prohibition Act.