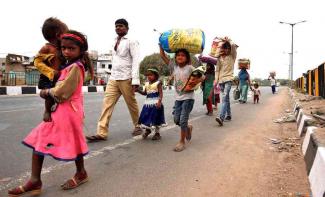 A year ago on March 24 2020, the Modi regime, in the name of curbing the Covid-19 pandemic, imposed a sudden and total three-week lockdown with a mere four-hour warning. The lockdown lasted nine weeks. Millions of migrant workers, left stranded, walked home, suffering starvation, heat waves, accidents, and many dying along the way. For India’s economy, already staggering under the Modi regime’s 2016 demonetisation blow, the draconian lockdown was a virtual death blow.

A year later, where does India stand? Was the lockdown essential to control the spread of the Covid-19 virus? How did the lockdown impact India’s poor? India’s middle class? India’s richest? Liberation takes a quick look.

A report by the India Forum observes:

“When the lockdown was finally lifted, infections and deaths started to rise sharply, with India in a few months becoming the country with the second largest number of infections. It also turned out that neither the central nor the state governments had used the lockdown to strengthen public health facilities on an emergency footing to cope with the spurt in infections that was to follow, though that was one of the unstated justifications for the lockdown. ...

“In hindsight, the lockdown only created dangerous incubation spots in the cities, and as workers scrambled to the safety of their homes with the relaxation of lockdown, they became unwitting carriers of the virus into small towns and villages. And finally, when the lockdown began to weigh down dangerously on the economy and wearily on people’s morale, the Centre simply receded, passing on the responsibility to the states to cope with the aftermath, including in the poorly provisioned hinterland.”

“As of mid-October 2020, India suffered the highest number of Covid-19 deaths per million population in a select group of Asian countries (see image.)”

32 Million People Pushed Out of Middle Class, Into Poverty

The US-based Pew Research Centre found recently that the number of Indians in the middle class, or those earning between $10 and $20 a day, shrank by about 32 million, compared with the number that could have been reached in the absence of a pandemic.

A year into the pandemic, the numbers of those in the middle class has shrunk to 66 million, down a third from a pre-pandemic estimate of 99 million, it added. The number of poor people, with incomes of $2 or less each day, has gone up by 75 million as the recession brought by the virus clawed back years of progress.

A news report, speaking to migrant workers in Delhi-NCR, found that “A year after the lockdown, jobs are not only harder to find, they pay less.” One worker said he only worked three months in 2020, and now having found a job, is “slowly trying to pay back Rs 35,000 in rent dues for his Rs 4,500-a-month single room in Sagarpur.” He has sent his two daughters home to his village in West Bengal, where they have dropped out of school.

The same worker said that the salaries being offered now were well below the around Rs 18,000 minimum wage for skilled workers set by the Delhi government. From Rs 12,000 a month for 12 hours of work, which is what he was earning earlier, he says companies were offering Rs 10,000 for the same, and workers were desperate enough to accept even Rs 7000 or Rs 8000.

16-year-old Reena from Jhansi is now forced to earn through domestic work in Noida. She had to drop out of school when her sister lost her job during the lockdown, and the family could not pay her school registration fees.

14-year-old Anjana has also had to drop out of school and take up domestic work, because her daily wage construction worker mother is unable to find regular work and cannot pay school fees.

The wealth of the Modi’s crony CEOs grew in the pandemic year: Gautam Adani’s wealth more than doubled to $32 billion; Mukesh Ambani’s grew by a quarter to $75 billion.

India’s top 100 billionaires had been able to preserve their wealth during the year and “fewer billionaires had seen an erosion of their wealth than in 2019”. Yet, the Modi Government refused to hike taxation for the rich – even as India’s poor and middle class continue to suffer unemployment, deprivation, hunger, and crises of education and health. In April 2020, the income tax department rejected a report by a team of 50 young Indian Revenue Services (IRS) officers suggesting the government to hike income tax rates for super-rich and imposing a Covid-relief cess of 4% for those earning above Rs 4 lakh.

According to Oxfam’s Inequality Report, India’s top 100 billionaires saw their fortunes increase by Rs 12.97 trillion — enough money to give every one of the 138 million poorest Indians a cheque for Rs 94,045 each. In stark contrast, 170,000 people lost their jobs every hour in the month of April 2020, the report points out. In fact, the increase in wealth of the top 11 billionaires of India during the pandemic could sustain the NREGS scheme for 10 years or the health ministry for 10 years.

India Among The Ten Least Happy Nations of the World

India ranked 139 out of 149 countries in the World Happiness Report 2021, released by the UN Sustainable Development Solutions Network.