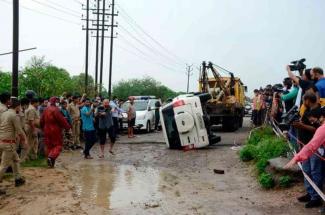 The Vikas Dubey episode marks more than yet another entry in the lengthening list of ‘encounter’ killings in Uttar Pradesh. It illustrates key principles of the dominant model of statecraft in today’s India and explains some important basics of what is popularly called the criminal-police-politician nexus. It points to a new level of criminalization of politics, and crisis and collapse of constitutional governance.

First, we had the stunning ambush of a police raiding team in a Kanpur village on the intervening night of 2-3 July, which made Vikas Dubey a household name beyond the badlands of Uttar Pradesh. The scale and manner of the ambush demolished several myths about the Yogi Adityanath regime of Uttar Pradesh. The Yogi regime of UP has adopted ‘encounter killings’ as a state policy and showcases them as the biggest achievement of the government. In 2019, soon after the Supreme Court termed the UP encounters a “very serious issue”, the UP government paraded them as Republic Day publicity.

The very fact that even after more than five thousand encounters including more than a hundred encounter killings under Adityanath’s stewardship, a criminal like Vikas Dubey could ambush a police team exposes the utter hollowness of the claimed ‘efficacy’ of this Encounter Raj. In fact, apart from the utter illegality of the serial encounter killings, commentators have also pointed to the skewed social nature of the encounters. A typical encounter victim is more likely to be a helpless innocent citizen belonging to Dalits and other oppressed castes or the Muslim community, with cases posthumously added to justify the killing, and certainly not one of those hardened ‘most wanted’ criminals who continue to operate freely just as Vikas Dubey was doing till his surrender and eventual elimination in an alleged encounter.

The UP government is so smug about its encounter policy that it did not at all try to hide the obviously fake nature of the encounter script dished out by the police to ‘explain’ Dubey’s death. The same smugness could be seen in the composition of the special investigation team (SIT) set up to probe the killing. DIG J. Ravinder Goud, part of the three-member SIT, is himself charged with a fake encounter of a young medicine dealer Mukul Gupta of Bareilly in 2007. Despite an order issued by the Allahabad High Court on August 26, 2014 for a CBI probe into the encounter, successive UP governments have not sanctioned the prosecution of the charge-sheeted policemen and in April 2015, Mukul Gupta’s parents who had petitioned the High Court for the CBI probe were also murdered. With such an approach to investigation, no wonder all the encounter killings in UP have till now been found justified. Now the government has announced a one-man judicial probe, but with the ambush being clubbed with the encounter, the probe will obviously be more into the former than the latter.

It goes without saying that criminals like Vikas Dubey draw their strength from close links with both politicians and police. In fact, Vikas Dubey’s political links with the BJP, and previously with the BSP, have been quite well known. A photo of Vikas Dubey with UP Law Minister Brajesh Pathak has now gone viral on social media. Indeed, when we talk about criminalization of politics or the criminal-police-politician nexus, we must never forget the commanding role that politics plays in the nexus.

In a different political milieu Yogi Adityanath himself might well be in jail for all the serious criminal cases that he as Chief Minister has now exempted himself from. While his government always flaunts its ‘encounter’ figures, it should also be noted that it has stopped almost all cases pertaining to the Muzaffarnagar communal carnage. Well known BJP leaders like MPs Sanjeev Balyan and Bharatendra Singh, MLAs Sangeet Som and Umesh Malik, Minister Suresh Rana and Sadhvi Prachi have all benefited from this official amnesty. We have seen the same thing happen earlier in Gujarat or happening, for that matter, right now in Delhi where BJP leaders like Kapil Mishra are being spared despite the strongest of evidence.

If criminals prove dispensable beyond a point, as has been demonstrated by the treatment finally meted out to Vikas Dubey, who many believe was tricked into surrendering in Madhya Pradesh before being eliminated in Uttar Pradesh, police officials too are treated differently depending on their utility and loyalty to the political rulers. In the case of Inspector Subodh Kumar Singh who was lynched in Bulandshahar, we can already see the accused are all out on bail and have been duly felicitated by the BJP. The system has different standards for the Vanzaras and the Davinder Singhs who continue to be rewarded and protected even after being caught on the wrong foot than for the likes of Sanjiv Bhatt who languishes in jail or Amitabh Kumar Das (the Bihar cadre IPS who exposed powerful Bihar politicians for their links with Ranveer Sena or with mafia dons) who has been subjected to compulsory early retirement.

The BJP used to describe Bihar under the RJD or Uttar Pradesh under the SP as ‘jungle raj’. For long they have been using the metaphor of ‘crime’ or criminalization of politics as a defining feature to discredit the post-Mandal political rise of backward castes. Today, in both Bihar and Uttar Pradesh we can see a huge escalation of crime and terror under the rule of BJP/NDA. The self-congratulatory claims of ‘good governance’ stand completely demolished on the ground even though the dominant media continues to underplay the real extent and nature of the ongoing criminalization, driven primarily by feudal-communal forces blessed by the Sangh brigade and targeted against oppressed social groups and opposition political forces. In Uttar Pradesh, this feudal-communal criminalization and the state policy of encounter killings are posing a lethal challenge to the very notion of rule of law and the edifice of justice. We have seen the ominous implications of this pattern in Gujarat. If Uttar Pradesh and Bihar too follow this Gujarat model, rule of law will disintegrate into institutionalized lawlessness and anarchy.