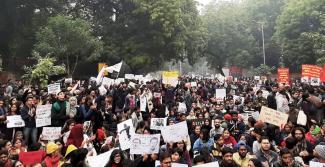 THE very next day after the CAA was passed, CPIML observed 10 December, International Human Rights Day, as an all India protest day against NPR, NRC, and CAA. There were spontaneous protests all over India, especially among students and youth, on 9th and 10th December, where copies of the CAA were burnt.

On December 9, the day CAB was introduced and passed by the Lok Sabha, a anti-NRC anti-CAB rally was held in Kolkata by the Joint Forum against NRC which was addressed by CPIML Politburo member Kavita Krishnan, former IAS officer Kannan Gopinathan who had resigned in protest against removal of special status of Kashmir in Article 370 and is campagning now against all India NRC, and ex-JNUSU President Kanhiya Kumar among others. 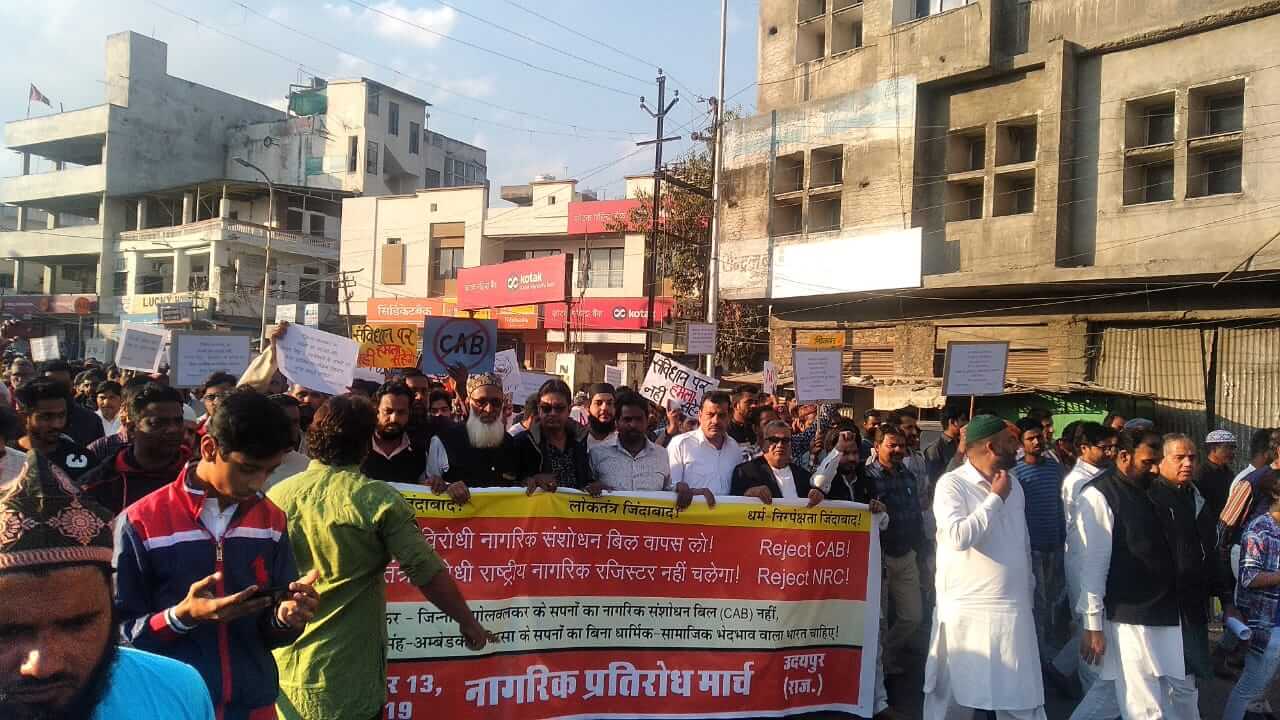 A torchlight procession was held against CAB-NRC-NPR at Konnagar of Hooghly where copies of CAA were burnt. A huge gathering of people in Kadapa town of Andhra Pradesh protested terming NRC as anti-poor and CAA as anti-Constitution. In Siliguri Revolutionary Youth Association and AISA held a rally. A protest was held in Kakinada of AP opposing NRC and CAA. A huge rally was held in Dehradun of Uttarakhand which pledged to save the syncretic and pluralistic polity and culture of India from the communal CAA-NRC conspiracy. In Garhwal University, Shrinagar, AISA organized a protest march. Massive protests were organized in Jaipur and Udaipur in Rajasthan. 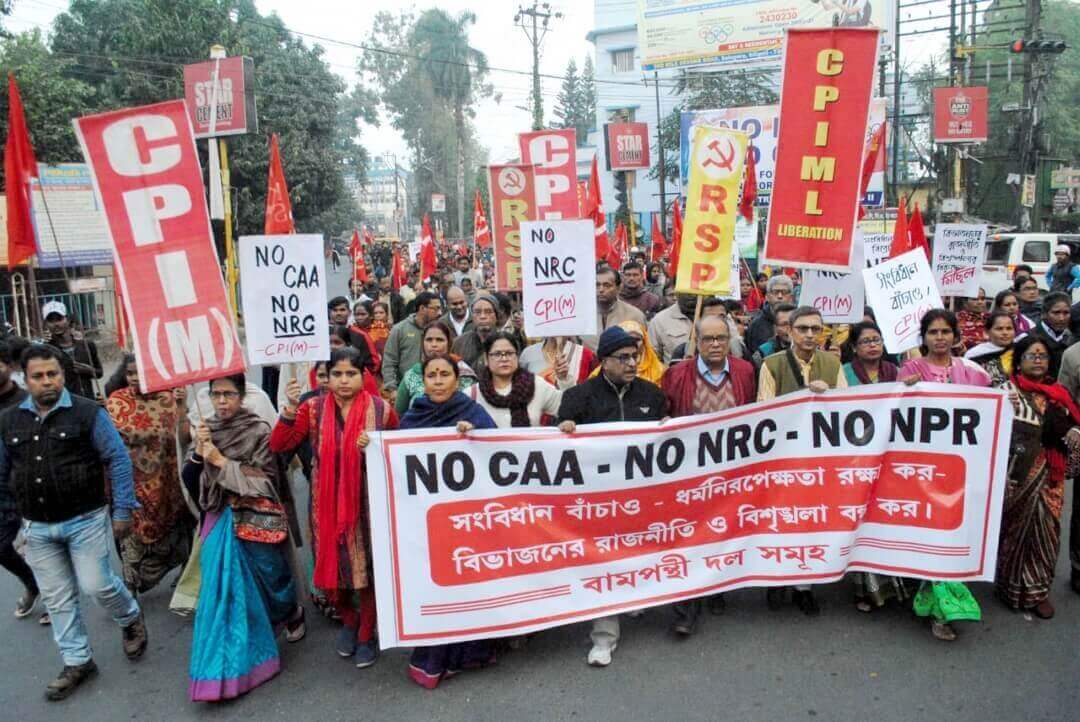 Thousands of citizens assembled at the India Gate on 16 December to take oath of defending the Constitution. Protests broke out in Seelampur-Jafrabad area of Delhi on 17 December which again faced a brutal lathi charge by police. The highway remained blocked for hours due to this protest.

A protest meeting and march against CAA-NRC was organized on 18 December at Haryana in Mewat from Nooh to Ghasi Heda. Speakers at the meeting recollected that on 19 December 1947 Mahatma Gandhi had come to Ghasi Heda and assured the people of Mewat that they would be given full protection in India.

Five left parties including CPIML, CPIM, CPI, AIFB and RSP gave a call for all India protests on 19 December.

The movement intensified following the brutal police attack on Jamia students. Students of JNU, Delhi University and Ambedkar University all rushed to the Delhi Police Headquarters the same night to protest against the crackdown and now every university and institute of higher education is joining in. 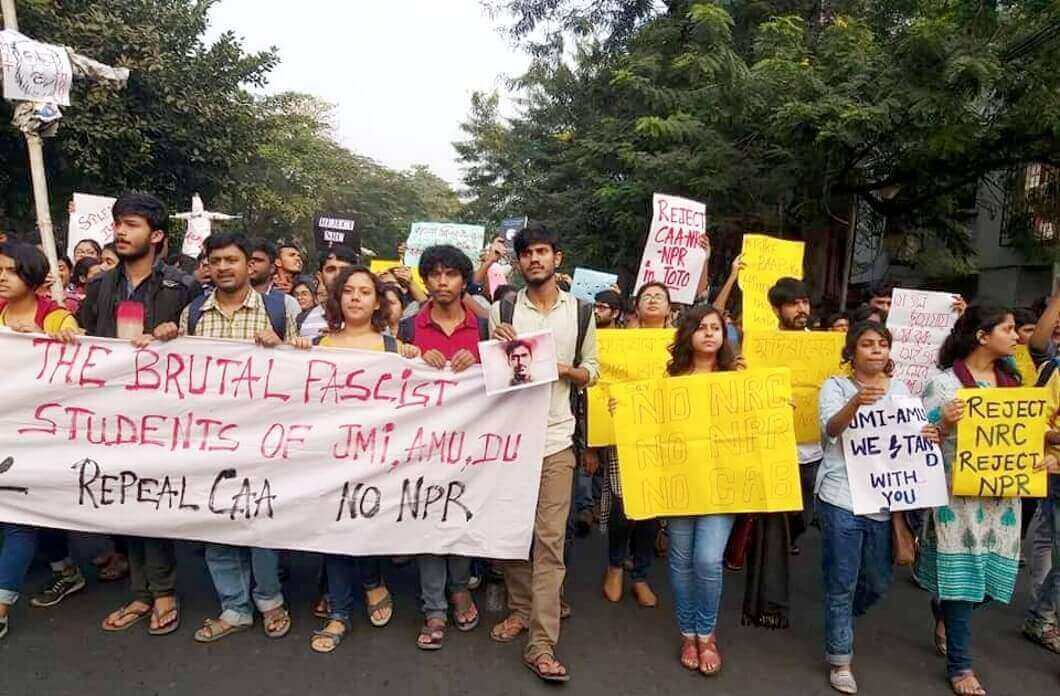 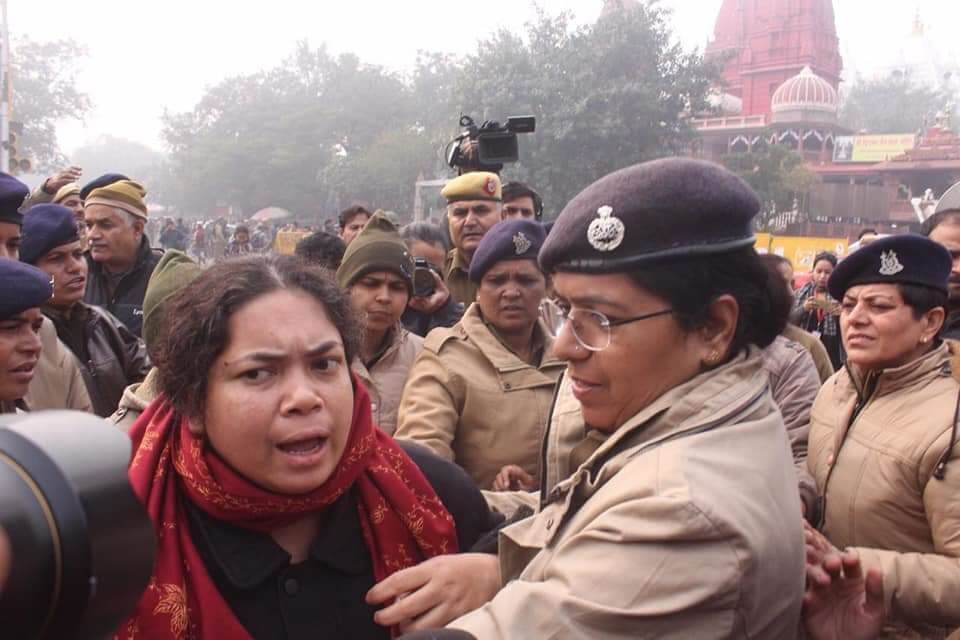 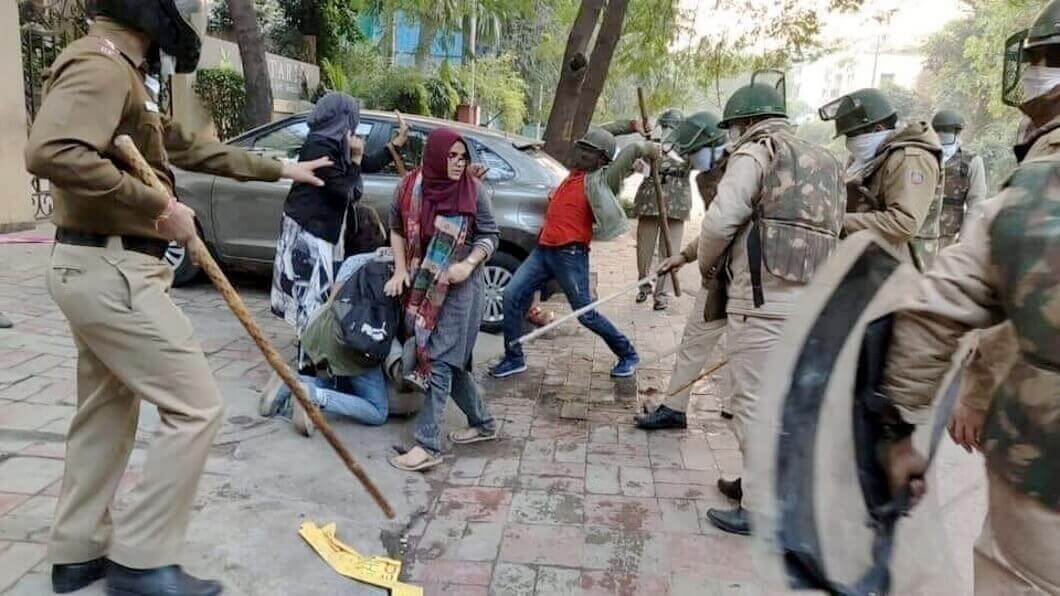 Police Killings in BJP Ruled States and Arrests of Activists

So far, nearly two dozen killings of activists have been reported, mostly by police bullets and maximum number is from UP.

Activist Akhil Gogoi in Assam has been arrested and charged with sedition and UAPA for resisting the CAA. Bhim Army leader Chandrashekhar Azad Raavan has been arrested in Delhi. Large numbers of students have been arrested or named in FIRs, while courts have refused anticipatory bail for them. 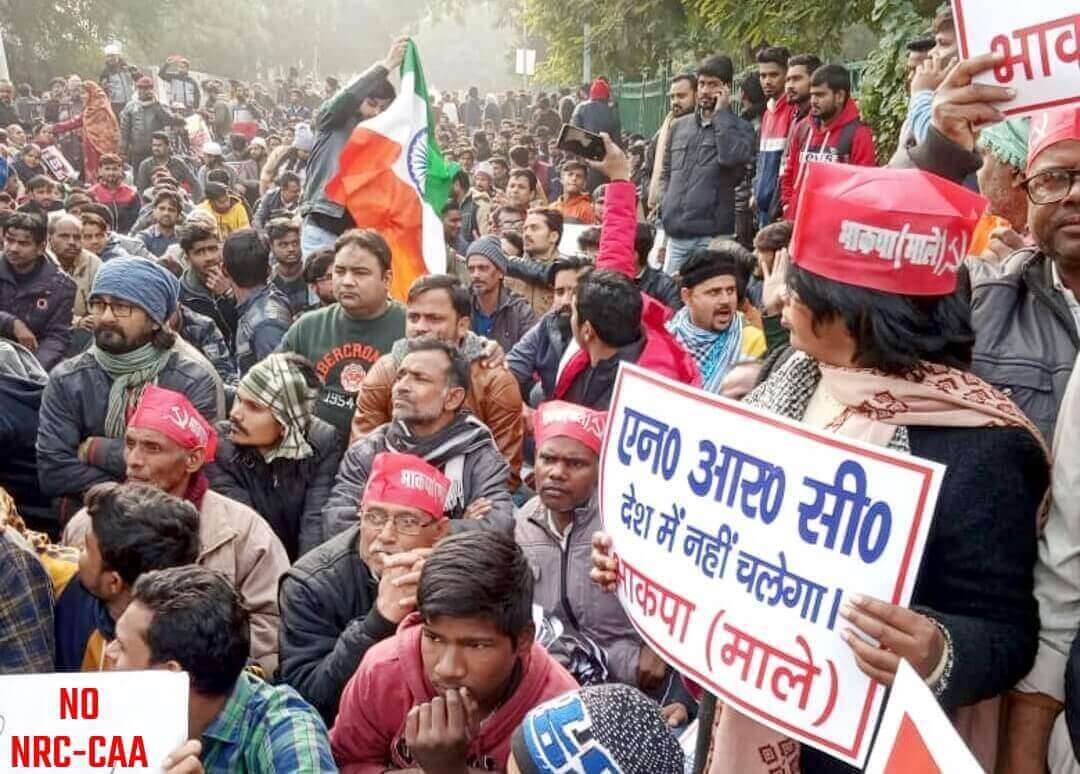 All over UP, leading activists including SR Darapuri, Md Shoaib of Rihai Manch, Manish Sharma, CC Member of CPIML, veteran employees' leader Shri Prakash Rai, AISA activists Ashutosh, Vivek, Vikram, Rajesh, Nitesh, Arjun Kharwar and others have been arrested. In the PM’s constituency alone, 76 people have been arrested. They were picked up while assembling peacefully and were charged with serious criminal sections of rioting and arson. Police have issued “wanted” notices for AIPWA UP Secretary Kusum Verma and other activists in Varanasi newspapers. Similar wanted notices have also been issued by UP police in other towns. The police is collecting photographs publiced in media reports and CCTV footage for this purpose.

The Internet shutdown is becoming another tool of suppression by the BJP Gov as in most of Assam and many districts of West Bengal and Uttar Pradesh internet remained closed. Even Metro stations were closed in Delhi though nothing could stop the protesters and thousands still managed to reach to the Police Headquarters at ITO in the night of Dec 15 against the brutalities let loose in the Jamia campus by Delhi Police and RSS goons in civil cloths wearing police’s bullet proof vests illegally assisted the former in brutalising innocent students, just like storm troopers of Hitler’s days! 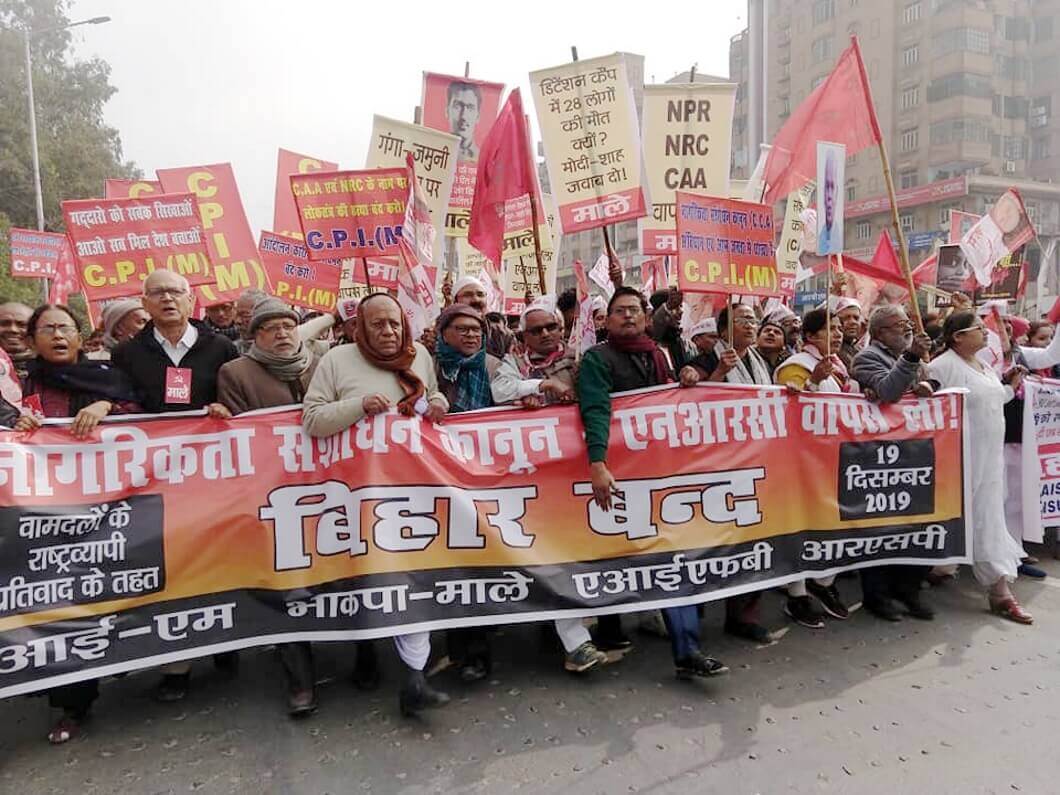 On 19 December, India observed the 92nd anniversary of the shared martyrdom and shared legacy of three of India's brave freedom fighters - Ashfaqulla Khan, Ramprasad Bismil and Roshan Singh, with massive protests celebrating the shared legacy of anti colonial struggle, martyrdom, and citizenship.On 19 December, responding to a call by Left parties, Bihar observed a Bandh against NPR, NRC, and CAA. Bihar Bandh against CAA and NRC

The Bihar Bandh against CAA and NRC started on 19 December 2019 as part of the National Protest called by Left parties. Braving the intense cold, people came out in huge numbers to raise their voice against the Modi-Shah autocracy. Rail and road traffic was obstructed at various places in the State. 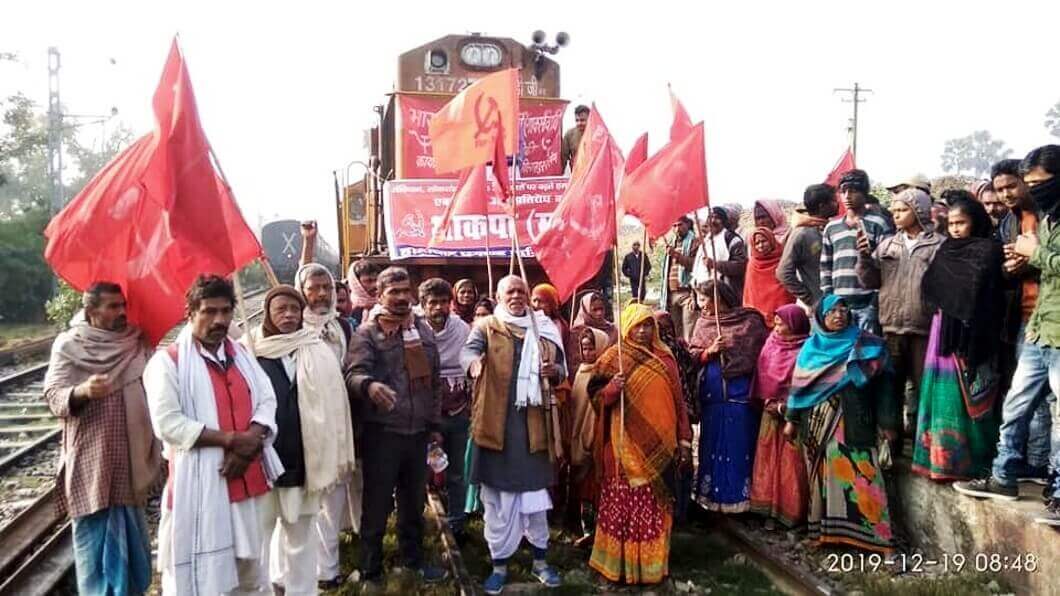 The Janaki Express and Jainagar-Patna Kamal Ganga Inter-City Express were obstructed in the early morning by CPIML activists at Darbhanga. Local trains were blocked at Islampur in Nalanda. At Jehanabad, thousands of ML activists swarmed the tracks and blocked the Bhabhua-Patna Inter-City and 5 PG passenger trains. The Patna-Gaya main road was also jammed. Most shops remained closed. The Bandh was led by Srinivas Sharma, Rambali Singh Yadav and leaders from CPI and CPIM. 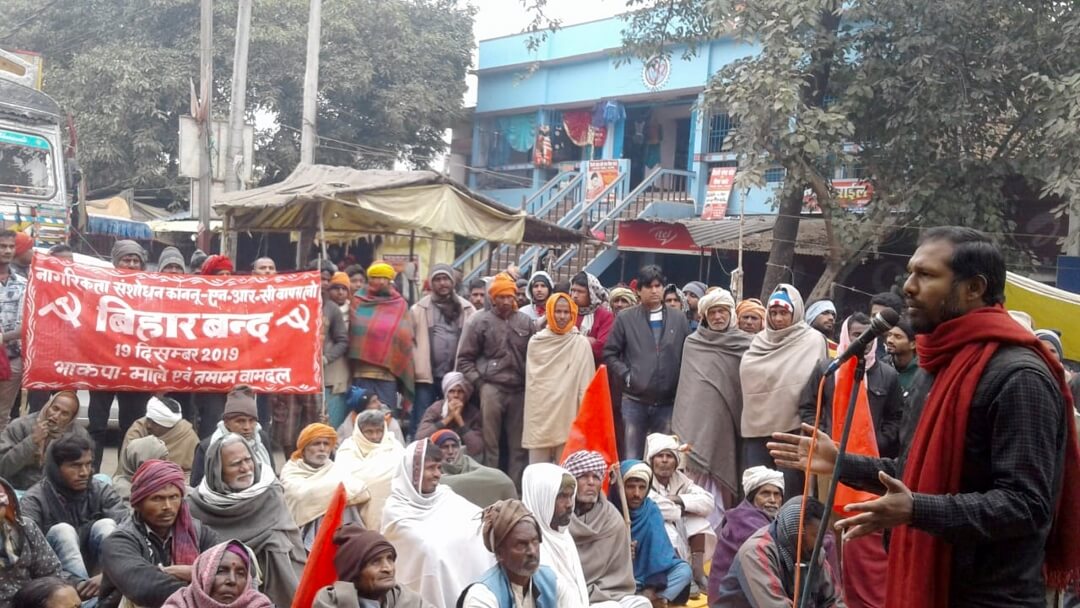 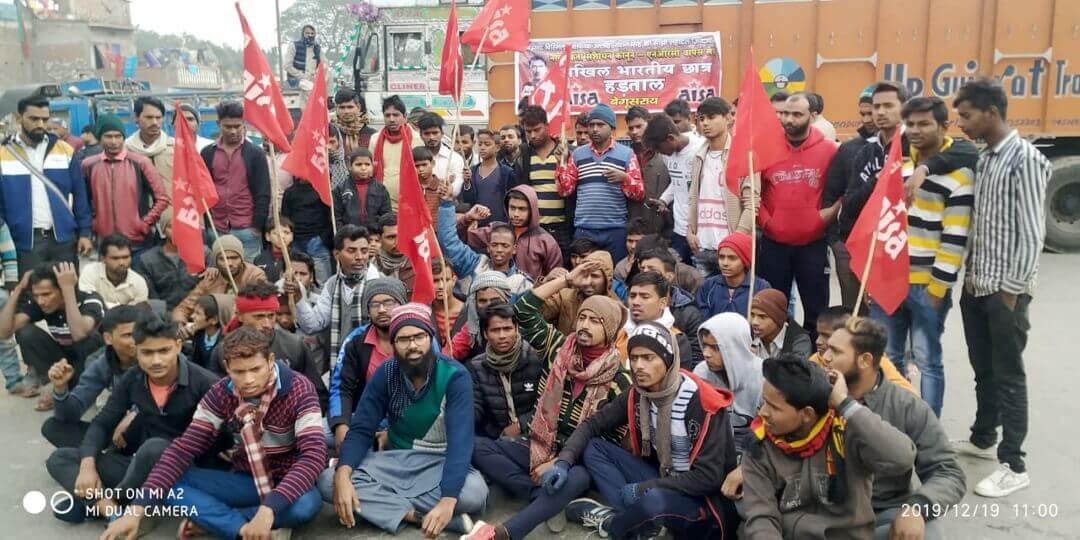 While a massive rally against CAA-NRC was organized from Gandhi Maidan in Patna, Patna University students’ organizations ensured the resounding success of the Bandh in the University area. The issues of women’s safety and eviction of the poor were also raised. Led by Kunal, Meena Tiwari, Dhirendra Jha and leaders from CPI, CPIM, Forward Bloc, RSP and Hindustani Awam Morcha, the rally marched through various places in the city and culminated in a meeting at the Dak Bangla Chowk addressed by Kanhaiya Kumar and other leaders. The Bandh was made a huge success by the participation of AISA, AISF, SFI, Bhim Army and many other student organizations. Leaders speaking at the rally said that the people of India would not tolerate this attack by Modi-Shah on India and our Constitution and would fight till this hate-mongering divisive government is defeated. They called on workers and farmers, including rural workers to make the workers-farmers strike on 8 January 2020 a resounding success.

Hundreds of protesters courted arrest across the State at Nawada and other Districts during the anti-CAA-NRC Bandh. NH 28 and 31 were fully jammed at Muzaffarpur and Beguserai. AISA led students in the total Bandh at Magadh University. Thousands of people came out on the streets to ensure the Bandh at Nalanda. Gayaghat-Muzaffarpur and Bandara-Muzaffarpur NH were blocked. 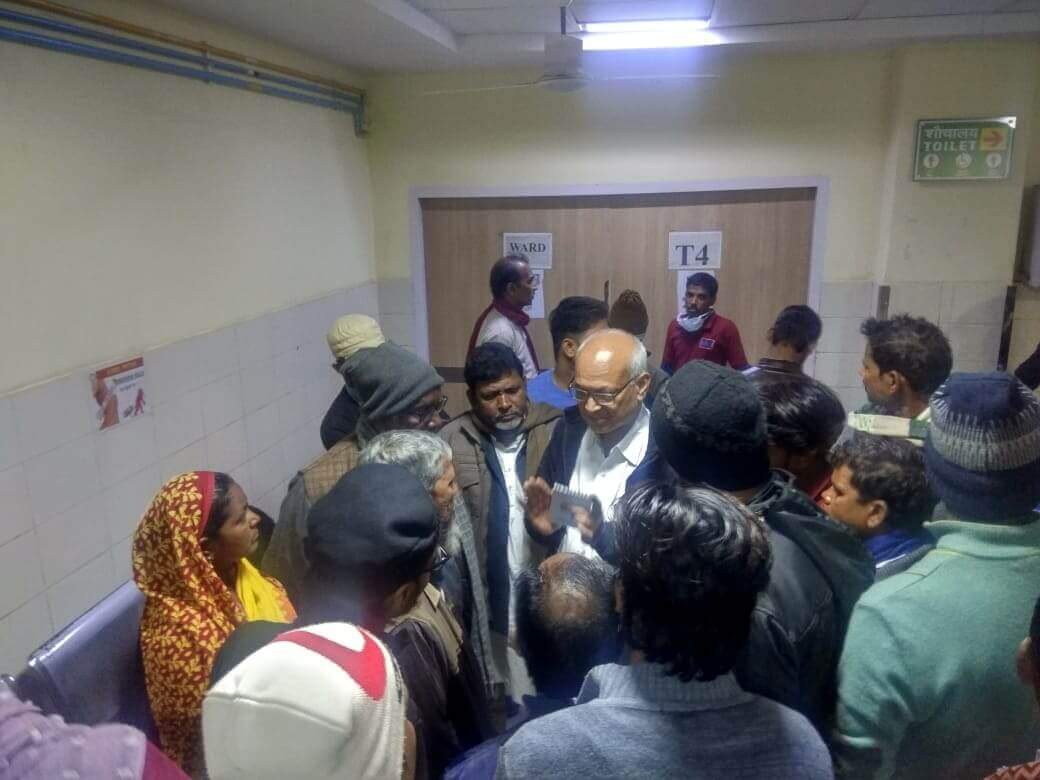 Bihar again observed a Bandh called by the RJD and supported by CPIML on 21 December. On that day, communal forces unleashed violence at Phulwarisharif in A high level CPIML team enquired into the incident at Phulwarisharif and found that the hand of RSS-Bajrang Dal was responsible for the incident. They tried to disrupt the Bandh by firing and stone-pelting, injuring many protesters. The rioters deliberately targeted Muslim protesters. Of the injured, 10 are being treated at AIIMS Patna and one at PMCH. Speaking to the victims’ families and other locals, the team found that the incident at Tamtam Padav occurred near the Saraswati Shishu Mandir, an RSS-dominated area. The administration accepted that they were aware of the danger of rioting, and yet they took no proper precautions. They told the team that they have prepared a list of 100 people of whom 23 Hindus and 17 Muslims have been arrested. The team said that instead of arresting the masterminds behind the attack, the administration is raiding the villages of minorities. The team members met the injured, including Mohd Shahnawaz, Mohd Ashraf, Mohd Alam, Mohd Sabir Alam, Mohd Faizal, MOhd Anas, Mohd Tausif, Mohd Akbar, and Shailendra Kumar.

The CPIML demanded action against the erring local administrative officials, stopping raids on minority community, arresting the ring leaders of the attack, and Rs 2 lakhs each as compensation for the injured. 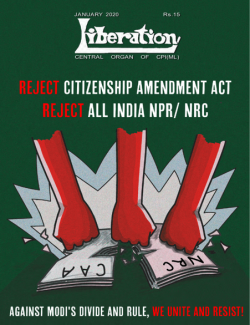 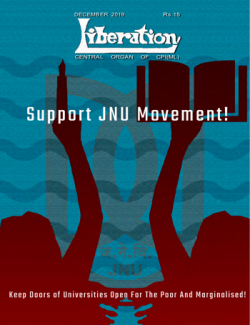