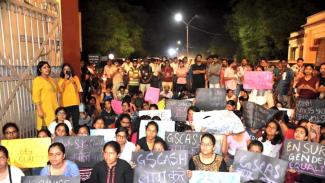 WOMEN students of BHU have risen up in protest against the administrative shielding of Prof SK Chaubey who has been found guilty of sexually harassing women students. The complaints committee against sexual harassment enquired into allegations that the professor made obscene gestures and vulgar comments to women students during an academic trip to Odisha last year, and found him guilty. The committee recommended stern action. But the university’s executive council reinstated the professor after a mere eight-month suspension, sparking the fresh wave of protests by women students.

This is the reality of the propaganda of 'Beti Bachao, Beti Padhao' under the present government. In the PM's own constituency, in a central university like BHU women are not free and safe.

AISA and AIPWA expressed solidarity with the BHU movement, demanding that