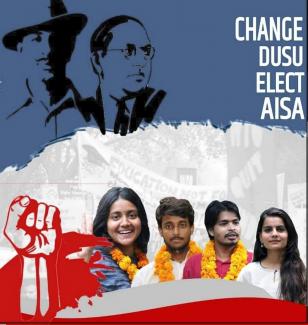 IN the DUSU polls this year, AISA emerged even stronger than before - with a significant increase in votes since last year, both in absolute term and percentage!

In an unequal playing ground for common students, in contrast with the government-backed ABVP that contested the election with huge money power, common students have strengthened their support for AISA.

ABVP managed to win the post of President, VP and Joint Secretary, while NSUI won the Secretary post.

Last year, AISA had contested together with the AAP student wing CYSS. The fact that this year, AISA bettered its overall votes as well as vote share in spite of contesting alone, shows that AISA’s roots in DU are strong, and it is a growing force.

In a piece in the Live Wire, Damini wrote about her experience of  contesting the polls:

Campuses are spaces to exercise our freedom of speech and expression – platforms for informed debate, dissent and discussion. When I contested as the presidential candidate of AISA in the 2019 DUSU elections, all wanted to do was restore this space. When I started my Masters here at DU, I remember how whenever I saw hooligans on the street, I would feel a sense of fear. Today, this fear is being normalised across the university and the nation.

And so, a common student at DU even fears to go and vote today because he or she could be beaten up anytime or be subjected to violence. In such an environment of fear, a student cannot even exercise his right to vote.

Except three, none of the women colleges in Delhi University are a part of DUSU. Administrators often say that not being a part of DUSU ensures the safety and security of women.

I, as a woman, strongly reject this flawed notion of security which works only to impose restrictions on us. We don’t need security, we need freedom from patriarchy. The right to vote and to contest elections is a fundamental right and – as a student activist – I wish for all women students to be given this right.

Unlike what convention dictates, politics for me wasn’t only about power. Being a woman candidate who had curfew timings at home, campaigning during the night was freedom for me. Contesting elections not only made me more aware about politics but helped me explore myself too. It gave me greater enthusiasm to keep the struggle going to restore democracy in academic spaces, and exercise my freedom of speech and expression.