By turning Hindu festivals into platforms for Islamophobic propaganda and violence, the Sangh is seeking to poison the whole of Hindu society. 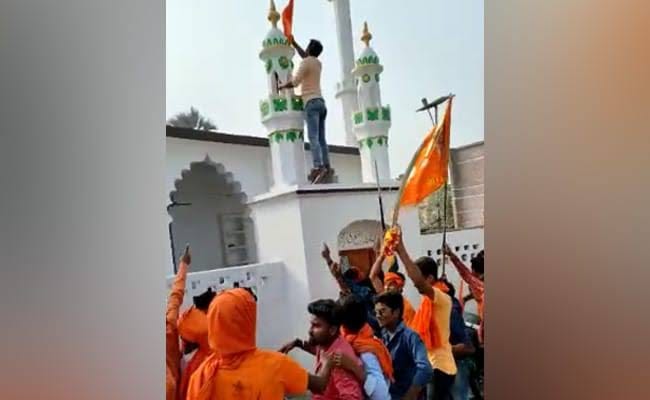 We are deeply concerned at the incidents of anti-Muslim stone pelting, communal violence and intimidation by Sangh outfits under the pretext of Ram Navami celebrations on April 10. Such incidents took place in Himmatnagar and Khambat (Gujarat), Khargone (Madhya Pradesh), Lohardaga and Bernie (Jharkhand),  Shibpur (West Bengal), and also Jawaharlal Nehru University (New Delhi).

In the run up to Ram Navami itself, we had BJP leaders as well as communal elements in administrations making public announcements of a ban on sale and consumption of meat. These were accompanied by attacks by Sangh mobs on meat shops owned or run by Muslims. In JNU, the ABVP violently attempted to prevent mess workers from cooking and serving non-vegetarian meals in a hostel mess, and then beat up students eating in the mess with rods and rocks, injuring many.

Ram Navami processions became occasions to play songs calling for genocide of Muslims; to raise Hindu-supremacist slogans and taunts outside mosques; and to vandalise and set fire to mosques as well as Muslim shops and homes. In Gujarat and MP, as well as JNU, the open patronage of the state machinery was on display. In Khargone on the day following Ram Navami, the administration demolished the Muslim homes which survived the arson and vandalism of the mob. This fascist act followed a statement by the MP Home Minister Narottam Mishra saying, “Jis ghar se pathar aaye hain, us ghar ko hi patharon kaa dher banaenge (We will turn the houses from where the stones were pelted to a heap of rubble).

Unfortunately much of the media has portrayed these fascist attacks on Muslims as “clashes” between Hindus and Muslims or, as in JNU, between Right and Left student organisations. There is a calculated effort to portray the perpetrators (Sangh outfits) as the victims of violence instead. By turning Hindu festivals into platforms for Islamophobic propaganda and violence, the Sangh is seeking to poison the whole of Hindu society. We call on democratic sections of society to hold protests all over the country  against such propaganda and violence. It is particularly imperative that progressive and peace-loving sections from the majority community explicitly reject this violence being perpetrated in their name.