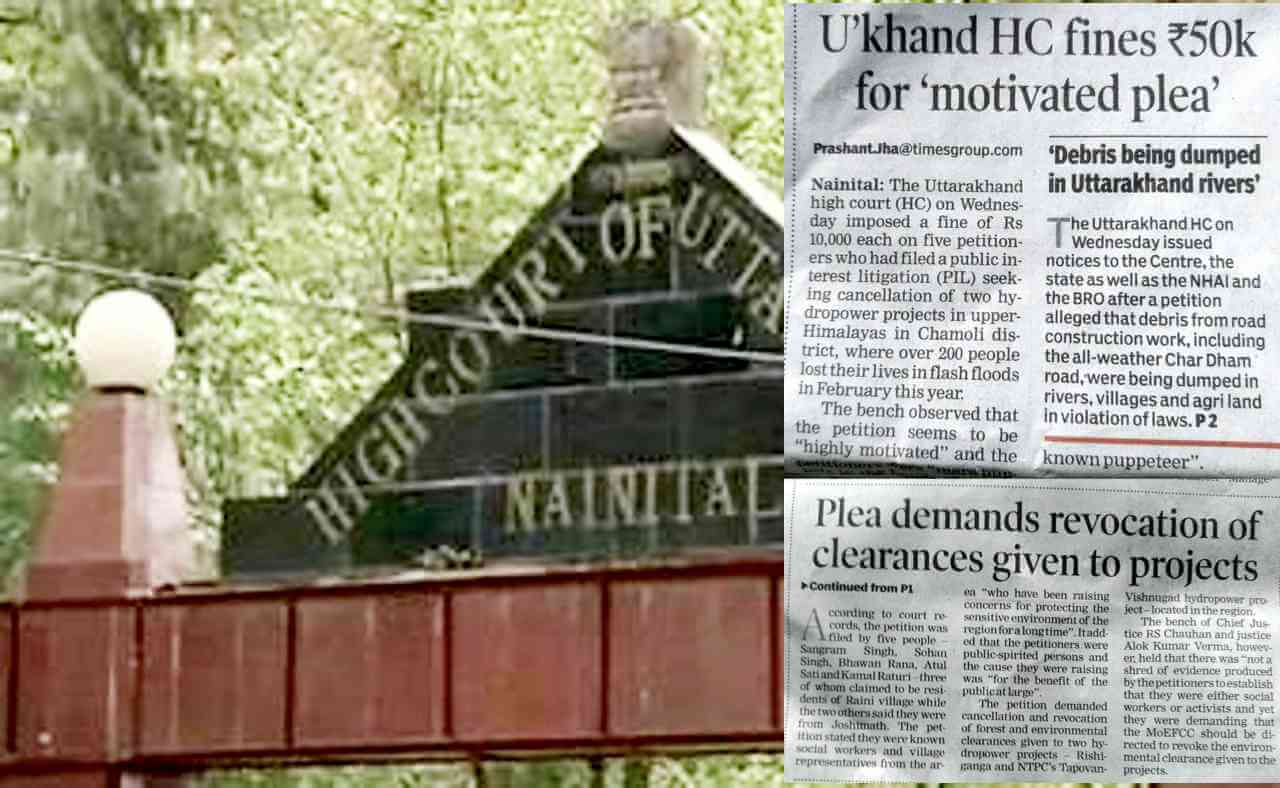 An order by the Uttarakhand High Court imposing a Rs 10000 fine each on five environmental activists for a PIL filed by them, will serve to intimidate and deter any citizen from raising environmental and social concerns that conflict with the interests of corporate projects.

On 7 February 2021 a glacier with debris rolled down to Raini village situated 20 km from Joshimath at the confluence of the Dhauli and Rishiganga rivers, submerging the Rishiganga Power Project and washing away 30 workers working at the site. The debris filled waters then rolled on, destroying buildings in its wake, and submerged the 530 megawatt Tapovan Vishnugarh project, killing some 170 workers working on this project.

Local citizens and activists have for decades been raising concerns about the steep human and environmental costs of building large projects on Mountain Rivers. Their repeated warnings have been ignored in spite of the fact that these concerns stand validated by the repeated accidents of the kind witnessed in February 2021. Since politicians in power tend to make decisions aimed at short-sighted and expedient gains for their own class and for big business, they tend to ignore social and environmental concerns. It is the job of courts to uphold the environmental laws and the larger public good in these matters, as well as the constitutional rights of ordinary citizens. This is why five people (Sangram Singh, Sohan Singh, and Bhawan Rana from Raini village; Atul Sati and Kamal Raturi from Joshinath) filed a PIL in the Uttarakhand HC seeking cancellation of the Rishiganga and Tapovan Vishnugarh projects. The HC has unfortunately fined the petitioners steeply deeming the PIL to be “highly motivated” and accusing the petitioners of being “mere puppets in the hands of an unknown puppeteer”. Such language seems to stem from an ideological hostility to environmental activism rather than from any specific facts relating to the petitioners who are well known and respected activists in Uttarakhand.

We may recall that in March 2021, the same bench of the Uttarakhand HC imposed a fine of Rs 50,000 on a petitioner who had filed a PIL seeking that exams for the post of assistant conservator of forests be held after the Kumbh Mela at Haridwar was over, to avoid exposing candidates to coronavirus infections that the influx of out-of-state devotees to the Kumbh might cause. The court dismissed the petition as frivolous on grounds that the exams were being held two weeks before the Mela was to begin. But the fact is that the influx of lakhs of devotees and visitors into Uttarakhand had begun long before the formal start of the Mela. Moreover now we know that the petitioner’s cause was far from frivolous -it stands vindicated because the Mela did indeed prove to be a super-spreader event, contributing hugely to the second wave of Covid-19 which killed lakhs of people all over India.

We would urge the courts to be less hasty in dismissing petitions raising life and death matters of public interest. In the specific case in point, we strongly protest the imposition of a fine on CPIML activist Atul Sati as well as Sangram Singh, Sohan Singh, Bhawan Rana, and Kamal Raturi. These activists deserve respect and gratitude for their work to save the Himalayan rivers and mountains, reminding us in India that we are not the owners of these rivers and mountains; we are, to use the words of Karl Marx, “simply its possessors, its beneficiaries, and have to bequeath it in an improved state to succeeding generations.”

The Uttarakhand High Court in Nainital on 14 July dismissed the public interest litigation filed by people from the disaster affected region. According to newspaper reports so far, the reason given for the dismissal is that the petitioners are not serious and the court is not sure about their intentions. It is astonishing that this is all that could be found in the 450-page PIL.

Three of the petitioners are native residents of Raini, a village affected by the disaster. The court has been approached after a unanimous decision at a Gram Sabha meeting. Of the three, one is the Gram Sabha Pradhan Bhavan Singh Rana Ji; another is a former Panchayat member Sangram Singh Ji who had earlier gone to the court against the Rishiganga Power Project; and the third is Chipko Movement leader Gaura Devi's grandson Sohan Singh Ji.

Of the two petitioners who are from Joshimath, one is Kamal Ratudi, a Congress leader who has been an activist for more than 20 years and has led the struggles of educated unemployed persons. He has always been active in movements against dams in Joshimath. The 5th petitioner is Atul Satee, a member of the CPIML State Committee and a leader of various movements including the movement for Uttarakhand as a separate state. He has been active for more than 20 years in the Hydel project movements. He has consistently spoken, written and fought for environmental issues.

In addition to the issue of displacement of Rini village, the petition raised the issue of fixing accountability on the companies whose negligence led to the death of more than 200 people, saying that is a matter of criminal negligence. Since natural geographic conditions have changed after the flood, the petition appealed for cancellation of environmental approval for dams and requirement of re-application for approval. It also demanded proper compensation for the deaths that occurred due to dams and black-listing of companies that have been guilty of criminal negligence. From the beginning, we have considered these dams to be destructive and so have demanded their cancellation.

Instead of debating and discussing these important issues, the government-NTPC advocate questioned the intention and trustworthiness of the petitioners, who are people who have fought for years for people's issues and have faced cases and even gone to jail for the people.

This decision is not only a violation of our democratic and Constitutional rights, but will also set a precedent for preventing other people from raising their voice in future. Therefore we will appeal to the court to reconsider this decision. If we do not succeed, we will knock at the door of the Supreme Court.