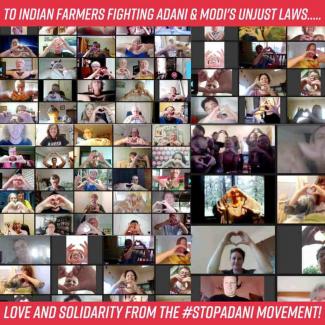 As a people-powered movement that has prevented the Adani company from digging its climate-wrecking coal mine for ten years, the Stop Adani movement of Australia stands in solidarity with Indian farmers leading mass peaceful protests against Prime Minister Modi and Gautam Adani’s farm laws.

Arguably the largest protests in human history, with organisers estimating 250 million people took part, farmer-led protests erupted in response to three laws passed by Modi’s Government, with farmers concerned deregulation of agricultural markets will favour corporate interests such as billionaire Adani’s agricultural businesses, and make farmers vulnerable to exploitation.Blatant crony capitalism in India and Australia favours billionaires at the expense of communities, families and the environment. Recent news of a $1 Billion (5000 crore) loan from the State Bank of India to Adani confirms that Modi’s Government is working for corporate interests above all else.

In Australia too, Governments have showered Adani’s coal project with public funds and special treatment, with mass protests stopping a $1 Billion public loan to Adani in 2017. Governments must act in the public interest by putting farmers, communities and the environment first. The Stop Adani movement will continue to push government decision-makers to act for the public good, and support those campaigning against crony capitalism in India.Stop Adani spokesperson and Indian-Australian Manjot Kaur said: “My family in Punjab comes from generations of farmers, the same farmers that are currently protesting against Modi and Adani’s farm laws.

“My father, grandfather, and many before me have been farming wheat on the same land, for generations. My family wants to continue farming for generations to come, but these law changes and climate change threaten our way of life. My grandfather has seen the weather change, seen the river he used to play in become polluted, and struggled against drought.

“Crony capitalism in India is driving Indian farming communities to the brink - from deregulating agricultural laws for big corporates to the State Bank’s 5000 crore (AUD $1 Billion) loan to Adani for their dangerous coal project, a project that will mine and burn coal and bring more climate disasters to Indian farming communities. Farmers that are fighting for their existence are the ones who deserve support from the state bank and protection from the Government, not billionaire coal companies like Adani.”

Central Queensland farmer Simon Gedda said: “As an Australian farmer in Queensland, I stand in solidarity with the millions of Indian farmers who are pushing back on Adani and the Government's farm laws.“It can be tough being a farmer, not only do we battle the elements and increasingly, climate change impacts, but we are now called on to protect farmers rights against billionaire coal barons. This is a fight many Australian farmers understand, and it's a fight we can't shy away from.“Adani and pro-coal Governments are ruining farmers' livelihoods from India to Australia." Amongst other changes, the farm laws could lead to minimum support price (MSP) safeguards being scrapped. MSP guarantees a price for farmers for particular crops, no matter the seasonal outlook.

As the world experiences more droughts, heatwaves, floods and storms from climate change, driven by export coal from Australian coal mines, these farm law changes make Indian farmers even more vulnerable to the seasonal disruptions that will intensify with climate change. Projections estimate climate change will reduce wheat yield in India by up to 23% by 2050.