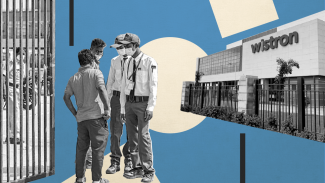 AICCTU visited Narasapura Industrial estate (Kolar district, Karnataka) to meet with the workers in light of the incidents of 12.12.2020 when thousands of workers protested at Wistron factory raising several demands, and which ended in properties of the factory being destroyed and police action against the workers. A protest was also held at the Deputy Commissioner’s office at Kolar on 18th December 2020 demanding urgent steps to be taken to safeguard the rights of workers. Excerpts from AICCTU’s report follow.

Wistron, a multinational corporation from Taiwan, has its establishment at Narasapura Industrial Estate where iPhones are assembled for Apple Inc. Operational post lockdown, it employs1 1343 regular/permanent and 8490 contract workers, supposedly sourced from six contractors. The workers are engineering graduates, ITI diploma holders and PUC/10th standard pass. Contract workers consist of three broad categories (a) migrant workers from other States including Tamil Nadu, Andhra Pradesh, Bihar, etc., (b) migrant workers from other districts of Karnataka, and, (c) workers from various villages in the taluks around Narasapura. The workers, especially those from the nearby villages are from extremely poor backgrounds and a large number of them belong to the Dalit community.

At the time of their appointment, they were informed that they would receive wages of Rs. 22,000/- per month including overtime wages. The Wistron establishment only operates 2 shifts – 6.00 a.m. to 6.00 p.m. (day shift) and 6.00 p.m. to 6.00 a.m. (nigh shift). The conditions of work are rather horrific. Each worker is compelled to do 12- hour shifts every day/night and has no say on which shift they can opt for.

There is no avenue for redressal of grievances of the workers. The irregular, erratic and reduced payment of wages is an issue that was raised repeatedly and yet remains unaddressed. While the workers were promised monthly wages of Rs. 22,000/-, they have received substantially less wages despite having worked overtime on all days without any leave. Wages for the month of November are yet to be paid to the workers despite their numerous requests to do so. One issue that the workers have raised is the fudging of their attendance leading to them getting lesser wages.

On 12.12.2020, workers yet again sought their wages from the HR and other Wistron officials but were turned away. This appears to have happened between the night and day shifts. Wages continued to be withheld, and an agitation ensued, in the course of which some of Company’s property was damaged. There is no doubt that it is the non-payment of wages and other labour law violations which are the immediate cause of the unrest.

It is being reported that about 150 workers have been arrested, however, no details are available about them. There is also an atmosphere of fear prevailing and workers are living in the anxiety that the police will come banging on their doors irrespective of whether they participated or not in the December 12th incident.