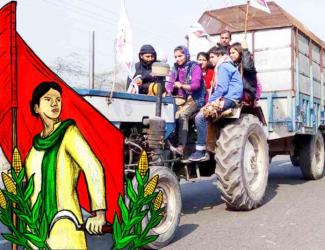 Last year the International Women's Day was observed in India at the crest of the equal citizenship movement, with numerous Shaheen Baghs across the country emerging as a novel, electrifying form of protest. Today as we approach the 8th of March, we are witnessing, and participating in, a vastly expanded, much more colourful and powerful re-emergence of the Shaheen Bagh spirit on the borders of the national capital - - the Kishan Shaheen Baghs, so to say. If on the previous occasion women fought alongside men against three black laws/projects concerning citizenship, this year peasant women are on the warpath, hand in hand with their male counterparts, against three devastating farm laws. Both instances mark new milestones in the struggle for emancipation of women as well as the broader people's movement against the multiple onslaughts of the fascist RSS-BJP regime.

So impressive are the mobilization of women in the outskirts of Delhi and in the numerous rallies, that even the godi media could not ignore the stunning visuals. In many cases two or even three generations are present in the battlefields. Preparing food, dusting and cleaning the camps and roads, taking care of children -- including their studies -- in almost all types of work women from diverse backgrounds and belonging to all age groups are busy from dawn to dusk and beyond. In their talks with journalists and other visitors – and of course in their speeches from the stage -- one could easily discern a deep self-realisation and a strong determination to go on fighting till the black laws are repealed. Stepping out of the daily drudgery of domestic chores and patriarchal restrictions, and enjoying a more vibrant community life in an open space, they are visibly happy -- very happy. This, and the granite resolve of a protracted struggle, make them stay put in the biting cold and sundry other discomforts.

But real life is harder than what we see on our TV screens. Farmers on the protest sites cannot forget for a moment the fields and the crops (whether harvested or still on the fields), the cattle and the homestead, and the younger and older members of the family they have left behind. So in many villages they, especially women, form small groups between themselves and take turns in attending the border camps for a week or so, while neighbours look after whatever the outgoing group leaves behind. In all these arrangements they usually get full cooperation from the menfolk: after all, it is a common battle for a common cause. In fact the entire movement comprising both the forward posts on Delhi border and the supply lines from other towns and villages has emerged as a spectacular illustration of -- or, if you will, a vast, vibrant, creative workshop on -- gender parity and cooperation.

The spontaneous, independent and highly visible assertion of women farmers is certainly an eyesore to the patriarchal power structures embedded in our society and state. So the Chief Justice of India took upon himself the task of advising the farmer leaders, in the protective tone of a kind guardian of Indian women, not to "bring" women to the protest sites because they are, like old people and small children, too week to bear the biting cold and other hardships out there. But the learned CJI should know that it is not leaders and husbands who "bring" women along: the latter join the protests on their own simply because they too are peasants toiling on the fields in extreme weather conditions and they are as knowledgeable and concerned about the disastrous impact of the farm laws on agriculture and therefore on the whole people of India as their male counterparts. He should also accept that the supermen of the Judiciary simply have no business lecturing Indian women on where and when they should go or shouldn’t go and exercise their constitutional right to protest. Women are not a 'weaker sex' in need of benevolent patriarchal protection: they are born free and everywhere they are now breaking free from the chains thrust upon them over the ages. Their energetic and conscious participation in broader political movements like the farmers’ agitation is objectively a major means to this end.

The AIKSCC took the CJI's advice with the same contempt with which it had earlier rejected the blatantly pro-government, anti-farmer mediation panel. More, in recognition of the equal share of women in agriculture and in the movement, it went on to observe the 18th of January as Mahila Kisan Diwas or Women Peasants' Day (WPD). On that festive day women peasants and agrarian workers reached the protest sites on tractors, other vehicles and on foot in great numbers. They conducted the day's proceedings on the stages and enthralled the huge gatherings with their speeches and songs. The audience responded with loud slogans and attractive placards in several languages, the central message being “Women’s place is in the resistance” – a rebuff to the patriarchal adage that “women’s place is in the home.” Many activists including AIPWA leaders like Kavita Krishnan, Meena Tiwari, Krishna Adhikari and others joined the assembled farmers and addressed them. Comrade Jasbir Kaur Natt, who has been active on the Tikri border and contributing to the movement’s organ Trolley Times from the very beginning, also addressed the assembly. Effigies of IMF and WTO were consigned to flames because these agencies had been batting for the highly contentious farm laws even as Indian farmers were up in arms against these Acts. Interestingly, the Government of India saw the agencies' intervention as a certificate of merit even as it condemned the observations of Greta Thunberg on the same Acts as interference in India's internal matters!

The WPD was observed in other places also. In West Bengal for example, a "Women Peasant-Agrarian Labour Assembly" was organised in Kolkata under the joint initiative of the AIKSCC, AIPWA and many other women’s, peasants' and agrarian labourers' organisations. Among the resolutions unanimously adopted in the Assembly, the most notable ones are: the CJI must apologize for his observation on women protestors; women farmers must be accorded due recognition as farmers and women agrarian labourers must be paid fair and equal wages; the three farm laws must be repealed and replaced by pro-farmer laws that guarantee joint ownership of all agrarian properties; mandatory MSP for all agricultural produce and government-run Mandis/procurement centres at Panchayat level; small loan waiver for all women. The Assembly was followed by a spirited 500-strong torchlight procession from Esplanade to Sealdah station.

The WPD was also observed in Panduah and Dhaniakhali, both rural areas in Hooghly district. Women agrarian labourers and poor peasants including Dalits and adivasis as well as activists in the loan waiver agitations participated in these meetings.

The enthusiasm of WPD was carried forward on the occasion of the grand Republic Day Parade by peasants in the national capital. Women farmers loaded their tractors with sathins and sisters and took part in the parade in large numbers. Sitabai Ramdas Tadvi (56), an Adivasi peasant from Maharashtra who had been active in various agitations during the last 25 years including the march against Reliance Industries in Mumbai on 22 December last year, participated in the parade till late in the night. She fell sick from exposure to severe cold and died on her way back home, adding one more name to the long list of martyrs in the current movement.

The fighting spirit of protesters remained intact even after the post-26 January crackdown. The following report, based mainly on a story in The Wire, 11 February 2021, reveals how women coped with the ordeal let loose on farmers by the authorities at the Singhu border.

A daily supply of water tankers from Delhi had been the most important lifeline of the sprawling protest site. When the vindictive authorities cut off that lifeline by blocking all entry routes, essential services like cooking food, cleaning utensils and supplying water to the bathrooms and washrooms came to a grinding halt. To further punish the protesters, power lines were also cut off. Toilets became unusable. While men somehow managed, women were at great difficulty, especially at night. For menstruating women, the situation was even more horrible. However, within a day or two people in nearby villages - - workers from Kundli Industrial Estate, sports persons, wrestlers and their coaches, and the youth in general - - joined hands with the volunteers to gradually restore water supply with hundreds of bucket and a few hose pipes. The volunteers even dug three borewells, installed motors and laid water pipes and taps near the mobile toilets within five days. In this Herculean exercise the camaraderie extended by people of Kundli village deserves special mention. 23 year old Nodeep Kaur hails from this village. Since early January this year she has been behind bars under charges of extortion and attempt to murder. Her real ‘crime’ was that she had been mobilising workers of the industrial estate in support of the agitating farmers and she must be very happy to learn that her mission was successful -- the workers did help the distressed farmers in a big way.

The camp volunteers, including female ones, managed to clean up the toilets pretty quickly. They also took special care to ensure that no miscreant could enter the camp and harass the ladies under cover of darkness. Even in the face of enormous difficulties and unhygienic conditions, women protesters did not flee from the battlefield. They stood by one another, took care of children and the elderly and continued the fight.

As we write this report, women peasants and agrarian labourers are also vigorously participating in the numerous Kisan Mahapanchayats being held in adjacent states and gradually also in other states.

Like every genuine mass movement with a grand vision -- the best case in point being the last leg of our freedom movement - - the current farmers’ agitation too has mobilised the young and old, the higher and lower castes and classes, and men and women solidly together in the fight against a very clearly identified enemy: the Adani - Ambani Company Raj in cahoots with the cunning, treacherous, authoritarian Modi government. A vast war front like this provides the women's movement with the required space to spread its roots and branches, gain strength and advance towards the attainment of its own specific goals as part of a wider socio-political transformation. In addition to the current farmers’ movement, the months preceding IWD 2021 also witnessed massive militant movements by other sections of working women -- notably various scheme workers (think the long-run agitation of ASHAs in Haryana, Bihar and other states) and microfinance loanees despite Covid restrictions. This reminds us once again that downtrodden working women still remain as basic a powerhouse of women's movement as in the initial years of celebrating the International Working Women's Day (as it was called then).

At the same time, the courageous role played by girl students and minority women as well as women journalists, lawyers, intellectuals and activists in the recent past (think Disha, Nikita and many others) clearly demonstrate the growing synergy between the women's movement and other progressive movements. On 8 March 2021, while raising our voices on critical issues like growing violence against and patriarchal restrictions imposed on women, 'Love Jihad' and anti-conversion laws, the just demands of scheme workers and microfinance loanees etc., let all women groups and activists take a special pledge to further consolidate this synergy, to strengthen people's united struggles against the increasingly aggressive fascist regime in India and to make the world a better place to live in.