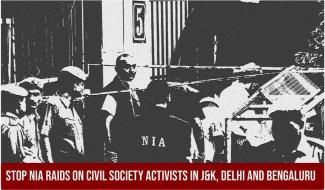 We condemn the raids by the National Investigative Agency on a range of civil society groups and individuals in Jammu and Kashmir, Bengaluru, and Delhi. The NIA claims the raids are to crackdown on “terror funding” – but that is a transparent excuse to harass and silence all those expressing concern for the rights and wellbeing of the people of Jammu and Kashmir. By using the NIA to crack down on human rights defenders, humanitarian groups, journalists, and citizens, the Modi regime is seeking to ensure that there are no witnesses for its crimes against the people of J&K.

The groups and individuals targeted by the NIA have a long and impressive track record of human rights and humanitarian work. The Jammu Kashmir Coalition of Civil Society (JKCCS), for instance, has researched and documented reports on unmarked mass graves, fake encounters, custodial torture, sexual violence and the impact of violence on children in J&K. The JKCCS has also pursued the cause of a credible probe to ensure justice for the Kashmiri Pandits killed in the Valley. The Association of Parents of Disappeared Persons (APDP) is an organisation that has led one of the longest standing peaceful struggles for justice and truth: organising parents of persons “disappeared” by the state forces to march every week in their memory.

Another target of the NIA raids is Zafarul Islam Khan, former chairperson of the Delhi Minorities Commission, and founding editor of the Milli Gazette newspaper, who runs the humanitarian group Charity Alliance. Under Mr Khan, the Delhi Minorities Commission published a damning report on the Delhi violence of February 2020, documenting evidence of Delhi Police involvement in the targeted violence against Muslims. The Charity Alliance had provided relief to the victims of the Delhi violence.

There are several other groups targeted by the NIA raids, that are known for their sustained humanitarian work, disaster relief work, and charity work in the J&K region. The Modi regime, by tarring such groups with the “terror” brush, is seeking to prevent the people of J&K from being able to access even humanitarian aid and relief during crises. NIA also raided the offices of the Greater Kashmir newspaper – a respected paper known for its impeccable and courageous journalism.

In Bengaluru, the NIA raided the home of Swathi Sheshadri – a concerned citizen who has responded conscientiously to people in need, and consistently raised human rights concerns in her own city and in other parts of India. During the lockdown, for instance, Swathi Sheshadri worked as part of the broad civil society coalition “Bangalore With Migrants” helping to provide relief to migrant workers left stranded in Bangalore without food or shelter.

Under the Modi regime, the NIA, like many other institutions, has become a “caged parrot”: known for weakening the case against bomb-blast accused BJP MP Pragya Singh Thakur, and ensuring bail for Davinder Singh, the J&K police officer caught ferrying terrorists, while going after human rights defenders, lawyers and journalists in the Bhima Koregaon case. Now, the NIA witch-hunt is expanding, with the new pretext being Jammu and Kashmir.

All over India, the poor and oppressed are familiar with arbitrary, high-handed violence by police and other state agencies. The killing of Jeyaraj and Bennicks in Thoothukudi by the Tamil Nadu police has put the spotlight on India’s epidemic of rampant custodial torture and custodial killings. More recently, people have been outraged at the police lathicharge and firing on devotees waiting to immerse the Durga idol in Munger, Bihar. There have been angry demonstrations at the offices of the Munger police authorities, with some protestors even setting some vehicles on fire. People rightly rejected the police excuse that stone pelting by the devotees in reaction to the lathi charge, forced the police to fire. It is human rights defenders who hold up the Constitution as a shield between the police and the citizens, in Munger, Bastar, Jammu and Kashmir. It is journalists who expose the truth, be it in Munger or in Thoothukudi or the Kashmir Valley. The NIA raids and arrests of human rights defenders and journalists, is to remove that Constitutional shield. We the people of India must stand up to defend the rights and liberty of those who have been defending our rights as citizens and human beings.