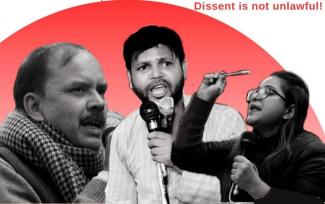 The Social Pattern of Covid-19 Deaths

In India, of course, we still do not have accurate countrywide data in the public domain on Covid-19 cases and deaths, let alone any socio-economic breakup. But some reports are revealing. Tabassum Barnagarwala reported in the Indian Express on May 7, 2020 that “of the 548 deaths recorded in Maharashtra as of May 3, 239 (44 per cent) are from the minority Muslim community — almost thrice their share (just under 12 per cent) in the state’s population.” The number of infected persons from the Tablighi Jamaat event in Delhi was actually very low – just 69 in all of Maharashtra. So what was the reason for Muslims’ disproportionate representation in the Covid-19 deaths?

Barnagarwala reports that “a significant share of the (Muslim) community lives in neighbourhoods where social distancing is difficult, population density is high, and access to healthcare poor.” State epidemiologist Pradeep Awate told her, “The cases are spreading in slums not because of a particular religious group, but because of poor living conditions. And in the slums, Muslims are in large numbers. At least 8-10 people live in a small room where social distancing is difficult.” Muslims in India are disproportionately poor, as the Sachar Committee report had established.

But while the Tablighi Jamaat meeting in Delhi itself did not lead to a surge in cases in Maharashtra, the communal political and media campaign around it perhaps did, writes Barnagarwala. She quotes Bhiwandi MLA Rais Shaikh: “The Tablighi Jamaat episode instilled fear in the community. They do not report symptoms fearing they will be stigmatised.”

The Maharashtra Government, taking note of this issue, took special measures to reassure the minority community, requesting mosques and maulanas to help spread the message that Muslims should not fear to report symptoms. But the story in other states is very different. 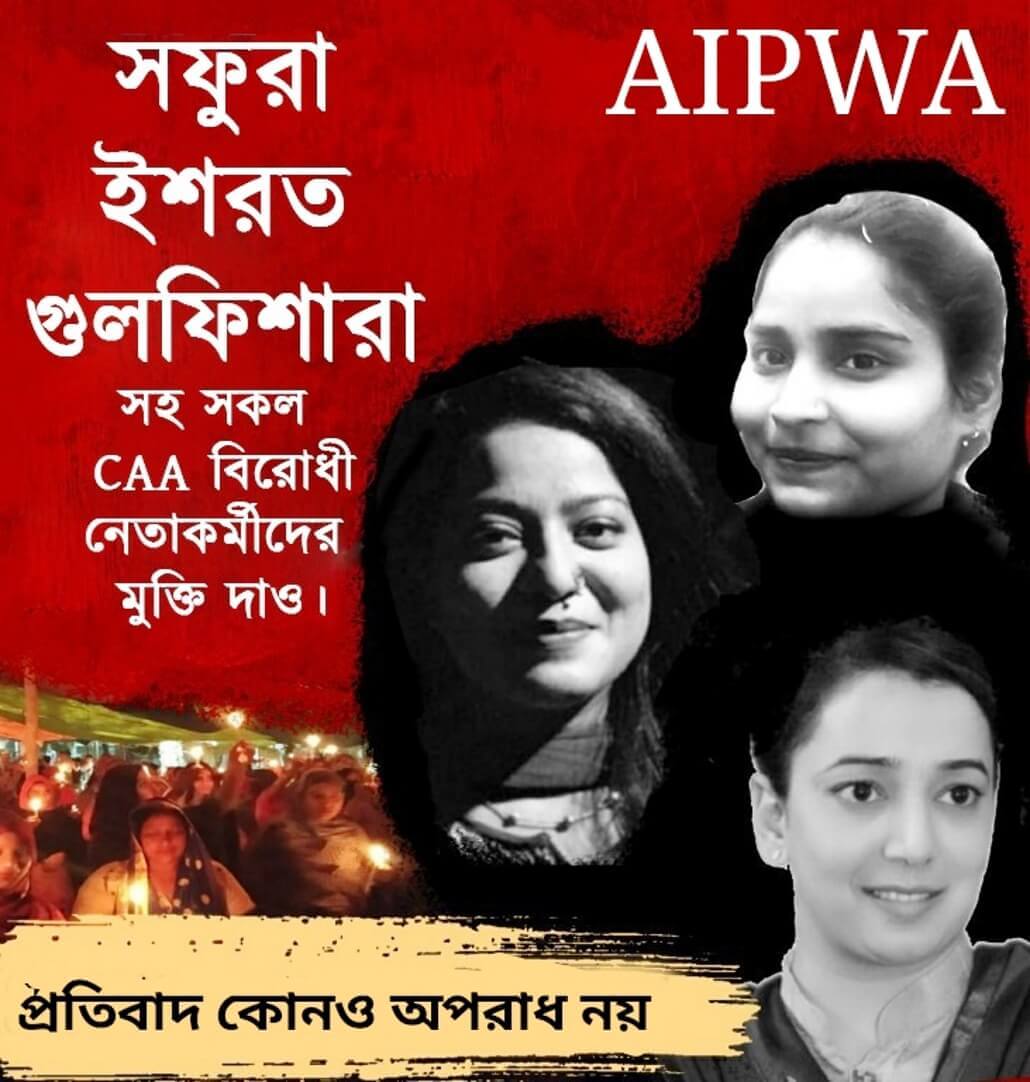 There are many instances of hospitals denying treatment to persons because they are Muslim, equating Muslims with Covid-19 infection. In Jharkhand, Rajasthan, and Bihar, there have been instances of pregnant Muslim women losing newborns after being denied treatment by medical staff who said Muslims spread Covid-19. AIPWA and CPIML in Bihar took up the cause of Gulshan Khatoon who was denied treatment in a Buxar hospital on account of being Muslim.

There have been multiple instances of street vendors facing boycott or violence because of being Muslim and therefore equated with Covid-19.

Mumbai is one of the cities worst affected by Covid-19 in the world. Interestingly, journalist Tabassum Barnagarwala of the Indian Express told data journalist Rukmini S (on the latter’s nightly podcast The Moving Curve), that “BMC and Mumbai Government hospitals are ramping up Covid-19 beds. A huge problem is the (lack of) participation of private hospitals in the pandemic. The Government is taking care of 80% of Covid patients, with the private hospitals taking care of a mere 20%”. Remember this fact, when governments tell us that healthcare must be privatised, private hospitals be provided heavily subsidised land, and the needs of poor patients can be taken care of through Ayushman Bharat type health insurance and through beds reserved for the latter in private hospitals. In a pandemic, the private hospitals which are flush with resources, refused to step up and provide care to the needy. If it is government hospitals which must come to the rescue in times of greatest need, then why not invest in them rather than in privatised healthcare? How would Ayushman insurance help poor patients if the private hospitals simply do not provide Covid-19 beds?! 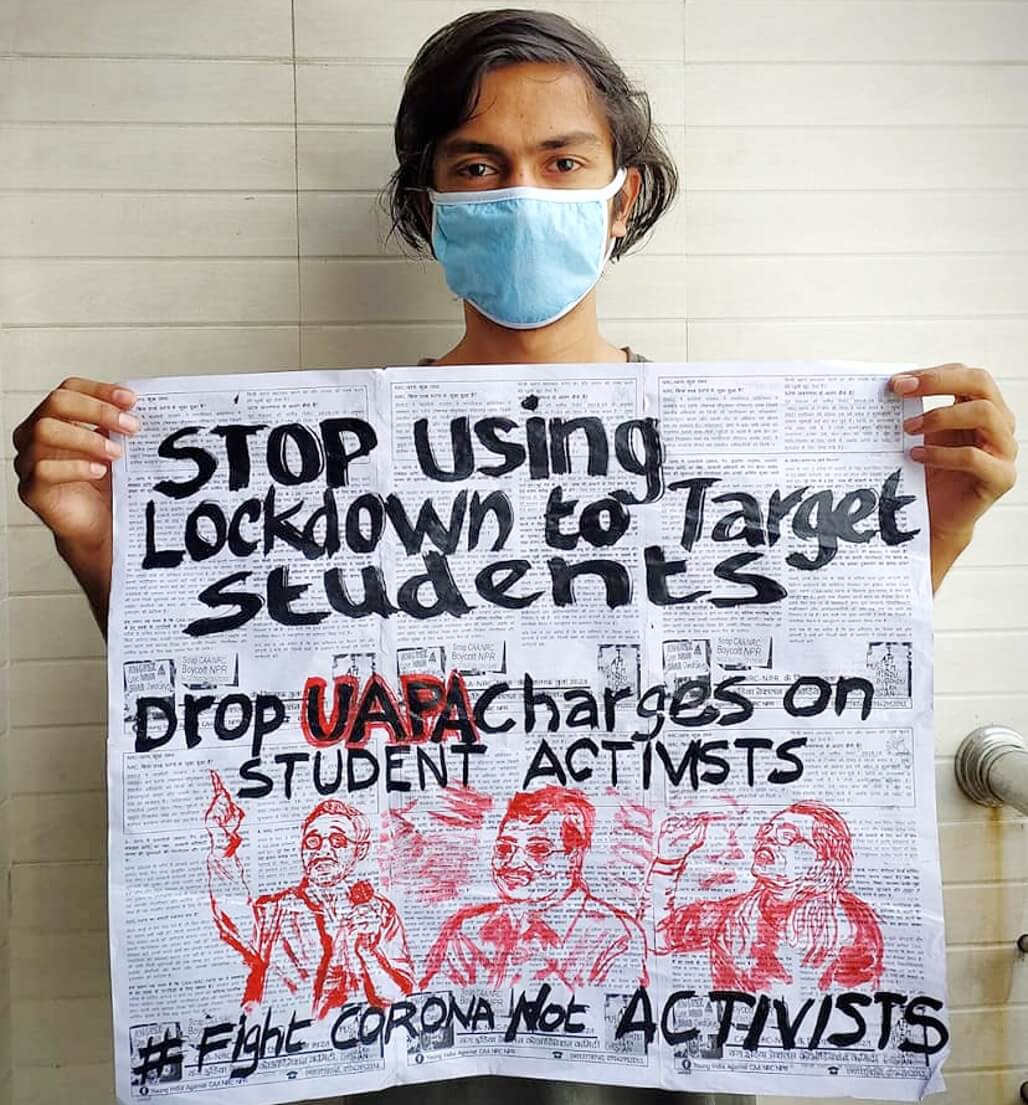 Gujarat has emerged as one of the worst states in India when it comes to handling Covid-19. Gujarat was ruled by Narendra Modi from 2001-2014, and during his first bid for the post of PM, his media managers touted the “Gujarat Model” of development that Modi would now bring to the rest of India. Here are highlights from Modi’s model state:

Body at bus stop: The body of Covid-19 patient Chhagan Makwana (67) admitted at Ahmedabad Civil Hospital, was found dumped at a bus stop. Hospital authorities did not inform the family of the man’s death, and could not explain how the body of their patient ended up at a bus stop.

Fake ventilators to benefit cronies: Gujarat Chief Minister Vijay Rupani promoted a Rajkot-based private company’s “breathing apparatus” as “ventilators” supplied free of cost to Ahmedabad hospitals. The company’s CEO is the CM’s friend Parakramsinh Jadeja. The State Government in a press release claimed, “Rajkot-based private company Jyoti CNC had developed the ventilator 'Dhaman-1' in a very short period of just 10 days. The manufacturing cost of Dhaman-1 is less than Rs 1-lakh per piece. This great achievement would add a new feather to Prime Minister Narendrabhai Modi's dream campaign of 'Make in India.' It later turned out the “ventilator” was fake, and was in fact a mere “ambu-bag.” Ahmedabad Civil Hospital Medical Superintendent JV Modi wrote to the managing director of Gandhinagar-based Gujarat Medical Services Corporation Limited (GMSCL) for 50 'high-end' ICU ventilators for the 1,200-bed COVID-19 facility. He quoted a letter from the head of the anaesthesia department of the BJ Medical College, affiliated to the Civil Hospital, stating that they are not getting the "desired result" from Dhaman-1 and AGVA ventilators. 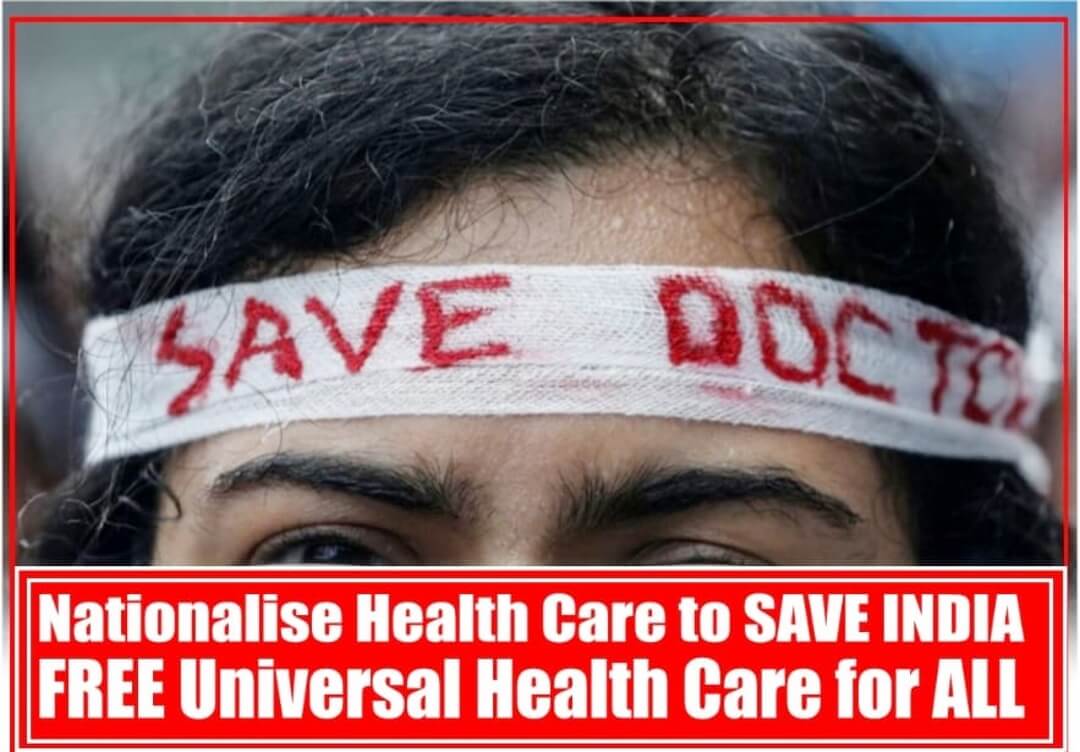 Profiteering from the pandemic: The Rupani Government began selling N95 masks to the public – at a profit of 31%!

State’s Best Hospital Is Worse Than a Dungeon: The Gujarat High Court observed that the Ahmedabad Civil Hospital was “pathetic...as good as a dungeon, maybe worse”, and described Gujarat as “one of worst affected states” in the country due to “lack of PPE, shortage of ventilators, ICUs and isolating wards.…”. For good measure the High Court added that “there is no single command and control structure in Civil Hospital” and “the health minister of Gujarat does not seem to be aware of what is going on, nor appears to have ever visited the hospital”. The judges, in their order, asked “We wonder how many times the Health Minister has visited the Civil Hospital to take a stock of the situation? Does he have any idea of the problems faced by the patients and even the employees working there? The same goes for the Health Secretary. Is the state government even aware of the hard fact that patients at the Civil Hospital are dying because of lack of ventilators? How does the government prepare itself to tackle this problem of ventilators? It is distressing to know that most patients admitted the hospital are dying within 4 to 5 days of treatment, which indicates a complete lack of critical care.”

In the midst of the pandemic, the Delhi Police at the behest of India’s Home Minister Amit Shah is busy harassing and arresting students, anti-CAA activists, and feminists, under draconian laws. Sociologist Nandini Sundar rightly observes that Shah is replicating the 'Bhima Koregaon model' in Delhi. In Bhima Koregaon and in the violence in NE Delhi, the real perpetrators of the violence (close associates or leaders of the ruling BJP) were left scot-free, while the victims of the violence (Dalits in Bhima Koregaon and Muslims in Delhi), as well as organisers of democratic protests, are arrested and charged with the crimes! 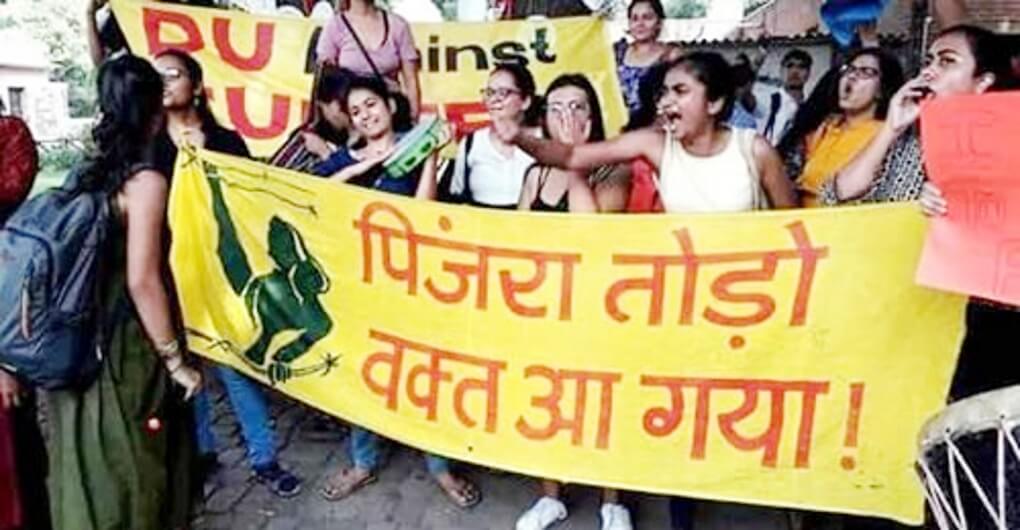 In Delhi, Jamia student activists Meeran Haider, Safoora Zargar, Asif Tanha, Jamia alumni association president Shifa-ur Rahman, anti-CAA activists Ishrat Jahan, Khalid Saifi, and Gulfisha, and Natasha Narwal and Devangana Kalita, activists of the feminist group Pinjra Tod have been arrested. When courts pointed out that no evidence had been presented and so gave bail to some of these young activists, Delhi Police promptly rearrested them under another FIR, or even under the draconian UAPA, under which bail is nearly impossible to get. Under these FIRs in the NE Delhi violence cases, the Delhi Police is also targeting activists of AISA and other stduents, confiscating phones and “interrogating” them for days on end, calling them to the Special Cell office at Lodhi Road where a constable was diagnosed with Covid-19.

"Samvidhan Ke Char Sipahi-Hindu Muslim Sikh Isai" (Four soldiers of the Constitution – Hindu Muslim Sikh and Christian) was the slogan of the anti-CAA protests. Those who raised that slogan are being arrested, while Kapil Mishra, Anurag Thakur and other BJP leaders who raised "Desh Ke Gaddaro Ko Goli Maro Salo Ko" (shoot the traitorous b...s) are left free. The BJP IT Cell and even leaders like Kapil Mishra are using social media to slut-shame the women activists who are arrested. Kapil Mishra tweeted a sexual innuendo about Safoora Zargar, and a series of morphed photos and videos of Jamia women, placing their faces on pornographic images of women, was circulated on social media.

Meanwhile, Covid-19 too is being used as a pretext to target any kind of dissent. The lockdown is helping to create a climate where any criticism of the government is leading to arrest and police harassment. Com. Bibek Das, CCM of CPIML from Assam, a staunch fighter for the rights of tea workers for decades and convenor of the anti-CAA platform in the state, was named in an FIR for social media posts raising questions about the BJP Government and BJP MLAs. The police seized his phone, but they could not arrest him because he was granted bail by the Gauhati HC.

Meanwhile in Tamil Nadu, an FIR was filed against CPIML and AICCTU activist Comrade Sahayam, at the behest of Adani’s Sterlite corporation.

In Andhra Pradesh following the Vizag gas leak, a 60-year-old woman P Ranganayaki raised 20 questions on social media – asking why there were no arrests in the Vizag gas leak case and why the government allowed the leftover Styrene to be sent back to South Korea. The AP police filed a case against her!

In UP, many CPIML activists were harassed or arrested by police for protesting from home against the Government’s unplanned lockdown.