The New Strategies of Hindu Supremacists in Britain 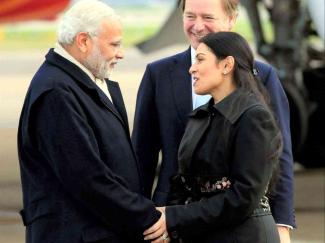 After a year of intense struggle, and in the face of harsh repression, India’s farmers’ movement has won a remarkable and inspiring victory.

Prime Minister Narendra Modi has been forced to give in to at least one of its key demands – the repeal of the pro-corporate Farm Laws, which they say his regime had arbitrarily imposed. Some 700 farmers have lost their lives in this year of struggle. Others say they have draconian charges hanging over them.

Modi’s climb-down is most likely because elections are looming. Nevertheless, the farmers’ victory is a brilliant spark of hope which illuminates the power of people’s movements and delivers the message that the struggle must continue – and that the Hindu supremacy and fascism of Modi’s BJP Government can be defeated.

In Britain, while many trade unions and Labour Party branches have expressed their solidarity with the farmers and others resisting Modi, there has been a surprising lack of interest in the fact that the BJP’s toxic ideology is coming to our doorsteps here.

The Hindu right has systematically set up, or taken over, a host of organisations in the UK. They include: the Hindu Swayamsevak Sangh (HSS), which is the overseas wing of the RSS – the fascistic ideological parent of the BJP; the Hindu Council UK; the National Hindu Students Federation; the National Council of Hindu Temples; and the charity Sewa International, which was exposed in 2002 for channelling funds to organisations which carried violent communal attacks in Gujarat.

It is also active as suave British Indian businesspeople and financial analysts, who are the other, hyper-neoliberal, face of the Modi regime – less well-known Priti Patel and Rishi Sunak-type figures. Against a background of Modi’s deepening relationship with Israel, these members of the Hindu right have been urging the Indian Government to copy Israel’s strategies – and not only militarily in Kashmir.

Back in 2014, when Modi first came to power, Alpesh Shah – a hedge fund manager and columnist for UK’s pro-Modi Asian Voice newspaper – wrote an open letter to the Prime Minister, urging him to make it the business of India’s Government to look at how Hindus are treated worldwide.

“This doctrine is not novel in international relations,” he said. “The people of Israel provide protection for Jews wherever they are in the world, of whichever nationality. We shall extend no less protection to Hindus.”

The assumption – central to Shah’s letter – that Hindus are under attack was already being used routinely by the BJP and its cohorts in India to instigate violence: lynching, massacres and pogroms against Muslims.

More recently, this notion of Hindus as victims has surfaced in the West too, increasingly suggesting that Hindus (like Jews) are under systematic racist attack – both in the UK and globally, and that they face ‘Hinduphobia’ and require justice and protection.

Racism, however, requires a contemporary or historical structure that generates and perpetuates it. No such structure exists in the case of Hinduphobia. Unlike antisemitism, Islamophobia or anti-black racism, it has no historical or material basis. In the UK, racism against Indians has always been directed at us as ‘Asians’ – and, since the 1990s, in the form of Islamophobia (if we are Muslims) – but never as Hindus. As someone from a Hindu background, in the nearly 60 years I have lived in this country, I have never faced racism directed at me as a Hindu despite often wearing a sari and a bindi.

In the US, one may assume, pressurised by the Hindu right, the FBI has added anti-Hindu bias as a possible cause of hate crimes. But its statistics, published in August, show that such crimes are negligible, even as attacks on black people and south Asians have escalated.

Does Hinduphobia exist in Muslim-majority countries?

In Pakistan, there have been attacks on Hindus but they can be seen clearly as just one element of the communal or sectarian violence directed at multiple minorities (including Muslim Shias and Ahmadiyas, Christians and others) by a majoritarian state. ‘Hinduphobia’ is therefore no more valid as a concept than ‘Christianphobia’.

In Bangladesh, horrific attacks have recently taken place on the Hindu minority. But the killings and attacks on temples are not part of a global phenomenon. Communal violence has been endemic in south Asia for many decades – often rising to terrifying levels. This has been acerbated, many activists say, by the knock-on effects of the rise of the BJP and raging Islamophobia in India on the south Asian region as a whole.

As for the claim that Hinduphobia exists in India too, this is absurd since India is a Hindu-majority country with a Hindu supremacist government in power.

Most significantly, there have never been any globally relevant structures, laws or policies – akin to the ‘War on Terror’ for example – which have attacked or discriminated against people as Hindus.

Alpesh Shah’s implication that there is a global community of Hindus similar to the world community of Jews that Zionists claim to speak for, is equally flawed.

What does now exist is a network of Hindu supremacist activists in the US, UK, Europe and Australia who seek to clamp down on criticisms of the Modi regime and have most recently been working hard to get Hinduphobia accepted as a form of racism.

Tactics Used in the UK

In each country, these activists adapt their strategy to fit in with ‘local’ conditions.

In the US, universities have been a focus. Last month, they targeted an academic conference critiquing Hindutva – the ideology of the BJP. Participants were sent death threats. One speaker, the poet Meena Kandasamy, had pictures of her children posted online with captions such as “ur son will face a painful death”, as well as casteist slurs. At the same time, there were vociferous claims that the conference was an attack on Hinduism and, as such, Hinduphobic.

In the UK, the Hindu right appears to be following a slightly different route.

In 2018, the Hindu Forum of Britain arranged a private meeting with Gideon Falter, CEO of the Campaign Against Anti-Semitism (CAA). The chair – none other than Conservative MP Bob Blackman, who has a history of hosting Islamophobes – declared that there was a need to “learn from the way the CAA had got the International Holocaust Remembrance Alliance (IHRA) definition of antisemitism passed in the Labour Party” with regards to supposed anti-Hindu sentiment.

A year later, two weeks before the 2019 General Election, a spokesperson for the Hindu Council UK supported Rabbi Mirvis’ claim that the Labour Party is antisemitic and added that it is anti-Hindu too because a conference resolution had criticised Modi’s policies in Kashmir.

More recently, the Hindu right appears to have been attempting to draw in unsuspecting progressives. This has already had some success.

The 1928 Institute claims to be a descendent of the anti-colonial India League which was active in Britain from 1928 in campaigning for India’s independence. However, while the India League saw the struggle in India as part of a larger struggle against imperialism and racism – and included such socialists and anti-imperialists as Harold Laski, Bertrand Russell and Fenner Brockway – the 1928 Institute’s list of ‘notable members’ includes a corporate billionaire who admires Modi. Even the Prince of Udaipur, scion of one of India’s most wealthy oppressor caste Rajput dynasties, is on board. The 1928 Institute told Byline Times it has “diverse members with no influence over the organisation”.

The 1928 Institute has launched ‘non-political’ research into the identity of British Indians. In a discussion on Zoom, a spokesperson told me that its database of British Indians was built up by “kind of reaching out to people”. (The 1928 Institute has subsequently disputed this and said that the research was compiled using “a robust methodology approved by the University of Oxford”). The results were predictable: 80% of those who responded had experienced prejudice as a result of their Indian identity. The most commonly reported type of prejudice was Hinduphobia.

One of its report’s key recommendations states: “It is critical that anti-Indian racism, in particular, Hinduphobia, is acknowledged and addressed by institutions such as media houses and universities. We recommend that this type of discrimination should be framed in a similar, zero-tolerance manner to that of Islamophobia and antisemitism.”

The spokesperson acknowledged that the data sample may have been “skewed” since Hinduphobia was only mentioned by a comparatively small number of people, and that too in optional comments.

The 1928 Institute has subsequently told Byline Times that the findings may have been “misinterpreted” and “misquoted” and stressed that it has no right-wing affiliations. However, its research has given the notion of Hinduphobia an enormous boost and much publicity.

It has been picked up by Hindu right groups across the world as ‘proof’, at last, that Hinduphobia not only exists but affects British Indians more than any other form of racism. In the UK, Samir Shah – one of the authors of the controversial Sewell Report on the findings by the Commission on Race and Ethnic Disparities – has weighed in on Hinduphobia. Racism against Hindus may or may not exist, he says, but “understanding” it will “nip it in the bud”.

Meanwhile, Navendu Mishra – a member of the Socialist Campaign Group of Labour MPs – has tabled an early day motion which “acknowledges research by the 1928 Institute which revealed that 80% of British Indians have faced prejudice because of their Indian identity, with Hinduphobia the most prevalent… and calls on the Government to take steps to urgently address this worrying rise”. It has been signed by 45 MPs, including not only those known to be supporters of Modi such as Barry Gardiner and Bob Blackman (who were awarded the prestigious Padma Shri by the BJP Government), but others one would not expect to see in their company.

While the difficulties these MPs may face in refusing to endorse calls to confront racism are understandable, they need to understand that Hinduphobia is a fabrication and endorsing it in Parliament will help those who stoke the fires of Hindu fascism. They need to realise too that many British Indian communities have been historically opposed to the Hindu right and many others are increasingly horrified by what they see unfolding in India today.