Women, Girls, and Boys are Protesting, Every Taliban Move to Curb Freedoms 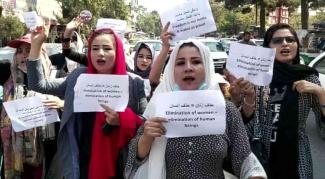 Afghan women and girls are defying Taliban efforts to render them silent and invisible. They are out on the streets, braving Taliban whips and tasers and bullets, protesting the moves to roll-back their freedoms and rights.

Soon after the Taliban announced an all-male interim government, women marched on Kabul streets, with placards declaring “No government can deny the presence of women” and “I will sing freedom over and over.” Some of the placards had the image of a pregnant police officer in Ghor province whom the Taliban is accused of killing in the presence of her family. One of the protestors, held a poster that said "A cabinet without women is a loser, a loser", adding “They hit us with whips and they tell us to go to our homes and recognize and accept the Emirate. Why should we accept the Emirate while no inclusion or rights have been given to us?” Another woman at the protest said the Taliban have “proved that they cannot change,” and referring to US claims to have invaded Afghanistan twenty years ago to defend women’s rights, demanded “Where are those defenders of women rights today?” Another protester said of the Taliban men, “They told us to go home saying that's where a woman's place is.” She added, “They (my family) tell me not to go for protests. They [the Taliban] will kill you. I fought with my brother to attend the march on Wednesday. It's important that we raise our voice. I'm not scared. I will keep going again and again and again, until they kill us. It is better to die once than die gradually.” The Taliban had announced that girls would be “allowed” to study in segregated institutions. But even though most secondary schools for students aged between 13 and 18 are segregated, the Taliban has allowed only boys’ schools to reopen, with a statement saying: “All male teachers and students should attend their educational institutions.” Another statement told female government employees in Kabul city to stay at home. Saleha Soadat, a former journalist with an Afghan news Tolo News, tweeted that thanks to such diktats, “more working women have been affected, and most of these women are unemployed and even in shock how to feed their families.”

A schoolgirl who wants to become a lawyer told the BBC, “"Everything looks very dark. Every day I wake up and ask myself why I am alive? Should I stay at home and wait for someone to knock on the door and ask me to marry him? Is this the purpose of being a woman?” In Herat, thirteen teenage schoolgirls held a protest in their own neighbourhood. One said that not going to school feels as if “we are moving backward” and another said, “We demand that all girls must return to their schools and all the women should be allowed to get back to their work.” Schoolboys protested by skipping school in solidarity with girls, holding placards declaring “We will not attend school till our sisters can” and “I won't go to school without my sister. I support my sister. We are equal.” The storm of protests had the impact of making the Taliban claim that girls’ school would be reopened “soon”. But the schoolchildren are not backing down till the schools actually do open.

Tellingly, the Taliban has shut down the Ministry for Women’s Affairs, replacing it with a ministry for the “propagation of virtue and the prevention of vice”. Afghan women protested outside the new ministry chanting, “you took my holy soil don’t take my education!” and “Elimination of women = elimination of human beings.”