Movements of Farmers, Workers, Youth Intensify Against Yogi Misrule in UP 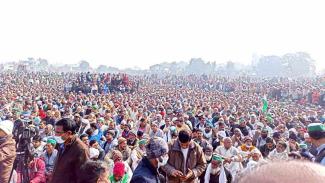 As the Uttar Pradesh Assembly polls due in early 2022 draw closer, the determination and fighting unity of vast sections of UP’s people against Yogi Adityanath’s misrule is growing in intensity.

The most inspiring manifestation of this unity is no doubt the Muzaffarnagar farmers’ panchayat – where lakhs of farmers gathered to issue a veritable war cry against the Yogi and Modi regimes. What was most significant was that the farmers were united not only against the three anti-farmer laws and the repression unleashed on farmers by BJP regimes in UP and Haryana; they also decisively rejected the politics of communal hatred that had helped Modi and the BJP achieve electoral victories in western UP in the parliamentary and assembly elections.

If farmers are leading the way, workers are not far behind. More than 100 organisations of government employees, teachers, officers and pensioners have come together to form a united platform to amplify their voices against the shameful treatment meted out to them by the UP Government headed by Yogi Adityanath. They are incensed that the government has robbed employees and teachers of dearness allowance to the tune of Rs 10,000 crore; has got rid of transport allowance and at least ten other kinds of allowances that these employees used to receive. The contract teachers – ‘shiksha mitra’ teachers – are now paid just Rs 10,000 a month instead of the Rs 45,000 they used to receive. As a result, a large number of such teachers have committed suicide due to deprivation and desperation. Teachers in non-funded schools are no longer being paid honorariums; and more than 2000 teachers in Kasturba Gandhi girls’ schools have been laid off. Principals’ posts in Basic schools have been done away with, thus depriving teachers of promotion opportunities. And of course, over 1600 teachers and employees in the Basic Education department were killed through Covid-19 because they were forced to perform poll-duty even when sick, at the height of the second wave.

Uttar Pradesh’s youth too are in no mood to forgive the Yogi and Modi regimes for the historically high levels of joblessness in the state and the country. Student and youth groups have come together to hold a convention for the Right to Work at the state capital Lucknow. They are pointing out that suicide cases in India due to unemployment have increased by 24 per cent from 2016 to 2019. The figures in these National Crime Records Bureau (NCRB) records pertain to data before Covid-19 hit the country. So the job losses and related suicides have only gone up further in the last two years. Calling out CM Yogi’s lie that unemployment rates have fallen dramatically in the State, they are demanding that the government stop fudging job-loss data and acknowledge the crisis of joblessness that besets people in the state. In particular, they demand to know why the government has failed to fill even existing government posts: a fact that points to rampant corruption in this matter. As per data compiled by the Bureau of Police Research and Development, for example, Uttar Pradesh topped all states in the number of posts (1,11,865) lying vacant in the state police.

Chief Minister Yogi Adityanath’s claim of zero-tolerance towards corruption is proving a joke, as a letter from the Director-general of Basic Education has exposed financial irregularities to the tune of Rs 9 crore, misappropriated from funds meant for Dalit schoolgirls in the Kasturba Balika schools. Another case of corruption emerged in the King George Medical University (KGMU) where medical kits used for Covid-19 treatment have been purchased at much higher rates compared to other states. Even the son of a sitting BJP MLA has alleged that corruption is rampant at all levels of government under Yogi Adityanath.

The Yogi regime’s boast of curbing crime is an even more cruel joke, contrasting starkly with the complete collapse of law and order, rampant mob lynchings of Muslims and rapes all over the state. It is a full year since the infamous Hathras gangrape and murder took place, where the UP police was caught in the act of forcibly burning the Dalit victim’s body at night to destroy evidence. The victim’s family is yet to receive any measure of justice, and has not even got the compensation funds, job and home promised to them by the CM himself. The latest NCRB data shows UP topping the list of murders, crimes against women, and atrocities against Dalits; and is second only to Rajasthan when it comes to rapes. The CM claims that crimes against women declined in UP in 2020 due to the UP police’s “Mission Shakti” – but that is a lie. In fact, registered cases in certain categories of crimes against women, mostly cases of “cruelty by husband or his relatives”, have declined all over India in 2020. This is no achievement to boast of – rather it is a failure; domestic violence cases against women actually rose during the lockdown, but could not access police and the help of women’s groups to register complaints.

The NCRB data establishes the Yogi regime as the most repressive and undemocratic one in India: UP is among the top four states (the other three being being Manipur, Assam, and Jharkhand) when it comes to cases registered under the draconian UAPA and sedition laws – and it is the only state without the pretext of any ongoing armed insurgency to record such high numbers.

The Yogi regime has distinguished itself by its violence against minorities, women, Dalits; the lawlessness of its police force; its protection of rapists; joblessness and hunger deaths; the worst record of handling Covid-19 resulting in the grim image of the corpses in the Ganga; repression and crackdown on basic civil liberties. Its only answer to all these issues has been to turn up the heat of venomous rhetoric and violence against Muslim minorities. But the growing unity and resistance among farmers, workers, and youth raises hopes that the people of UP will punish the communal, corrupt, incompetent  and repressive misrule of Yogi Adityanath and send it packing.